Livni and Peres conspire with Kerry — against Israel

Posted on December 21, 2014 by Victor Rosenthal 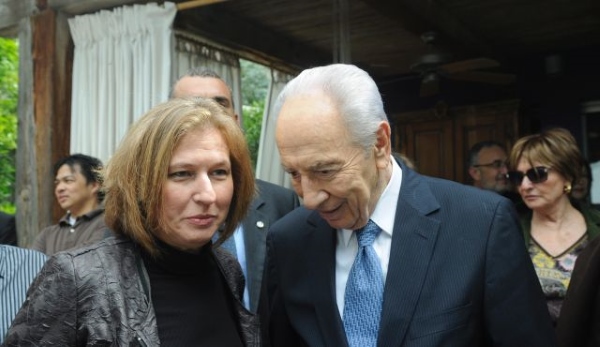 As you may remember, Shimon Peres and Yossi Beilin carried on pre-Oslo agreement negotiations with the PLO behind the backs of Prime Ministers Shamir and Rabin, and then presented the deal as a fait accompli to Rabin. One doesn’t know how Rabin felt about it in his heart (although the look on his face when he shook hands with Arafat on the White House lawn might give us a clue), but publicly he had no choice but to embrace the initiative and do his best to minimize the damage.

Communicating with the PLO was still against the law in Israel in 1992, and while a Foreign Minister — as Peres became in Rabin’s administration — is certainly permitted to engage in secret diplomacy, to do so in such a sensitive context without notifying the PM is unethical and borders on treason.

But Peres got his Nobel prize (and Israel got the Second Intifada and more than a thousand fresh graves) as a result. And now he — along with one of the most cynical of Israeli politicians, the drooling-with-lust-for-power Tzipi Livni, he has apparently engaged yet again in private diplomacy.

Livni confirmed that she and Peres, now a private citizen,  approached US Secretary of State John Kerry and suggested that he delay the UN Security Council vote on a PLO proposal to force Israel to withdraw from Judea and Samaria until after Israeli elections, because a vote now would help her opponents Benjamin Netanyahu and Naftali Bennett. According to a report in Foreign Policy Magazine, Kerry told EU envoys at a recent meeting in that the US would indeed follow their advice.

“Kerry has been very, very clear that for the United States it was not an option to discuss whatever text before the end of the Israeli election,” according to a European diplomat.

The diplomat, who spoke on condition of anonymity because the luncheon was confidential, said that Kerry explained that Israel’s liberal political leaders, Shimon Peres and Tipzi Livni, had expressed concern that a Security Council move to pressure Israel on the eve of election would only strengthen the hands of Israeli hardliners, including Prime Minister Benjamin Netanyahu, and Naftali Bennett, an implacable foe of a Palestinian state and leader of the right-wing Jewish Home party. Netanyahu is also fiercely opposed to the Palestinians effort to secure Security Council backing for its statehood drive.

It’s hard to imagine worse behavior for a political candidate than to conspire with a foreign power — one whose objectives in this area are clearly opposed to Israel’s — in order to advance her candidacy, which is what Livni has done (with the help of practiced conspirator Peres).

The State Department has recently strongly suggested that the US would veto such a Palestinian resolution. Postponing the vote might well be against Israel’s interest, since it’s hard to predict what the US attitude will be in the future.

But apparently Livni and Peres think it is in the interest of the Labor party. Because nothing is more urgent for the impotent Left than getting into power.

2 Responses to Livni and Peres conspire with Kerry — against Israel