Posted on December 23, 2014 by Victor Rosenthal 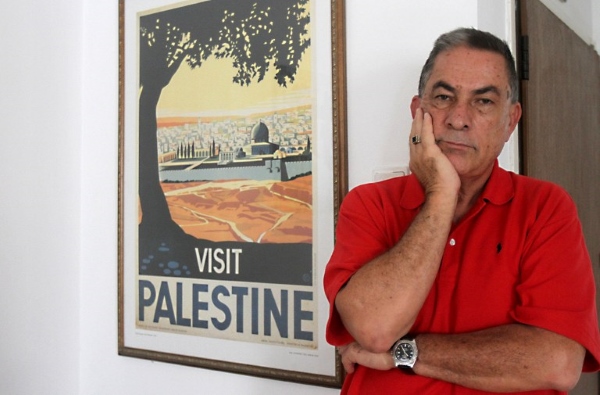 Gideon Levy of Ha’aretz, probably the most anti-Israel of left-wing Israeli journalists (and that is quite an accomplishment), was detained by the police yesterday.

I’ve been advocating this for a long time, since Levy clearly belongs in prison. Unfortunately, Israel is a liberal democracy, and we don’t arrest writers for sedition. So in order to be arrested, Levy had to spit and curse at IDF personnel who tried to prevent him from entering Area A — the part of Judea/Samaria under full Palestinian Authority control — without a permit.

The permit is required in order to protect Jewish Israelis from Arabs who might tear them limb from limb or stone them to death. Levy would probably write that this is because of their frustration with ‘the occupation’, but actually it is for the same reason that they cut the throats of 3-month old babies, run people down with cars (and if they don’t die, jump out and stab them), or invade synagogues with meat cleavers.

It is more than a political issue, it is very personal and would not be solved if we met all of their demands. Do I ‘dehumanize’ Palestinians? Levy would say yes. I say they do it themselves.

The police released Levy after questioning. I can imagine the conversation:

“Mr. Levy, why did you spit at and curse the soldiers who were protecting you by doing their jobs?”

“Because I hold the Jewish state in contempt and I have absolutely no respect for the government, police or IDF.”

“Oh, well, that’s perfectly normal for a Ha’aretz writer. You can go now.”

Levy created a stir when he wrote an article in July viciously criticizing Israeli pilots who bombed targets in Gaza during the recent war (as well as practically every Israeli who is required to fight to protect his home from screaming Arabs with meat cleavers). Here is a bit of it:

They sit in the cockpit and push buttons and joysticks. It’s a war game. They determine life and death, from their lofty place in the sky they see only black dots running around in panic, fleeing for their lives, but also some who wave their hands in terrible fear from the roofs. The black arrow points at the target, and already a mushroom of black smoke rises – poof, a slight tremor in the wing, as the saying goes; a “good” hit, and they’re already embarking on the next sortie. …

And they will forget what they did during their military service. Forget? They never really knew. From the F-16 you can’t see very much. They are not Border Policemen who chase children in the alleyways, beat and abuse them. They aren’t members of the Golani Brigade who invade homes in the middle of the night, in search and kidnap operations. Nor are they soldiers from the Kfir Brigade who stand at the checkpoints. Nor members of the undercover Duvdevan unit or the Duchifat battalion. Nor do they use foul language or humiliate others. Their language is clean. They are the pilots. His Majesty’s pilots, in the most moral army in the world. …

I would like to meet the pilot or the operator of the drone who pushed the death button. How do you sleep at night, pilot? Did you see the pictures of the death and destruction you sowed – on television, and not just in the crosshairs? Did you see the crushed bodies, the bleeding wounded, the frightened children, the horrified women and the terrible destruction you sowed from your sophisticated plane? It’s all your doing, you excellent young man.

The article goes on to suggest that the pilots should refuse to obey orders, and because of this a complaint was filed with the Attorney General. But as I said, Israel is a liberal democracy and we don’t imprison writers for writing almost anything, unless they are Meir Kahane.

If they are Gideon Levy they are paid a handsome salary.