Do we want a female Putin for PM?

Posted on December 14, 2014 by Victor Rosenthal 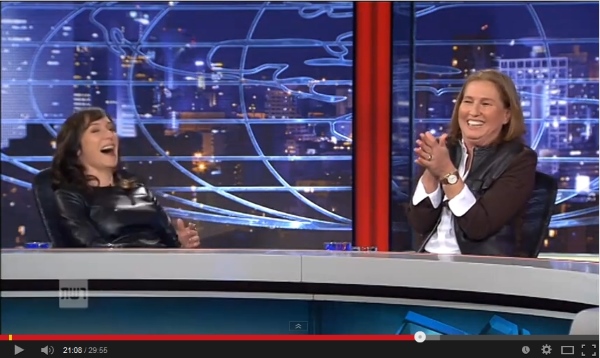 Tzipi Livni (r) breaks up during a remarkably rude and vulgar performance on Israeli TV show “Matzav Ha’uma.” She has just used an Arabic expression meaning “your mother’s genitals”

You probably know that Tzipi Livni, whose own party was expected to fail to get the minimum amount of votes to enter the Knesset, somehow managed to convince the Labor Party leader, Isaac Herzog, to form a partnership in which, if elected, they would take turns being Prime Minister. In one fell swoop she has transformed almost certain defeat into a shot at the top spot in the nation.

Although Netanyahu’s Likud and various right-of-center parties are expected to form the coalition, there is a possibility that several of the medium-sized parties could swing to the Left and join with Labor. In Israel, whatever group of parties that can get together 61 mandates can form a government even if the single party that got the most votes is not among them.

So if a labor-led coalition comes about, a person who (in American terms) would not be elected dog catcher by the voters could become Prime Minister. This is ironic, since one of Livni’s most oft-repeated complaints about her opponents is that they are anti-democratic.

In an appearance on the satirical TV program “Matzav Ha’uma” (State of the Nation) last night, Livni demonstrated how totally unsuited she is to any public position.

She began by joking that two prime ministers with “potential” were better than one “impotent” one. Then she said that she and Herzog would “take out the garbage” together, implying that Netanyahu was the garbage. She referred to him as a “zero,” to applause and cheers from the audience. But those remarks were just a warmup.

Here’s the background: Livni was one of the ministers whose firing by Netanyahu precipitated the present crisis (Netanyahu accused her and Yair Lapid of planning a “putsch,” leaving the government and joining with opposition forces to create a new coalition without elections). Another contentious issue was the “Jewish state” law, which she decided to oppose, even though the cabinet had voted in favor of it.

One of the program hosts made a remark about the Jewish state law and the Arabic language — an early version of the bill declared that only Hebrew would be the official language of the state. Then the dialogue went like this:

HOST: …so I thought, how would it be possible to get past the moment of the firings, without…
LIVNI: … without being able to say [Arabic expression meaning “your mother’s genitals”]

Yes, she said this on television. The audience loved it. If you understand Hebrew, the program is here and Livni comes on at about 11:48 into it. Of course Vladimir Putin can get pretty insulting and vulgar too — but do we want a female Putin for PM?

I’m sure Livni’s supporters will say that maybe she was just extra enthusiastic after her success in bamboozling Herzog. On the other side, Likud minister Yisrael Katz wondered half-seriously if she were on drugs.

But it’s not as if her performance in government has been so great that her inappropriate rudeness and vulgarity can be overlooked. As Foreign Minister in the execrable Olmert government, she oversaw the negotiations at the end of the Second Lebanon War that culminated in the toothless UNSC resolution 1701 that allowed Hizballah to rearm. Today it has as many as three times the number of missiles it had before the war in 2006.

Livni initially ran for the Knesset as a Likud member, and then jumped to Sharon’s Kadima party where she strongly supported the ill-fated withdrawal from Gaza. Next she dumped Kadima and formed her own party, Hatnua which joined Netanyahu’s coalition on the condition that she be Justice Minister. She admits (in a less funny moment of the TV interview) that she has done her best in that position to sabotage the legislative efforts of the more right-leaning members of the ruling party.

Livni presided over the fruitless negotiations with the Palestinian Authority in the present government, and favors a “peace” agreement with the PA, despite the fact that a withdrawal from the territories would be a strategic disaster. She is one of the favorite Israeli politicians of the Obama Administration and of New York Times op-ed writers, and we can expect that they will do what they can to help her and Herzog defeat Netanyahu in the March elections.

Her cynicism and desire to obtain power no matter what is remarkable, even for an Israeli politician. And her arrogance and narcissism come through loud and clear in the TV interview. That program — the hosts, the audience, and most of all Livni — represent what is to me an ugly side of Israel. The cynical, dishonest and defeatist side.

So here’s an antidote: Naftali Bennett. This is a long video (in English), but if you don’t know Bennett it’s worth your time.

1 Response to Do we want a female Putin for PM?