Posted on November 5, 2014 by Victor Rosenthal 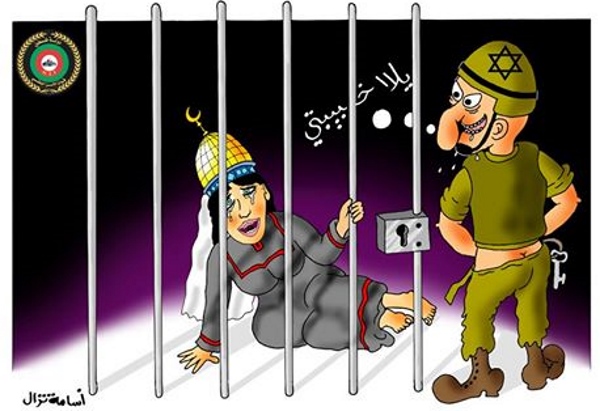 There was another automotive terror attack in Jerusalem today, when Ibrahim al-Akari of Jerusalem’s Shuafat neighborhood plowed his van into a crowd waiting at a light rail station on Shimon Hatzadik Street. This time one person was killed and 14 injured, some seriously, including a border patrol officer. After the van struck an obstacle, al-Akari jumped out of the vehicle and attacked police with a metal bar. He was shot and killed by Border Patrol officers.

This follows the very similar incident a couple of weeks ago in which 3-month old Chaya Zissel Braun was murdered, and the attempted assassination of Rabbi Yehuda Glick last week.

This attack and others like it didn’t just happen. Official Palestinian media and the leader of the Palestinian Authority, Mahmoud Abbas, called for Arabs to ‘defend al-Aqsa by any means’ against the nonexistent Jewish plan to destroy the mosque and replace it with a third Temple. The first two murderers were praised — again by the official media and Mahmoud Abbas — as heroes and martyrs, and doubtless al-Akari will get the same treatment.

In the first two cases, the US State Department spokesperson deplored the violence (it happens that both Braun and Glick were US citizens), and then called on “both sides” to exercise restraint.

Hateful incitement to murder appears every day in the Palestinian media, as the cartoon at the top of this post illustrates. I’ll quote Palestinian Media Watch:

A cartoon showing an Israeli soldier about to rape the Al-Aqsa Mosque portrayed as a woman in jail was posted today by the National Security Forces of the Palestinian Authority. A woman is weeping in a prison cell while an Israeli soldier is undoing his pants outside the cell, saying: “Come on, sweetheart.” The woman is wearing a headdress shaped as the Dome of the Rock. The cartoon appeared with the text: “Daily cartoon: Al-Aqsa is being raped.”

PA Chairman Abbas himself implicitly called for the use of violence to protect the Al-Aqsa Mosque, and praised the terrorist who tried to kill Rabbi Yehuda Glick as a “Martyr” who died “defending our people’s rights and holy places,” as reported by Palestinian Media Watch.

Recently, the official PA daily also published two cartoons, which promoted the use of violence to defend Muslim holy sites.

Can you imagine such incitement in American or Israeli media? Can you imagine the US President or Israeli Prime Minister praising the perpetrator of a murderous terrorist attack? But this is business as usual for the Palestinian Authority!

Why does the US, whose administration officials express “red-hot anger” against Israel and its Prime Minister for announcing plans to build a few apartments in places that couldn’t possibly become part of a Palestinian state even if the Palestinians were capable of making peace, stay silent about a Palestinian ‘President’ and media that encourage murder and terrorism?

Since the signing of the Oslo accords, the Palestinians have promised countless times to stop incitement. It wouldn’t be hard — the official media is tightly controlled (and of course Mahmoud Abbas is presumed to control his own mouth). But they have never taken even minimal steps to end the flow of hate in their media, mosques, schools, etc.

Which do you think is more responsible for the lack of peace; the building of some apartments in Jewish neighborhoods of Jerusalem, or the expressions of hate coming from Abbas and his PA?

This entry was posted in 'Peace' Process, Terrorism. Bookmark the permalink.