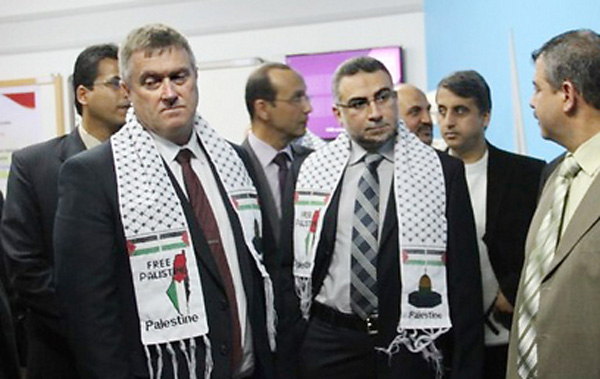 A photograph has emerged of UK Consul General to Jerusalem Alastair McPhail wearing a keffiyeh scarf that bears the image of a Palestinian flag superimposed over a map of the whole of Israel, West Bank and Gaza, with the words “Free Palestine” emblazoned next to it.

The image appears on the Islamic Relief Palestine website, under the headline “British Consulate visits Islamic Relief in Gaza”, and was taken during a visit McPhail paid earlier this year to Gaza City for the opening of a new lab at Al-Azhar University, a project apparently co-sponsored by the British government.

The design of the scarf appears to advocate the destruction of Israel and the creation of a Palestinian state in its stead.

Right-wing website Breitbart reported Monday that it had contacted the British Foreign Office about the issue, but the FO refused to refer directly to the image. The query, Breitbart said, “was met with a pro-forma response about the two-state solution, largely ignoring our line of questioning about the appropriateness of the scarf.”

I don’t know why this should be so shocking. The UK is full of politicians who apparently think that Hamas deserves their support. It is, after all, the home of the unique George Galloway and of MP David Ward (who said that if he lived in Gaza, he would fire rockets into Israel).

Mr. McPhail must believe statements like these, which are part of the Hamas charter:

There is no solution for the Palestinian question except through Jihad. Initiatives, proposals and international conferences are all a waste of time and vain endeavors. The Palestinian people know better than to consent to having their future, rights and fate toyed with.

“The Day of Judgement will not come about until Moslems fight the Jews (killing the Jews), when the Jew will hide behind stones and trees. The stones and trees will say O Moslems, O Abdulla, there is a Jew behind me, come and kill him. …”

Either that, or he hasn’t read it. I think he should be forced to read it aloud, all of it, including the parts that are copied from the Protocols of the Elders of Zion, and indicate exactly what he agrees and disagrees with.

He should also explain what he would like to happen to Israel’s Jews, assuming that he gets his way and Hamas triumphs. Actually, he should be prepared to kill a Jew or two himself in that case (they could be small ones to reduce the risk). Put his money where his mouth is, so to speak.

I’m sick of the McPhails of the world who in essence advocate murder of the form carried out by Hamas’ barbarian political and spiritual cousins in ISIS, but pretend not to be barbarians themselves. McPhail is from Glasgow, whose city council has recently begun to fly the Palestinian flag, but as a diplomat he should be better educated.

Here is a golden opportunity for the British people to take action to prove that they really are the decent, civilized folks that they would like to be. McPhail is a career diplomat, not a politician elected from a majority Muslim district. He can be disciplined. He should be.

2 Responses to British Consul General in Jerusalem sides with Hamas