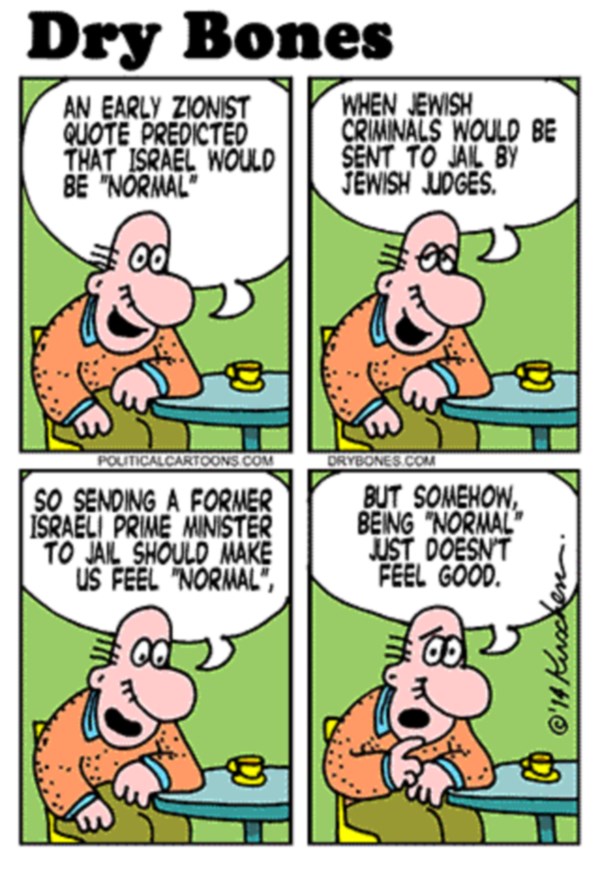 Following the sentencing of former prime minister Ehud Olmert on Tuesday to six years in prison, the Israel Prison Services geared up for the unique logistical difficulties of housing and protecting an inmate with unique knowledge of state secrets. …

Olmert will most likely not be held in solitary confinement, and therefore the security arrangements also entail the selection of prisoners to be held alongside him without compromising his safety. According to Israel Hayom, the possibility of creating a separate wing for all the prisoners in the Holyland graft case has not been ruled out.

I am having difficulty finding an example of another chief executive of a Western-style democracy who has actually served time in prison. Italian Prime Minister Silvio Berlusconi was convicted of tax fraud in 2012 and sentenced to four years, but that was reduced to one and that one was converted to community service. More recently, he was found guilty of having sex with an underage prostitute and sentenced to serve 7 years, but is presently free pending appeal. He is also in hot water over a wiretapping scandal, also pending appeal, and has other legal problems. But I don’t think he will be putting on an orange jumpsuit (or whatever convicts wear in Italy) soon.

The idea of a special wing for Olmert and other high-profile grafters is interesting. Somehow I suspect the beds would be more comfortable, the food better. Maybe a TV series based on their experience will come out of it. But prison is still prison.

Alan Dershowitz thinks the sentence passed on his friend is too heavy:

Yet when the judge Tuesday imposed a six-year sentence on Olmert for conduct that went back to his years as mayor of Jerusalem, he apparently refused to give the former prime minister sufficient credit for his good works – most of which came after the events for which he was convicted. To the contrary, the judge seems to have held Olmert’s distinguished political career against him. He justified the long sentence, at least in part, on the fact that Olmert had been a public servant and that his conduct as mayor of Jerusalem made him the equivalent of a traitor to the nation-state of the Jewish people. This seems grievously wrong to me.

I am neither an expert on Israeli sentencing law, nor am I intimately familiar with the underlying allegations in the criminal case against Olmert. But it seems wrong for a judge to consider a defendant’s long record of public service only as an aggravating matter in sentencing and not as a mitigator of a harsh sentence. The Supreme Court of Israel will ultimately decide whether the six-year sentence was justified as a matter of law, but it seems clear to me as an outside observer that it is excessive as a matter of justice.

Dershowitz is wrong. In fact, he has it precisely backwards. If it had been an ordinary policeman, say, who was taking bribes to feed his family, that would be a case where leniency might be appropriate. But Olmert was in a position of great trust.

I admit that I don’t find myself agreeing with Dershowitz that Olmert was such a wonderful public servant, even apart from the graft. But that’s not the point. He was not arrested for his part in bungling the Second Lebanon War in 2006, for his defeatist philosophy, or for trying his best to give the country to Mahmoud Abbas in 2008.

What he did was damaging far beyond the value of the bribes that he took. There is something particularly destructive about high-level malfeasance: it breeds more corruption. Why should the lower ranks do their jobs honestly and competently when their bosses are on the take? The poison drips down from the top, and ultimately affects the entire edifice of government.

But not only is the crime especially grave, the punishment can also do great good. If the legal system can put an ex-PM in prison for graft, it can also be a message for the smaller-time operators, a message that no one is above the law.

I agree with cartoonist Yaakov Kirschen: it doesn’t feel good. But lock him up anyway.

1 Response to Lock him up