The Arrogance and Ignorance of Tikkunist Jews 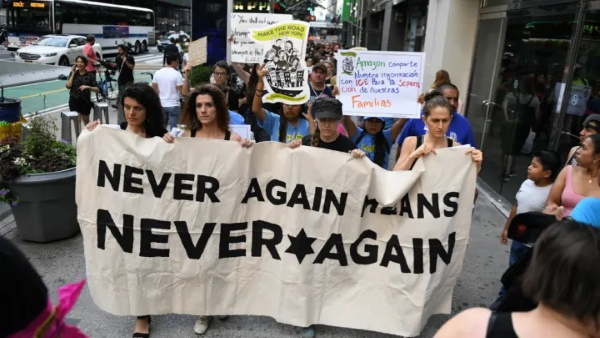 You want to know what’s wrong with progressive American Jews? Here it is:

NEW YORK — Jews across the United States took to the streets on Sunday, marking Tisha B’Av (the Jewish day of mourning) with protests against the Trump administration‘s treatment of undocumented immigrants and asylum seekers.   In New York City, during the fast day commemorating the destruction of the two Jewish temples in Jerusalem, over 500 Jews joined the “Close the Camps” demonstrations, holding signs reading “Never Again.”  Participants first gathered at Congregation Beit Simchat Torah in Manhattan for learning, prayer and activities. Some made signs, others participated in a songwriting workshop or text studies of letters from refugees. …

“This is personal for the Jewish community,” Rabbi [Yael] Rapport told Haaretz, holding back tears. “Public outcry, especially in our modern age, can really change attitudes, and change policy. This is a deeply Jewish thing to do.”

Before you jump all over me for being an evil, fascist, deplorable Trump-lover, I wish to announce that I, as an Israeli citizen who has not set foot in the USA for five years, do not have an opinion about Trump’s treatment of immigrants. It isn’t my issue. It is up to the Americans who live there to decide how to protect their borders (or not, if they choose) – just like Americans do not have the right to tell us how to defend our border with Gaza.

Although I might argue with the participants in these demonstrations about whether their religious practice is actually Judaism (I call it “Tikkunism”), I believe that they have a right to their religious beliefs. Although I think that Tisha b’Av has nothing to do with immigration policy, I think that they have a right to believe whatever they want to.

What they do not have a right to do, what I find infuriating, what exemplifies their arrogance and lack of respect for personal boundaries, is to insist (“this is personal for the Jewish community … this is a deeply Jewish thing to do”) that they speak in the name of all Jews and Judaism.

Of course they do not speak for “the Jewish community!” Who gave them that right? There is no reason they should not demonstrate – as progressives, as Democrats, as concerned Americans. But not as Jews.

There is also their misuse of the Holocaust metaphor. Seriously, is temporarily detaining illegal border crossers and asylum seekers anything like shooting and gassing millions of people because they are Jews? Are they ignorant enough to think so? As the saying goes, “if everything is the Holocaust, then nothing is the Holocaust.”

It’s not as though they don’t understand what it is to transgress personal boundaries. “Not in my Name” is a popular slogan for left-wing Jews calling for Israel to withdraw from Judea/Samaria or to remove the partial blockade of Gaza. It bothers them when the government of Israel acts as if in the name of the Jewish people. But they seem to have no problem with themselves speaking in the names of others. Why?

This isn’t an accident. It is in part a strategy to draw attention to their campaign with their outrageous claims, but also it is a Tikkunist religious ritual intended to produce a psychological feeling of satisfaction, similar to the satisfaction traditionally religious people obtain from prayer or other rituals. And by imputing religious motives to their political activity, and implying that all Jews must share the obligation to act similarly, they validate their Tikkunism as a legitimate form of Judaism.

But Tikkunism is a radical departure from traditional Judaism. Reform Judaism deemphasized the “ritual” commandments like observance of kashrut and Shabbat, while emphasizing the “social” commandments like concern for strangers, widows, and orphans, and the political vision of the Prophets. Tikkunism goes even farther and redefines the social commandments and in terms of progressive politics. For example, the “stranger” (ger) in the Torah, who in traditional Judaism is a convert to Judaism or a non-Jew living in the Land of Israel and obeying the Noachide commandments (ger toshav), becomes any outsider – even a Palestinian terrorist or an illegal immigrant. The injunctions of the Prophets are also interpreted in the most extreme left-wing way possible.

In the past decade or so, the leadership of the Reform Movement, its membership eroding, has consciously chosen to adopt Tikkunism as a way of generating excitement and commitment from its members. In today’s politically charged America, it may be a good strategy; but it takes the movement even farther from traditional Judaism.

And the Tikkunist ritual of self-justification is insensitive, insulting, and offensive to those who do practice Judaism.

This entry was posted in American Jews, American politics. Bookmark the permalink.

1 Response to The Arrogance and Ignorance of Tikkunist Jews