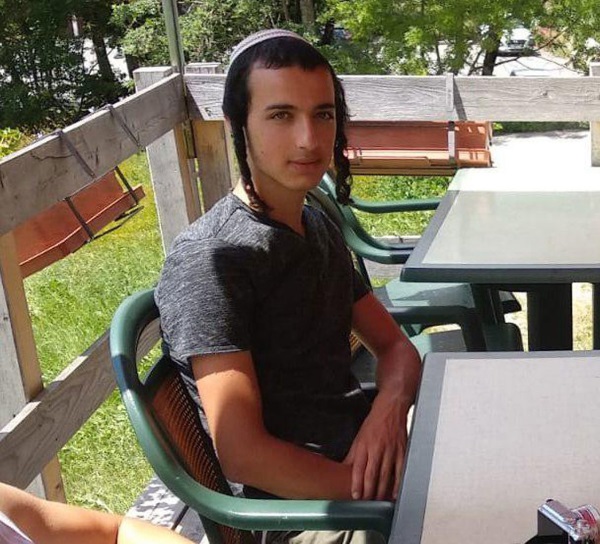 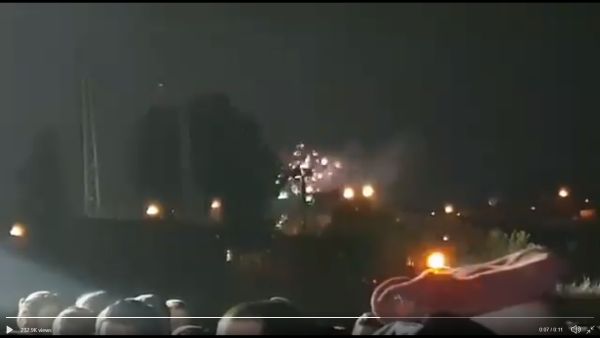 Fireworks set off by Palestinian Arabs in nearby village of Silwad in an attempt to disrupt the funeral of Dvir Sorek, z”l ( screen capture, courtesy of Israel Hatzolah)

Today Jews are observing the fast of the 9th of Av, commemorating the destruction of the Jewish Temples in 586 BCE and 70 CE. They are abstaining from food, sex, or anything pleasant that might distract them from contemplation of the horrific death, destruction, and dispersal that occurred millennia ago, and indeed also of more recent events. By coincidence, today is the beginning of the Muslim holiday of Eid al Adha, which is celebrated by the mass slaughter of animals.

Israeli Jews are also contemplating the vicious murder of Dvir Sorek, an 18-year old yeshiva student and IDF soldier on Wednesday night. Sorek was set upon by two Palestinian Arab terrorists as he walked the 200 meters from a bus stop to his yeshiva in the Judean community of Migdal Oz, and stabbed many times. He was in civilian clothes and did not have a weapon.

Another young Jew brutally murdered for the “crime” of being a Jew – in Judea.

In case anyone might believe that such acts are applauded only by “a few extremists,” I’ll note that Palestinian Arabs gave out candy to celebrate the murder, set off fireworks (video) to try to disrupt Dvir Sorek’s funeral, and rioted to interfere with the arrest of the suspects in his murder.

Two suspects were arrested by Israeli security forces, as well as several others that assisted them. The headline of today’s paper read “the account is settled.”

The two murderers are headed for a cushy stay in an Israeli prison, whose humanitarian standards are matched only in Scandinavian countries. They will be in a special section for security prisoners, where they may have cellular phones smuggled in for their use (perhaps by members of the Knesset) and semen smuggled out to impregnate their wives. They will be paid handsomely by the Palestinian Authority, and their families taken care of. If their homes are demolished, the PA will pay for new ones. If they are very lucky, they will be released early as ransom for kidnapped Jews, like Ahlam Tamimi, the woman who planned the Sbarro Pizza bombing and drove the suicide bomber to the site in 2001. She received a sentence of 16 consecutive life sentences plus 15 years, but was released after only 10 years as part of the deal for kidnapped soldier Gilad Shalit.

I’ve called for a death penalty for terrorist murderers (and so have numerous Israeli politicians), but it is unlikely that it will be enacted; and if it were enacted, it would be unlikely that executions would be carried out. There are multiple reasons, but the main one is that every time a prisoner were about to be executed, there would be riots in the streets, resolutions at the UN, protests at our embassies, and so forth. The IDF and Shabak (General Security Service) oppose it. It is not going to happen.

There is a problem here, and it won’t be solved by passing a law. It is a problem of European diaspora-trained consciousness trying to survive in a Middle East to which it is ill-adapted.

Western – that is, European – morality has developed in such a way that “settling accounts” is not considered a good reason for acting. The European view is that such behavior is atavistic, as is tribal or ethnic loyalty. European morality venerates humanity and denigrates tribalism. European morality thinks that honor is subjective and unimportant. But to Middle Eastern sensibilities, nothing is more important.

By behaving like Europeans in the Middle East, Israelis place themselves at a severe disadvantage. The Arabs see the Jews as their enemies. An enemy is a member of a group that wants to kill you, and that you should kill first if you can do so. Since 1945, Europeans have stopped believing in enemies; today there are only communication problems.

About half of Israel’s Jewish population has roots in the Arab/Muslim diaspora. In general, they understand the Middle East much better than those whose ancestors lived in Germany or Poland. So in March of 2016, when IDF soldier Elor Azaria encountered a wounded terrorist who had just stabbed and tried to kill his friend, he did the natural and appropriate thing for the Middle East, which was to shoot the terrorist and kill him.

This act placed the country as a whole in a quandary. First of all, Azaria was a soldier, and what he did was a violation of the rules of engagement, a standing order. Second, some Israelis thought that it was morally wrong to kill a wounded terrorist, while others thought that it was praiseworthy. The military and legal establishment mostly fell into the former group, while the majority of Israeli Jews belonged to the latter one; and many of them were not ashamed to express themselves in demonstrations on behalf of Azaria.

What happened was quite interesting. Azaria argued that he believed that the terrorist might have an explosive vest and was a danger to his life and to others. The court’s verdict showed that he did not succeed in convincing the judges, and I don’t think most Israelis believed him either. But nevertheless, Azaria was convicted of manslaughter and not murder, and given a relatively light sentence which was later further reduced – probably because of the force of public opinion.

The Israeli Left, which despises both the Arabs that it pretends to care about, and the Mizrachi Jews that it does not, was outraged. But anyone who understands the schizophrenic nature of Israel’s relationship to the Middle East in which it exists knows what happened and why.

This will not be comfortable for those who think that Israel should be a “villa in the jungle” (a metaphor attributed to Ehud Barak) in the Arab Middle East. But the Jewish people are a Middle Eastern people, whose ancient ethos is much closer to that of today’s Arabs than to that of the post-Christian Europeans. Just read the Torah if you want to know what we used to be like.

I am not suggesting that we go back to committing genocide (as biblical peoples had to do to survive). But I do think that it is absolutely necessary for our honor and for our deterrence that we truly settle accounts with the murderers of Dvir Sorek. They should not have survived arrest.

And I’ll go further and add that we also have an account with the “Palestinian people.” They – as a society – have become comfortable with the idea that we will not avenge their murderous acts, and that they have a perfect right to burn our land, to shoot at us, and to murder or rape any Jew that they manage to catch undefended. We should respond to these acts in a disproportionate and terrifying way.

This entry was posted in Israel and Palestinian Arabs, Israeli Society, The Jewish people. Bookmark the permalink.

3 Responses to Tisha b’Av, in Judea