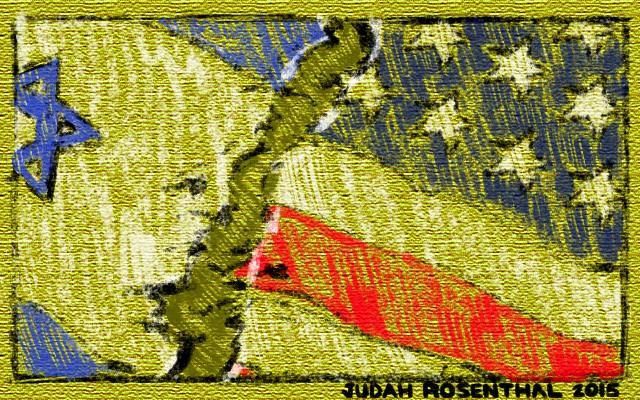 Since the election victory of PM Benjamin Netanyahu, the Obama Administration has mounted an unprecedented assault on the PM and the state of Israel in the arena of American public opinion. While other presidents have taken steps to pressure Israel into acting in accordance with their wishes, never has one tried to sabotage the majority support that Israel has historically received from ordinary Americans — until Barack Obama.

The president’s approach has been direct and brutal. He has insulted and tried to diminish Netanyahu at every turn. He misrepresented what he said about a Palestinian state — the phrase ‘lied about’ wouldn’t be inappropriate — and refused to accept a clarification, making it clear that he considers the PM insincere. His surrogates and compliant media called the PM a racist, a “chickenshit” and a coward, said that he “spat in the president’s face,” and accused Israel of spying on the US (which Israeli officials deny). The president has reportedly been “enraged” and “furious” at Netanyahu, apparently the only foreign leader that has this effect.

The Jewish Left in the US is, as always, firmly behind Obama, but some of the centrists are beginning to become aware that something at the White House is not, er, kosher.  Abraham Foxman of the ADL, normally a pro-administration voice, said,

As someone who was critical of several steps by [Netanyahu] during the campaign leading up to his re-election, I am even more troubled by statements now coming out of the White House.

The prime minister has quickly made significant steps to repair the tensions that developed in the heat of Israel’s election. The time is due, if not overdue, for the US administration to do the same.

I don’t expect that it will. This smells like much more than a fit of pique provoked by Netanyahu’s congressional appearance and his election rhetoric (speaking of rhetoric, compare Iran’s “death to America” chants). Obama has been trying to distance the US from Israel from the day that he came into office, and Netanyahu’s interference in Obama’s plan to align the US with Iran against Israel and the Sunni Arabs has only amplified his desire.

Obama seems to have made a considered decision to turn US policy on its head in the Middle East, abandoning traditional allies and making new ones. The most generous explanation is that the president thinks that an Iranian empire can be a stabilizing force, a bulwark against Islamic extremism. He seems to believe that if Iran is allowed to crush its Sunni enemies, take control of the region’s oil reserves, obtain nuclear capability (and by the way destroy Israel), then the region will be in good hands, and the US can safely withdraw to concentrate on domestic issues.

Somehow he fails to see (or pretends not to) that Iran’s jihad is no less aggressive than that of the Islamic State, only with a slightly different ideological underpinning. Once they have digested the Middle East, the mullahs have made it clear that they will turn to Europe and ultimately the US.

Regardless of Obama’s motives, there is no way that this policy can be good for Israel, and Americans understand this. Popular support for Israel in the US, always reflected in Congress, is thus a stumbling block that he wants to eliminate.

Will his party pay a political price for it? I don’t think so. He seems to have adopted a slogan similar to James Baker’s famous “F— the Jews, they don’t vote for us anyway,” replacing ‘Jews’ with ‘Zionists’. Obama’s Jewish supporters in J Street and the Union for Reform Judaism will stick with him, while they claim that his actions are for Israel’s own good. Actual Zionists, of both the Jewish and Christian variety, are more likely to already be Republicans, so the electoral effect will be minimal.

The anti-Israel PR from the administration meshes well with the pervasive campus anti-Zionist movement led by Students for Justice in Palestine and similar organizations (conspiracy theorists are invited to think of the role played by Obama friend Ali Abunimah). With so much of the media in the pocket of the administration along with the institutions that educate the youth, it is hard to believe that the traditional support for Israel will continue for much longer (unless, of course, there is a major change in the American political landscape, something I don’t expect).

Anti-Israel attitudes have a way of slopping over into anti-Jewish ones. Expect the next few years to be difficult ones for American Jews.