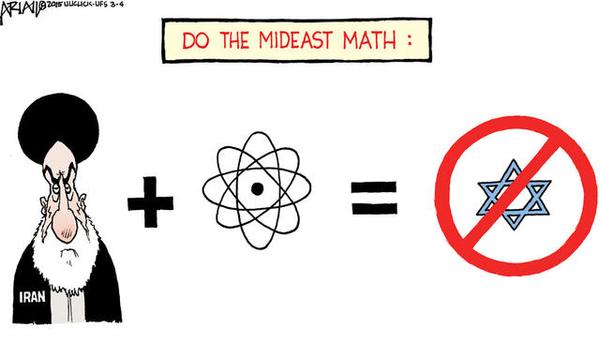 The deadline for the Iranian nuclear negotiations is almost at hand, and the proposed deal appears to be even worse than expected. Number of centrifuges, decommissioning of Fordow, previous work on military applications — the Obama administration’s negotiators have backed down on issue after issue. The one thing that seems to be certain is that sanctions will be removed, sooner rather than later.

President Obama has said that he would rather see no deal than a bad deal, but the behavior of his negotiators is making a liar out of him. In fact, an Iranian press aide who defected to the West while covering the talks in Switzerland said that “the US negotiating team are mainly there to speak on Iran’s behalf with other members of the 5+1 countries and convince them of a deal.”

Administration policy toward Iran is hard to understand. On Obama’s watch, Iran has consolidated its control over Syria and Lebanon, and is moving toward adding Iraq to a new Persian Empire. Its Houthi proxies are close to securing control of the critical Bab el Mandeb strait, a choke point between the Suez Canal and the Indian Ocean. But Obama and company have gone out of their way to not upset Iran’s plans, going easy on the nuclear issue, backing down after Iranian client Bashar al Assad used chemical weapons, and now even providing air support to Shiite militias in Iraq.

Obama has no problem, on the other hand, with being tough on Israel. After trying and failing to bring about regime change in the Jewish state (he didn’t try in Iran in 2009), he embarked on a contempt campaign aimed at PM Netanyahu, as well as announcing a “reassessment of relations” that may include US votes for anti-Israel resolutions at the Security Council.

But there is a method in administration madness. It all goes back to the Iraq war (remember that)?

The US removed Saddam from power (and ultimately allowed the new Iraqi government to remove him from this world), but it also destroyed the conservative Sunni Baathist army and political structure. Radical Sunnis and various Shiite militias tried to fill the vacuum, fighting each other and US troops. Life in Iraq devolved into chaos with sectarian executions and mass-murder car bombings occurring daily. US troops suffered numerous casualties from IEDs, many provided by Iran via Syria. Iran supported the Shiite militias, but also aided the Sunni insurgents in their operations against US troops.

On this background, the Iraq Study Group, led by James A. (“F— the Jews”) Baker and Lee Hamilton, submitted its report to the Bush Administration in December, 2006. It made numerous recommendations, including what it called a “new diplomatic offensive” to  stabilize Iraq. The report recommended creation of a “support group” of Iraq’s neighbors — including Iran and Syria — and other “important countries” (not Israel, of course) that would work together to support the integrity of Iraq, reduce the violence, improve the economy, etc. A stable, unified, sovereign Iraq is in Iran’s interest, the writers suggest, and Iran can be persuaded to help bring it about. [p. 53]

The report does mention the connection between Iran and some of the Shiite militias. But nowhere in its 142 pages does it consider the danger of a huge change in the balance of power in the region as a result of an Iranian conquest of Iraq, the traditional countervailing power against Iranian ambitions. The closest it comes is when it warns that “the regional influence of Iran could rise at a time when that country is on a path to producing nuclear weapons,” [p. 33-4] and when it notes that Egypt, Saudi Arabia and Israel worry about “aggrandized regional influence by Iran,” and might act to prevent it. [p. 48] Indeed they might — the Arabs are doing exactly that in Yemen today.

This is the fundamental flaw in the report: it ignores the fact that since 1979 the overriding objective of Iranian policy, the driver of the regime’s nuclear program, its export of terrorism, and its subversion of its neighbors has been its desire to become the regional hegemon, to establish a Shiite caliphate that will dominate the region from Iran’s eastern border to the Mediterranean. An integral part of the plan is to control, even annex, Iraq. A bit more than “aggrandized regional influence,” I think.

Such an Iran would not be interested in stabilizing Iraq as a sovereign state. But Baker and Hamilton didn’t notice, or pretended not to.

The other thing they did — I wrote about this in my very first blog post back then — was to assert the “linkage theory” [that all the problems in the Middle East depend on the Israel-Palestinian conflict] in a big way. “The United States will not be able to achieve its goals in the Middle East unless the United States deals directly with the Arab-Israeli conflict,” [p. 54] they announce, without any proof or even argument. And naturally the solution is to have Israel give Syria back the Golan Heights and withdraw from Judea and Samaria to create a Palestinian state. Baker and Hamilton believed that a grateful Syria would then stop its mischief in Iraq.

But it isn’t dumb enough to think that Iran wants to help stabilize Iraq and Syria, after which it will go back to minding its own business. The administration understands that the Iranians want the whole enchilada. And they are OK with that. After all, who is to say that a Shiite caliphate is worse than the Islamic State, or the Wahhabi regime of the Saudis? All those Arabs are crap, they think, so who cares what kind of dictatorship they have. We can work with Iran, they think. One address for the whole Middle East. Pax Persarum.

Unfortunately, Israel stands in the way of the Iranian dream. And it might be small, but it’s still a nuclear power. It’s a much bigger threat to the Shiite caliphate than the Saudis or anyone else. So Israel has to go, and the best way to bring that about without a nuclear war is to weaken it, until the conventional forces of Hizballah, Hamas and the PLO combined with boycotts and isolation from the Western world can make it so unpleasant to live here that it will collapse.

For me that would be a big problem. For Obama, not so much.