To my friends in Fresno 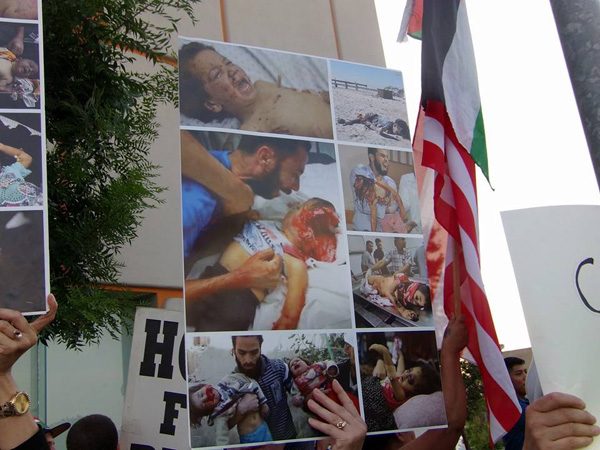 Pictures of wounded children displayed at anti-Israel (not ‘pro-Gaza’) rally in Fresno, 8/8/2014

Although I have been happily living in the one and only Jewish state for a week, I still haven’t let go of my old home town, Fresno California.

Here is a statement from an email sent to its members by Peace Fresno, a local organization dedicated to “social justice and peaceful resolution of conflict”:

Since July 8, 2014, Israel had [sic] launched an intense and disproportionate bombing campaign and land incursion of the Gaza Strip, “Operation Protective Edge”.

In Gaza, 1.7 million Palestinians live in what is often referred to as an “open-air prison.” All of Gaza’s borders are restricted, including the side bordering the Mediterranean Sea, which is controlled by Israel. Israel has imposed an eight-year blockade on Gaza, making it extremely difficult and even impossible for Palestinians to go in and out of the Gaza Strip. Access to water, electricity, and basic goods have also been extremely limited.

Thousands of Palestinians have been left displaced and homeless due to of the damage to their homes from Israeli airstrikes. Electrical damage from the attacks has further crippled already inconsistent access to electricity in Gaza.

Palestinians have lived under 47 years of Israeli military occupation, and 66 years of ongoing colonization, dispossession, and apartheid.

I won’t dwell on the ironies (Gaza’s electrical power was cut off when rockets fired by Hamas at Israel hit power lines and Israel Electric Company workers fixed them under fire) or the misuse of language (‘disproportionate‘), or the simple falsehoods (occupation of Gaza ended in 2005; the blockade stops war materials, not food and medicine). I won’t discuss the fact that casualty reports are massively exaggerated, both in number and the percentage of noncombatants. I’ll leave for another time the vicious lie that there is any sense in which Israel practices apartheid, or the one that IDF soldiers deliberately shoot at children.

I’ll just note a few things that are left out:

Hamas is left out, the internationally-recognized terrorist gang that rules Gaza, whose founding document can be summarized as “kill the Jews and destroy Israel.” The massive rocket barrage that precipitated the war, that would have killed countless Israelis were it not for the advanced missile defense system deployed at great cost and the bomb shelters built (also at not-inconsiderable cost) in all new construction, is left out. The tunnels from Gaza into Israel which open out between the kibbutzim near Gaza and through which hundreds of Hamas terrorists could have emerged to carry out mass-casualty attacks, are left out.

This isn’t just an ideological problem. I understand that it is an article of faith for the Left to insist that Israel is at fault for the conflict with the Palestinians. I understand that they get their idea of history from pseudo-historians like Ilan Pappé, and their knowledge of current events from pseudo-news providers like KPFA.

Unfortunately — maybe because we are so outnumbered and outspent, because our enemies received guidance from the world champions of thought control, the soviet KGB, and because of the reservoir of Jew-hatred in Christian and Muslim cultures — we lost (and continue to lose) key battles in the information war that seems to be more important than the physical struggle against the terrorist factions that we are fighting today.

But you are intelligent beings with free will. The truth is out there. Think about seeking it instead of being mindless automatons with slogans instead of ideas.

This entry was posted in Information war. Bookmark the permalink.

4 Responses to To my friends in Fresno