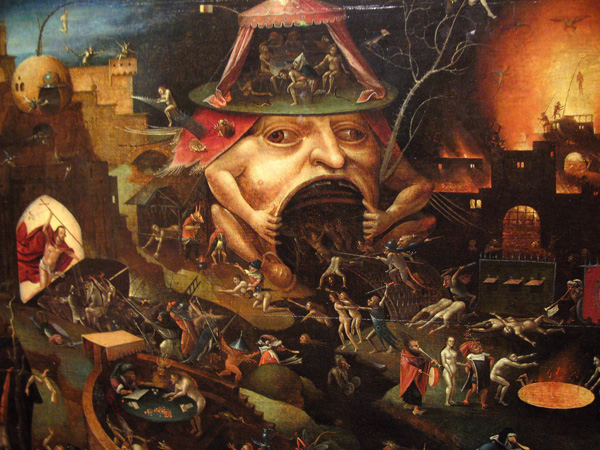 “A Violent Forcing of the Frog” by Hieronymus Bosch

Is evil something concrete, or is it just the absence of good? Does it make sense in any way to say that the devil exists?

It seems to me that the answers to these questions are not reassuring. The actions of the “Islamic State,” or whatever name the Islamic horde that is murdering and raping its way through Iraq as you read this calls itself, make me think that (to use an expression favored by the similar savages of Hamas) the gates of Hell have opened.

I think of the paintings of Hieronymus Bosch when I see the unspeakably horrible photographs and videos from Iraq and Syria. I won’t reprint them in my blog, but you can find them easily.

It’s simple: Christians can convert, leave or die. The Yazidi sect, who are considered “devil worshipers” by the IS, seem to have fewer choices. Shiites do poorly as well.

As has ever been the case with messy third-world genocides, the West wrings its hands to some extent, but does nothing. There are huge “anti-genocide” demonstrations in Europe and many cities in North America, but they are all about Gaza, in support of Hamas, which would emulate the IS if only it had the ability to do so.

By the way, there are three times as many Palestinian Arabs today than in 1970. Some genocide.

Who can deny that so many humans, especially young males, have a compulsion to destroy, to wreck, to kill? Civilization tries to sublimate this desire into productive activity, or at least use it for defensive military purposes. Failing that, violent individuals are incarcerated or otherwise prevented from living out their desire. The uncivilized leaders of the Islamic State use this violence as a weapon to sow fear and prepare the way for their advance. Maybe they also enjoy the international ‘respect’ that their brutality gets them.

Much of the Middle East will soon be homogeneously Muslim. Countries that haven’t had any Jews since 1950 soon won’t have any Christians either. Israel is one of the few places in the region where Christians can live safely today.

Extreme violence is not the only ugly human proclivity that we could do without. Another is the stupidity that it seems to engender in its intended victims, especially those from more developed cultures which are physically capable of fighting back. So the Europeans busy themselves excoriating Israel for killing a few hundred Gazan Arabs while trying to defend itself against the IS-type massacre that Hamas would perpetrate with its rockets and tunnels, while the armies of the Prophet (metaphorically and actually) advance inexorably toward their own heartlands.

Nothing would make them happier than seeing the Jews suffer. Who do they think they are, to enjoy a good economy and a high birthrate, indeed to be among the happiest people on earth? Don’t they understand that they are Jews, who deserve to be expelled from the countries where they live by sufferance, have their property stolen, and perhaps be exterminated? No, they don’t — except for the Israeli Left, which agrees with the Europeans.

It could be too late for Europe now, which may not be able to overcome the demographic pressure from its rapidly growing Muslim population. Its embrace of Jew-hatred is the last twitch of a mortally wounded beast. The US is withdrawing from the struggle, at least unless a major terror attack brings it back (although the response could be the opposite, given the leadership vacuum there), so there will be little or no help from across the Atlantic.

Israel is holding its own, despite the pressure on its borders and the lack of support from abroad. It’s possible that it will end up the last outpost of civilization in Europe and the Mideast. Wouldn’t that be ironic?

This entry was posted in Islam. Bookmark the permalink.

1 Response to The civilized world contracts