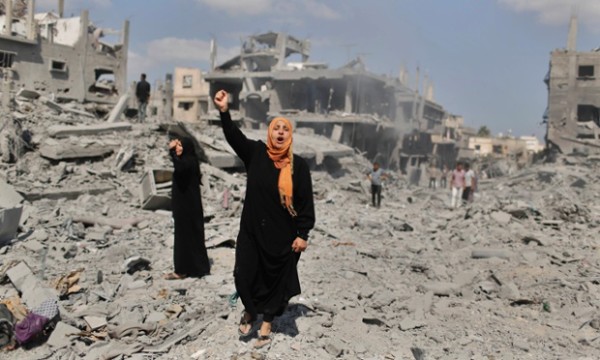 Sometimes one hears that the Hamas strategy is difficult to understand, appears irrational, is self-defeating, and so forth. After all, they are not going to destroy Israel with their rockets, and every time there the conflict heats up they end up with a huge amount of physical damage to Gaza. But I think the strategy is not so complicated and makes sense.

In order to understand it, there are a few basic premises that we need to accept:

1. The top priority is removing the Jewish presence from ‘Muslim land’ from the river to the sea. Insofar as this goal remains far away, a secondary goal is recovering honor by killing Jews. All other objectives are far below these in importance. The well-being of Gaza residents doesn’t move the needle when compared with these.

2. Hamas acts as though it believes that there are three dimensions to its war with Israel: the kinetic war (rockets, tunnels, terrorism), the psychological struggle against Israel, and the information war aimed at the West. It believes Israelis are spiritually weak and can be demoralized, and it believes that the West can be persuaded to restrain Israel to the point that the advantage created by its high-tech weapons and firepower can be neutralized.

The theme that Israel is spiritually weak has appeared numerous times in statements by Hamas leaders and others, who wrongly interpret diversity of expression as collective lack of resolve. The idea is that if life in Israel can be made risky enough, if normal life can be disrupted, then Israelis will flee (my guess: a few might, most won’t).

3. Time is not a factor. It took hundreds of years to drive the Crusaders out.

Given the premises above, Hamas’ behavior makes total sense.

1. Continuous pressure is applied via rockets and other forms of terrorism. This is intended both to demoralize Israelis and to kill Jews, an important factor in maintaining Palestinian support (surveys show that the most important determinant of political attractiveness in the Palestinian community is the degree of militancy and prowess in killing Jews shown by a candidate or party).

2. Periodic conflagrations serve to send the message to Israelis that they will never have peace, test their readiness, and — most important — provide an opportunity to stoke anti-Israel emotions abroad.

An all-out effort is made to present context-free images of Israel’s ‘atrocities’, including fake and exaggerated ones. The established propaganda networks of the worldwide Left are especially enthusiastic, but even the mildly liberal mainstream media has a strong bias to believe almost any accusation against the IDF or Israel. Fact-checking in an environment controlled by Hamas is extremely difficult, and in many cases initial reporting and photography is provided by Palestinian personnel who, if not sympathetic to Hamas, are at least anti-Israel.

This propaganda finds fertile ground in places where there is a strong current of Jew-hatred (like Europe). It also provides excuses for officials (like President Obama) who for geopolitical reasons want to restrain Israel.

The result is that Israel has to expend more and more resources in protecting itself against accusations of war crimes, and can fight much less effectively against Hamas, whose operations are precisely tailored for this situation. Little by little, Israel’s freedom to respond is circumscribed. Ultimately, the West (the US) steps in and stops the fighting, especially if it appears that Israel is about to gain a real advantage.

Arab losses in these conflicts are relatively small, a few hundred fighters that can easily be replaced. Because much of the military infrastructure of Hamas is deeply embedded in heavily-populated areas, destruction of weapons and supplies is much less than it may appear. Civilian casualties are considered a small price to pay for their utility as raw material for highly effective atrocity propaganda.

The large-scale destruction of buildings, etc., provides a reason for Hamas to demand concessions on importing materials which can (and will) be used to improve its military capability. The “rebuilding of Gaza” becomes a major cause that can be supported by the UN and NGOs. Although it will be sold as rebuilding for civilian purposes, a large proportion of aid will be diverted for military use.

This is especially important now, when the loss of Egyptian and Syrian support has cut Hamas off from much of its funding.

This cycle of alternating attrition by terrorism and military conflict will continue, think Hamas planners, until Israel is defeated (possibly, but not necessarily, in a larger regional conflict). Periodic negotiations serve to legitimize Hamas in the eyes of the world, and to force incremental concessions from Israel.

Israel’s counter-strategy must be to break the cycle, either by removing Hamas from power or by effectively disarming it. Experience (Lebanon) has shown that disarmament — and making it stick — is not easy, because there are no international mechanisms that can be trusted.

This entry was posted in Information war, Terrorism, War. Bookmark the permalink.