A fable for dumb American negotiators 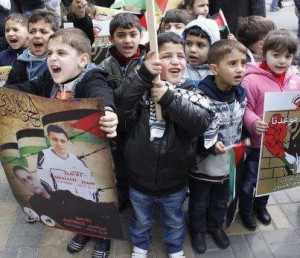 Suppose two men living in the same house are in love with the same woman, the wife of one of them. The other can think of nothing else, and even has come to believe an elaborate fantasy of how she was originally his wife, and the first man stole her away. He has tried several times to murder his rival, without success. He would cut his throat in a moment if he could. He is not only greatly frustrated because he doesn’t have what he desires, but the situation makes him feel less a man, which drives him insane with rage. He wants the woman, he wants revenge, and he wants to obtain them in a way that will demonstrate that he is a man.

The woman, of course, is eretz yisrael and you know who the men are.

You can’t solve a problem like this with compromise or technical solutions, because the problem is not in the objective situation, it is in the mental condition — face it, the insanity — of one of the men.

So one doesn’t know whether to laugh or cry when one reads this statement, attributed to US negotiator and former Ambassador to Israel Martin Indyk:

We couldn’t understand why [recognizing Israel as a Jewish state] bothered [Abbas] so much. For us, the Americans, the Jewish identity of Israel is obvious. We wanted to believe that for the Palestinians this was a tactical move – they wanted to get something (in return) and that’s why they were saying ‘no.’

“The more Israel hardened its demands, the more the Palestinian refusal deepened. Israel made this into a huge deal – a position that wouldn’t change under any circumstances. The Palestinians came to the conclusion that Israel was pulling a nasty trick on them. They suspected there was an effort to get from them approval of the Zionist narrative.

The Palestinian Arabs belong to a pathological culture, an insane culture, which is not amenable to compromise or to technical solutions like the ones the Americans were selling. For example (this is random, I could find countless other stories like this one):

PA and Hamas honor
Sbarro pizza shop suicide bomber
who murdered 15
Hamas: He “gave the Zionists a taste of humiliation”
PA: Funeral was “national wedding” – the Martyr’s wedding to 72 Virgins in Paradise

They weren’t born like this. A culture goes insane when it is fed a steady diet of cultural poison, and that is what happened to the Palestinian Arabs — a deliberate process, using the traditional honor/shame aspects of the Arab culture to make it into a weapon.

This isn’t a weapon that can be defeated by diplomacy or limited warfare designed to make the leadership pay a price. The only way to end the conflict is to end the culture — or find a way to distance it from ourselves. To get it out of our house.

1 Response to A fable for dumb American negotiators