How many times must Jews be expelled? 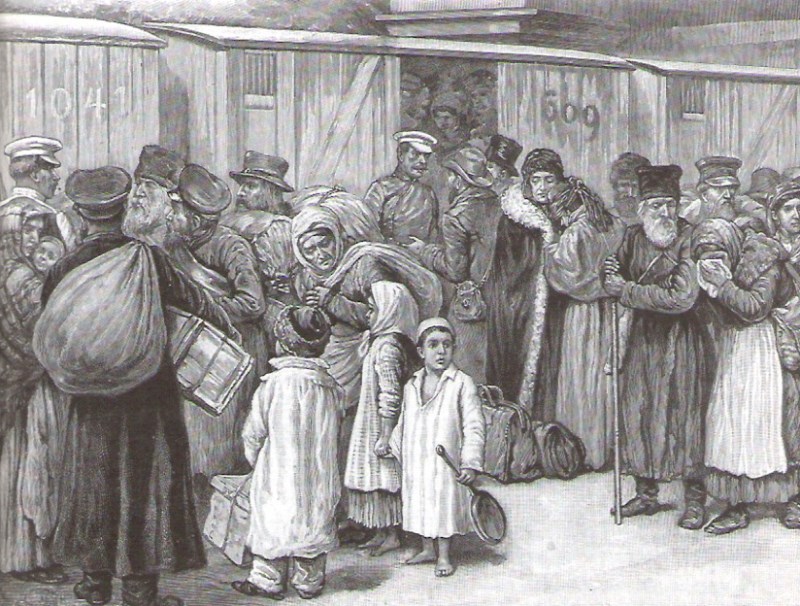 “Expulsion of Jews of St. Petersburg: Scene at Baltic Railway Station.” Engraving by D. Naumann after a sketch by B. Baruch, n.d. (Moldovan Family Collection)

Then a new king, to whom Joseph meant nothing, came to power in Egypt. “Look,” he said to his people, “the Israelites have become far too numerous for us. Come, we must deal shrewdly with them or they will become even more numerous and, if war breaks out, will join our enemies, fight against us and leave the country.” — Exodus 1:8-10

The Jewish people have been expelled from their homes over and over. Egypt, Judea, England, Spain, Portugal, Hevron, Nazi-occupied Europe, Jordanian-occupied Jerusalem, Judea (again) and Samaria, the rest of the Arab and Muslim world, Yamit, Gush Katif, etc.

How many did I leave out? Who knows? It would take more research than I have time for on a Friday morning.

Unnamed American officials told Nahum Barnea that they had developed a map “using advanced software” in which 20% of the ‘settlers’ (about 125,000 Jews) would be required to ‘evacuate’ Judea, Samaria and Jerusalem.

A result would be that Israel would be unable to defend herself against terrorism from the new PLO/Hamas entity, or invasion from the East. No, I don’t think US guarantees would be worth the papyrus they are inscribed on.

It is interesting that the solution to the Israeli-Arab conflict is always presented as requiring the transfer of Jews. You would think that it would be the aggressors who would pay the price for ‘peace’, but that isn’t how the world sees it.

A deportation of this magnitude would crush Israeli society. Even apart from the security consequences the damage would be incalculable.

The “international community,” which is only capable of making speeches while hundreds of thousands are killed in Syria, which has responded with celebrities holding up signs to the kidnap and proposed sale of several hundred girls in Nigeria, has decided that the Israelites are too numerous yet again. This time, though, the whole world is Egypt and the Jewish people have no place to go.

This “community,”  the new Pharaoh, has decreed another expulsion of Jews, in the name of the “human rights” of the ideological brothers of the slave-takers of Nigeria.

In truth, they don’t care about the pathological “Palestinian” culture in whose name they are trying to drive the Jews out of their ancient homeland. And the geopolitical pressures — the need to appease the sources of Arab oil — are much weaker than they were in 1973, when the policy to reverse the outcome of the Six Days war became cast in stone at the US State Department.

But  the Israelites have grown too numerous, and the new Pharaoh is unhappy. This time the Jewish people must take a stand, a stand based on its historic rights, its rights in international law, and its self respect.

How many times must Jews be expelled from their homes?

This entry was posted in 'Peace' Process. Bookmark the permalink.