Posted on November 22, 2020 by Victor Rosenthal 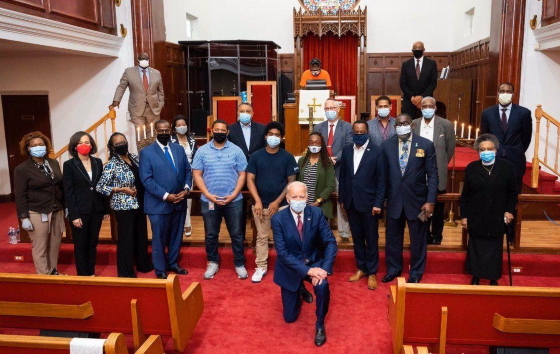 Here we see Mr. Biden kneeling. The photo was taken on 1 June 2020 at the Bethel AME Church in Wilmington, Delaware, about a week after the death of George Floyd focused attention on the treatment of black Americans by police, and triggered massive demonstrations and riots across the country.

Biden didn’t explain the precise meaning of the gesture. One can assume that if he were asked, he would say that it was a statement of identification with victims of police brutality and of his intent (as he indicated in a speech the Friday before) to “root out systemic racism,” which he implied was “[t]he original sin of this country [that] still stains our nation today.”

“Taking the knee” was popularized by former San Francisco 49ers quarterback Colin Kaepernick, who began to kneel during the playing of the National Anthem at the beginning of the 2016 season, because, he said, “I’m not going to stand up to show pride in a flag for a country that oppresses black people and people of color.”

Gestures, like texts, may have various levels of meaning. The above are the most obvious interpretations of Biden’s and Kaepernick’s gestures. And in my opinion, it is appalling that an American president would take such positions.

Not that there isn’t unnecessary police violence and injustice perpetrated against blacks in America. That should go without saying, and it should also go without saying that it is essential to repair what Biden referred to as an “open wound” in American society (although there is great disagreement about who or what ripped the wound into its flesh). But the position that the country is “systemically” flawed as a result of an “original sin” is an obnoxious one for a president to take.

If the problem is systemic, that means that it is built into the very fabric of society; it isn’t caused by a few bad apples in the barrel, but by the whole idea of a barrel. “Original sin” is a sin that everyone commits simply by being born; its use here implies that white Americans are racists, simply because they are white. There is nothing they can do about as long as the society remains as it is. The society has to be ripped apart or turned upside down to fix it.

In other words, only a revolutionary solution can fix a systemic problem. And history tells us that revolutions are invariably bloody, and the ones who come out on top afterwards are not the most just and deserving, but rather the most ruthless and brutal. Biden claims that he wants to be a healer and to bring normalcy to American life, but the way to do that is the opposite of embracing revolution. Of course Biden didn’t write that speech himself, and he isn’t a deep thinker. But those were the words that came from his mouth.

That is one implication of the gesture. It’s bad enough. But look at the photo again. Colin Kaepernick kneeled to show disrespect; you are supposed to stand for the national anthem. What Kaepernick did was a form of aggression, and many people strongly objected. But kneeling can also be a submissive posture. You kneel before a king or other noble, or God. When a white person “takes the knee,” he is in a submissive mode, as if taking on the burden of his guilt. Even if he believes that he doesn’t personally oppress anyone, he abases himself because of his inherent sinfulness and therefore his overwhelming feeling of guilt as a white person who benefits from the systemic racism of society.

Guilt for “white privilege” is fundamental to so-called “Critical Race Theory,” a postmodernist ideology that applies concepts like the primacy of identity and narrative over objective reality and truth to the discussion of race. “Whites” do not have a part in the discussion, except to be silent and scourge themselves by agreeing to reparations and preferential treatment for “people of color.” Liberal concepts like meritocracy and equality of opportunity that were the basis of the American Civil Rights movement and the ideas of Dr. Martin Luther King Jr. go out the window in favor of a revolutionary change in the color of the power structure in America.

Needless to say, if normalcy, moderation, and healing are your goals, this isn’t the way to attain them. And yet, this is the message that Mr. Biden sent, albeit without thinking about it.

Dr. King stood for liberalism. Critical race theorists propose a form of irrational authoritarianism that, in connection with modern technology, could transform the US into a totalitarian state the likes of which has never been seen – or alternatively, could bring about its disintegration in civil war.

Most Democrats are liberals, and they thought they were voting for a liberal administration. I hope they get one.

This entry was posted in American politics, American society, Wokeness. Bookmark the permalink.

3 Responses to Taking the Knee