Drama (not so much) and Democracy

Posted on September 12, 2019 by Victor Rosenthal

PM Netanyahu promised a dramatic announcement Tuesday night. It was about as dramatic as he could have made it, given that he is a caretaker PM who does not have a coalition, and that it is one week before the election. I brought my dinner into the living room to eat while watching him on the TV. It was probably unnecessary. There is very little that he could actually do at this point, no matter how much he wanted to.

Netanyahu noted that the long-awaited Trump plan would be released shortly after the election, and that this was a historic opportunity to take action that – thanks to his close relationship with President Trump – would receive the sanction of the US. He promised that if elected he would apply sovereignty (ribonut) to all Israeli communities in Judea and Samaria as soon as Trump’s plan was released. He promised that immediately after the election, without waiting for the American plan, he would apply Israeli sovereignty to the Jordan Valley and the northern Dead Sea area. He displayed a detailed map of the area that would be included. This would finally establish, he said, the eastern border of the State of Israel, and would ensure that Judea and Samaria would not become a terrorist stronghold like Gaza. 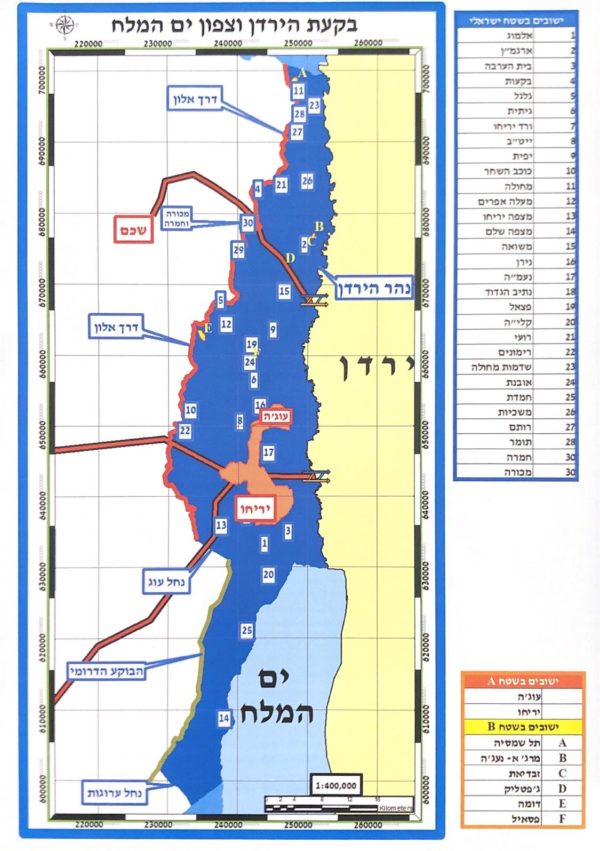 On the right you can see a list of the Jewish communities that would be included. There are also several Arab towns that will remain under PA control, including Jericho (the orange area in the center).

Netanyahu mentioned that the presence of the IDF in all of the Jordan Valley is absolutely essential for the defense of the country. He is not the first to have said this. In fact, his words “the entire Jordan Valley, in the broadest meaning of the term” echo a similar statement by Yitzhak Rabin in his last speech to the Knesset before he was murdered.

Although the Left likes to present Rabin as the martyred champion of its policy of withdrawal, Rabin was extremely suspicious of the Oslo accords that he was unable to avoid signing, and envisioned a final agreement that would create a Palestinian entity that was less than a sovereign state, and which occupied less than the entire area of Judea and Samaria. In particular, he wanted to keep the Jordan valley. A glance at a relief map of Israel – I have one on my wall – shows why: 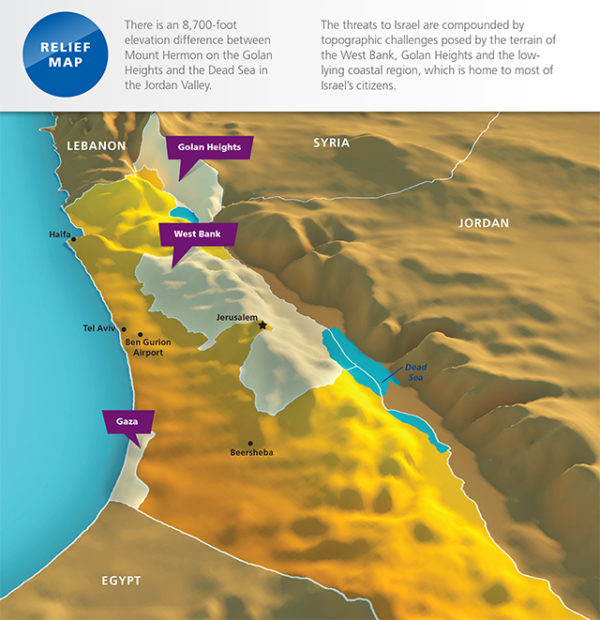 The heights here are exaggerated, but the difference in elevation between the valley floor and the mountains surrounding it is between 1000-2000 meters. The importance of Netanyahu’s and Rabin’s stress on the “broadest meaning of the term” is that it includes both the valley floor and the rising western slope. Any attack on Israel from the east would have to cross this formidable natural barrier; and if an enemy were able to dominate the western ridge, the heavily populated areas of the country would be at its mercy. The topography is similar to that of the Golan Heights, but the Jordan Valley is even more critical strategically.

Netanyahu mentioned the US President and his close relationship with him at least five times (I stopped counting), and while this is apparently good politics in Israel where most people – both on the Right and the Left – are in awe of the power of the US, it has several worrying aspects. For one thing, the transformation of Israel into a partisan issue that was encouraged by the Obama Administration has become even more apparent as it is fed by the polarized domestic American politics surrounding Trump. The more Netanyahu associates himself with Trump, the more Trump’s enemies become our enemies. And when they ultimately gain power, they will attempt to reverse Trump’s policies, including – especially – his pro-Israel ones. In May, Bernie Sanders even indicated that he would consider moving the American Embassy back to Tel Aviv “if it would help bring peace” (he seems to have since backtracked).

Another concern is that Netanyahu seems to be building on an assumption of continued administration support. There is a degree of instability in US policy, as is indicated by the surprise departures of Trump’s special envoy Jason D. Greenblatt, who was to be the key negotiator of the “deal of the century,” and National Security Advisor John Bolton. Bolton was more hawkish on such North Korea, Iran, and Afghanistan than Trump, and while as of this writing we don’t know what particular disagreement prompted Trump to fire him, it could be related to the rumors that Trump will meet with Iranian President Rouhani. While no US President has been as consistently pro-Israel as Trump, there is no guarantee that this will continue.

Although it is an election promise, nevertheless the statement that he will bring about the extension of sovereignty to all the communities in Judea and Samaria is a significant one. Critics on the right point out that he did not promise to apply sovereignty to the land as he did to the Golan Heights and as he intends to do to the Jordan Valley, but only to the communities. This is an interesting application of the concept of sovereignty, which may have important consequences.

Next Tuesday’s election is too close to call at this point. There are, like last time, parties that are flirting with the 3.25% threshold of votes needed to enter the Knesset; like last time, Netanyahu’s Likud and its center-left opposition are running neck and neck; and also like last time, Avigdor Lieberman will hold the balance of power in coalition negotiations.

One thing that is clear, however, is this: one failed round of coalition negotiations and rerun of the election in a year is all the Israeli people will stand for. Either they will come up with a government this time, or the people will rise in revolt (and I will join them). There is a huge amount of frustration that has built up against politicians who seem to be unable to deal with the rising cost of living – especially housing – the endless drip of terrorism, the arson balloons and rockets from Gaza, the continued presence of African migrants in Tel Aviv, questions of religion and state, army service for Haredim, and countless other issues. It doesn’t help that many Knesset members, who are well paid, are accused of or even already indicted for corruption (one of Netanyahu’s opponents accused him of trying to create a “government of suspects,” a memshelet chashudim).

I’m still not entirely sure whom I will vote for, although I am leaning toward Yamina, the right-wing coalition led by Ayelet Shaked. I don’t like to decide things earlier than necessary. I never know what might happen to change my mind. So I won’t be certain until I am standing there and reaching for that little slip of paper, the great instrument of democracy.

3 Responses to Drama (not so much) and Democracy