A Unity Government, Without Arabs and Without Haredim

Posted on September 22, 2019 by Victor Rosenthal

The study of Torah is good in combination with an occupation, since the toil of both makes sin forgotten. All Torah that is not combined with work will eventually cease and lead to sin. — Rabban Gamliel, son of Rabbi Yehuda Hanasi (Babylonian Talmud, Avot 2:2)

Without Herut and Without Maki – David Ben Gurion*

I like reading about Jewish history and especially the modern history of the State of Israel. One thing I learned about were the almost incomprehensible sacrifices made by some people in order to get here, to create an actual Jewish state in our homeland after millennia of often oppressive exile, and to defend it in essentially a 71-year long war. Maybe longer. The land is soaked in our blood, the blood of Jewish people.

The world is full of Jew-haters. It seems that it has always been so, since the day we left Egypt. When they didn’t hate us, they tolerated us as second-class humans. Sometimes not even as humans.

In most places, they got what they always said they wanted. Much of the world is now Jew-free. Hitler and Stalin eliminated the Jews of Europe, and the Muslim world vomited them out in response to the “insult” of the re-establishment of our state. The Jewish state has become the center of the Jewish universe, in one human lifetime. The conditions that allowed the Jewish people to survive as a people in diaspora are now gone. If the Jewish state does not continue to exist, neither will the Jewish people.

Unfortunately, the State of Israel is in serious danger now. And not just from the Iranian regime and the Palestinian Arabs (although these are serious threats too).

In an article published a few weeks ago demographer Dan Ben-David notes that the academic accomplishments of Israeli children are among the worst in the developed world. Without a well-educated population, we will not be able to maintain our first-world economy, or for that matter, our first-world military. This is in part because of the combination of the lack of a core curriculum including “secular” subjects like mathematics and English in Haredi schools, and an astronomical Haredi birthrate of “7.1 children, in contrast to 4.0 among [non-Haredi] religious Jews, 3.4 among Muslim Arab-Israelis and 2.2 among secular Jews.”

Here is a graph that projects the likely size of these groups in 2065: 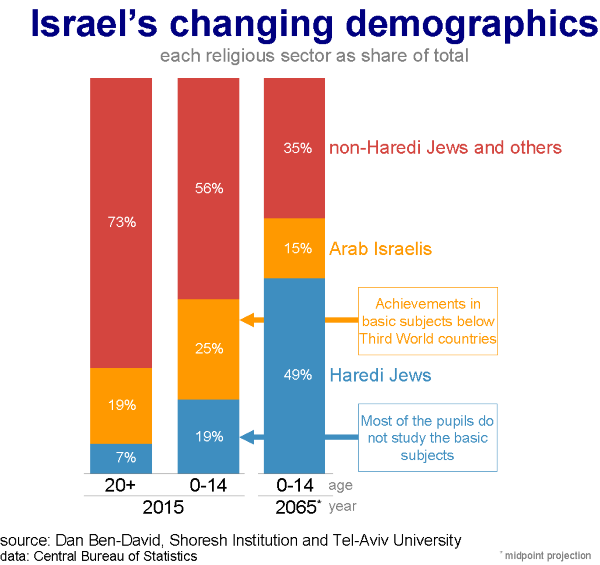 It is reassuring to know that Meir Kahane’s prediction that the Arabs would out-reproduce us  will not be fulfilled, but the explosive growth of a Haredi population that is not prepared to contribute to a modern technology and information based economy is unsustainable. In 2014 only 13% of Haredi 12th grade boys took matriculation exams required for admission to universities, compared to 78% of non-Haredi boys (figures for girls are higher, 32% vs. 87%). Although entrance requirements to universities are often waived for them, there is a high dropout rate. In 2014 only 2.4% of Haredi men and 8.3% of Haredi women aged 25-35 held academic degrees, compared to 28% and 45% respectively in the non-Haredi population.

“High-tech” is only a solution for those who can read documentation in English and do mathematics. Gemara may or may not have spiritual value, but it isn’t helpful in microprocessor design, for example.

Although non-Haredim are angered by the refusal of the Haredi parties to agree to allow a reasonable percentage of their youth to do military service (or other national service), the worse problem is that they are not suited for it, or for many other kinds of employment – intellectually, physically, or temperamentally.

This is a politically-caused problem. The laws that would require secular subjects to be taught in any school that receives government funding either don’t exist, have no teeth, or are not enforced. The government supports the yeshivot in which young men study Torah, and liberal welfare benefits make it possible for underemployed families (supported primarily by women, who mostly work in education or child care in their communities for low salaries) to grow unaffected by economic constraints.

The fact that almost every Israeli government since the first has included the Haredi parties, with them often holding the balance of power, means that little is done to change the situation.

I am not anti-religion and I am not anti-Haredi. But the existence of a large class of Jews whose only occupation is study has never before existed in Jewish history. Perhaps there are 100 or even 1000 Torah scholars so important that they should be supported by the state – but tens or hundreds of thousands?

I am aware that the Left uses these facts as ammunition against the Right, which most recently has been depending on support from the Haredi parties to form its coalitions. But nevertheless they are facts, and we have to face the truth that the Right, for which I vote, has been irresponsible, caving in to the exaggerated demands of the Haredim.

It seems to me that war with Iran and/or its proxies is inevitable, and analysts agree that this will be one of Israel’s most difficult wars, both for the IDF and for the home front, which will be exposed to the huge missile arsenals accumulated by Hamas and especially Hezbollah. At this moment, tension is especially high, and it seems clear that we need a strong national unity government capable of both managing the war to come and bringing together the population.

Unfortunately, Benny Gantz is a mediocrity with a mediocre record who should not be Prime Minister, and his associates are worse. Binyamin Netanyahu is under a legal cloud and will probably be indicted. Despite his brilliance, Netanyahu seems to only be able to function as a dictator, one who believes that he is both omnipotent and immortal, and doesn’t need to delegate authority or allow for a successor.

As I write, the anti-Zionist Arab parties are considering recommending Gantz to the President to form the government. They haven’t recommended a Zionist party since 1992, when they recommended Rabin’s Labor Party. If they do, they will have received some significant promises in return. If Gantz were to make a deal with them, it would be something less than treasonous, but still a betrayal.

The best practical solution seems to be a unity government without Arabs (or acquiescence to their demands) and without Haredim, with the Likud led by someone other than Netanyahu. And yes, there would have to be a rotation of the PM job between Likud and Blue and White.

Is such a thing possible? I don’t know. Certainly today it looks unlikely.

But one thing is certain: there will not be another election. Only politicians and ad agencies like elections, and the people have had enough. We need a government, and we need it now – before we are at war.

This entry was posted in Israeli Arabs, Israeli Politics, The Jewish people, War. Bookmark the permalink.

2 Responses to A Unity Government, Without Arabs and Without Haredim