Getting back to (strategic) basics 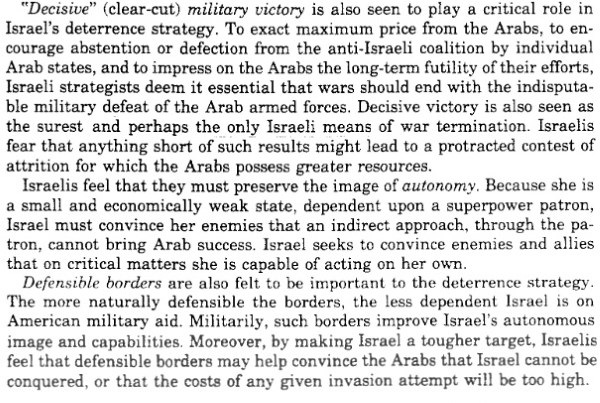 — From a 1981 RAND Corporation report on “Israel’s Strategic doctrine.”

The authors explain that this doctrine was developed because of Israel’s small size and lack of strategic depth, her small population compared to her probable adversaries, her economic weakness and her vulnerability to superpower intervention.

With the exception of an improved economy, these factors have changed little since 1981. Israel still has to depend on a small standing army and the ability to quickly mobilize reserves in the event of war. It is still possible for a fighter jet or missile to traverse the country in a few minutes. And Israel still has to contend with interventions by external powers who, it seems, would rather see conflicts continue forever than a decisive Israeli victory. Whatever its cause, the passionate interest of the rest of the world in what happens in this little sliver of the Middle East does not tend to work in our favor.

Certain things have changed since this report came out. Our enemies have moved to reliance on proxies rather than direct nation-to-nation warfare, and they have developed these proxies from low-capability terrorist militias to real military threats. Their missile forces have been greatly augmented to compensate for their inability to challenge our air force. Terrorism has become part of a coordinated strategy, and not just disconnected actions by various groups. Our enemies have increased their use of psychological/cognitive warfare, which focuses both on the Israeli public and on the external powers. They have massively increased the amount of money used to finance subversion inside Israel by NGOs that work to damage military and civilian morale, tie the leadership up in legal issues, and generally disrupt the functioning of the state and its response to threats. At the same time, the delegitimization of Israel abroad makes it less likely that we will be able to stave off outside intervention and maintain our sources of supply in the event of war.

The three legs of the traditional doctrine – decisive victory, autonomy, defensible borders – are still, in my opinion, appropriate for Israel’s situation, even though the nature of our enemies has changed. Israel has even less strategic depth than it did in 1981, thanks to the return of the Sinai, the withdrawal from Gaza and the establishment of the Palestinian Authority. Israel’s constraints on manpower remain the same, and we have seen the effects of the intervention of the US on the results of the two Lebanon wars and the various Gaza operations. Our enemies continue to improve both in quality of weapons and fighting ability. They have adopted an asymmetric warfare paradigm in which they use their civilian population as human shields to deter Israel from responding.

Unfortunately, it would seem that Israel has been moving backwards instead of forward. We have done essentially nothing to counteract the psychological/cognitive war being waged against us. Instead of aiming for a decisive victory, we seem to be satisfied with “mowing the grass” in the hopes of kicking the next conflict down the road. We have adopted a defensive attitude to the missile threat, depending on very expensive anti-missile systems to protect us. And most dangerously, instead of becoming more autonomous we have become even more dependent on an increasingly unstable and weak United States.

The conflict seems to have devolved into exactly the kind of war of attrition that we wanted to avoid, except that is characterized by episodic, rather than continuous, violence. But it is a war of attrition nevertheless.

Here are some things that we can do to recreate our traditional position of deterrence, and also to prepare ourselves for the next shooting war:

These things are interdependent. Increased autonomy and cognitive warfare capabilities work to make it possible to neutralize the enemy’s human shield strategy. Suppressing the subversive NGOs will make it more likely that we can hold on to the critical parts of Judea and Samaria that are needed for strategic depth.

It’s essential to understand that our enemies have not given up, and they have not even substituted diplomacy and psychological warfare for shooting. They are simply using these non-violent weapons to soften us up in order to make it more likely that when the next “kinetic” war does come, they will win.

It’s possible to consider the conflict between Israel and its neighbors (and possibly Europe should be placed in the enemy column as well) as a long war that is essentially a continuation of Israel’s War of Independence. Like a game of chess it is in a positional phase, in which each side tries to obtain an advantage without actually taking any pieces. But the goal of checkmate is rarely achieved without some bloodletting.

The stronger and more autonomous we are, the less likely it is that they will try to overcome us by force. If there is any hope for peace, it will come from deterrence. But if we have no choice but war, then it should be war that we win. Decisively.

3 Responses to Getting back to (strategic) basics