The White House crosses out Israel

Posted on October 1, 2016 by Victor Rosenthal

This is at the same time laughable and insulting. The White House issued a press release about Barack Obama’s speech at the funeral of Shimon Peres. The funeral was held at the cemetery on Mt. Herzl in western Jerusalem, and the press release initially noted that it was in “Jerusalem, Israel.”

Now, for some reason it is a conceit of the White House and State Department that none of Jerusalem, both the western part that has been under Israel’s continuous control since 1948 and the eastern part that was occupied by Jordan from 1948-67, belongs to Israel. Perhaps this dates back to the partition resolution of 1947 – which was never implemented because it was rejected by the Arabs – that suggested that Jerusalem should not be part of either an Arab or a Jewish state, but rather should be placed under UN control.

In any event, the White House felt that it was unacceptable to let the “error” in its press release stand, so it issued a “correction” – with the word ‘Israel’ crossed out. 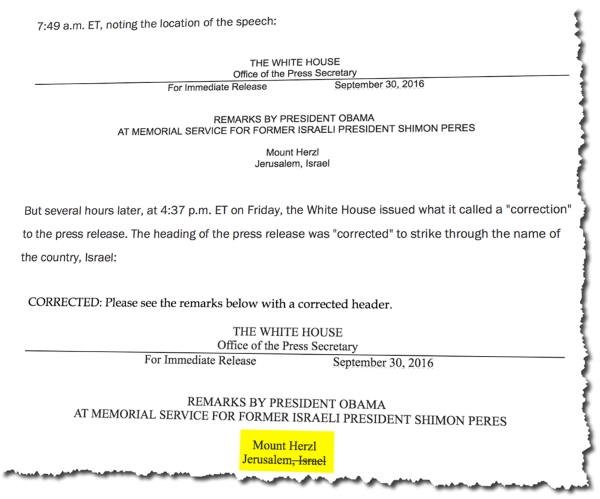 Photo courtesy of Brian of London

Yes, I know. That’s the convention for press releases. But you know, here in Israel we are a little sensitive about being crossed out, or not appearing on maps, or even being wiped off maps. And after all these years that Jerusalem has been our capital – since 1948 – don’t you think the White House and State Department ought to face reality?

That isn’t even all. In whatever country he thought he was in, Barack Obama gave a speech. Here is just a little bit of what he said:

Out of the hardships of the diaspora, [Peres] found room in his heart for others who suffered. He came to hate prejudice with the passion of one who knows how it feels to be its target. Even in the face of terrorist attacks, even after repeated disappointments at the negotiation table, he insisted that as human beings, Palestinians must be seen as equal in dignity to Jews, and must therefore be equal in self-determination. [my emphasis]

In other words, according to Barack Obama, the reason the Palestinian Arabs do not have a state is that we are prejudiced. Racists. Apartheid-niks. With Obama, it always comes down to this. The guy who grew up in a privileged family, who went to the best schools and universities, who was elected to national political office with the absolute minimum of qualifications, has a massive racial chip on his shoulder.

Never mind that the Palestinian Arabs want to create a state that will have no Jews in it, or that they insist that there is no such thing as a Jewish people (from the representative of a ‘people’ whose peoplehood dates to the 1960s), or that their media makes a habit of inciting their youth to go out and stab or run over Jews. Nope, no prejudice here – just “frustration” and “despair” that they haven’t been able to realize their “dreams,” which happen to be about killing Jews and taking their country.

One wonders if it might be possible to take the President and State Department – which as far as I know do not refuse to recognize the capital of any other country in the world –  more seriously when they talk about prejudice if they stopped applying their offensive double standard to Israel.

3 Responses to The White House crosses out Israel