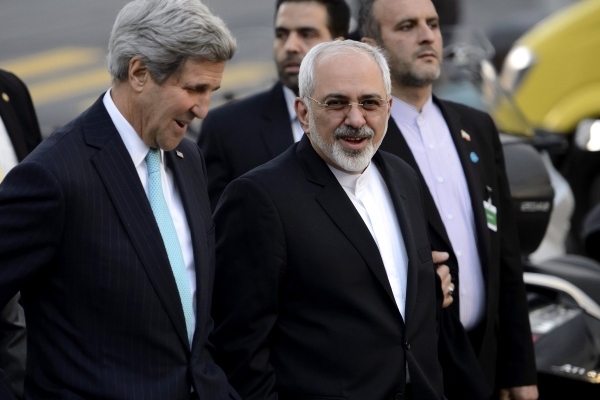 It’s now time to see whether or not we are able to close an agreement … But I want to be absolutely clear with everybody, we are not yet where we need to be on several of the most difficult issues. …

This negotiation could go either way. If hard choices get made in the next couple of days and made quickly, we could get an agreement this week. But if they are not made, we will not.

Either Mr. Kerry is in the grips of a historic self-delusion, or he thinks we are remarkably stupid.

Of course they will be able to “close an agreement.” The Western powers, led by the US, have found a way to creatively surrender on every major issue so far. Why should the remaining hurdles be too high for them?

I can imagine the chuckling among Iranian officials as they watch Western negotiators scurrying around trying to find a way to meet Khamenei’s latest dictats without looking too submissive.

It isn’t a secret any more. Kerry’s instructions are to make a deal and to make it look good, no matter what. We get it. Americans have short memories, and by the time things hit the fan, Obama will be on a high-priced speaking tour and Kerry will be spending his days aboard his yacht on Nantucket Sound.

I think the Iranians understand that they have little to fear from the US, unless the next election brings in a vastly different kind of administration. But by then it will be too late to prevent Iran from becoming a nuclear-armed power.

In Israel, which is not invited to the negotiating table and has to live almost next door to Iran, there isn’t space or time for self-delusion. PM Netanyahu said “what’s coming out of the nuclear talks in Vienna is not a breakthrough, it’s a breakdown.”

It’s also a betrayal. This is felt very strongly here, where – despite the historically spotty nature of US support – the US is probably the most beloved of countries. Michael Oren, an American-Israeli, wrote painfully that Obama had “abandoned” Israel. But that isn’t a correct formulation. Obama was never with Israel; he was always with the Muslim world and particularly the Palestinian Arabs. What has happened is that Obama and his team are trying to get America to abandon Israel.

In this they are following the playbook written by James A. Baker and Lee Hamilton, the 2006 Iraq Study Commission Report, which asserted that “the United States will not be able to achieve its goals in the Middle East unless the United States deals directly with the Arab-Israeli conflict,” and called for “a renewed and sustained commitment by the United States” to bring about an Israeli withdrawal from Judea and Samaria and the Golan heights. The report also called for creation of a Palestinian state and engagement with Iran.

The idea seems to have been that if the US made Assad and Iran happy, then they might help the US disengage from Iraq. Simply put, the thesis was that the US needs the Muslim world a lot more than it needs Israel, and its support can be bought by sacrificing Israel. Obama has taken this idea to heart, and combined it with his own personal pro-Palestinian bias, nourished by his mentors Edward Said and PLO activist Rashid Khalidi.

Obama’s 2009 Cairo speech, in which he addressed the Muslim world, was written by Deputy National Security Advisor Ben Rhodes, both an architect of and a spokesman for Obama’s radical Middle East policy. In 2011, “Mr. Rhodes urged Mr. Obama to withdraw three decades of American support for President Hosni Mubarak of Egypt.”

Today, he is aggressively campaigning for the Iran deal (I also suspect him of being the source of the notorious remark to Jeffrey Goldberg in October 2014 that PM Netanyahu is “a chickenshit,” a hypothesis supported by White House visitor logs). Rhodes was an assistant to Lee Hamilton and a staff member of the Iraq Study Commission.

I’m sure that nothing annoys Obama supporters more than the suggestion that we are facing a clash of civilizations between Muslims and the West. Unfortunately it’s true. The situation is enormously complicated, with countless factions and sub-factions of ethnic and religious groups fighting for control in places where conservative regimes that enforced stability have fallen apart — sometimes thanks to the stupid policies of Western nations, such as Iraq and Egypt. But one thing that unites most of them is hatred for the West.

Those conservative regimes may have been brutal and anti-democratic, but as we’ve learned, the alternative in most places isn’t liberal democracy; it’s worse brutality. Obama’s answer is to empower Iran to take control of the region. Can’t be worse than ISIS, right?

But Iran’s regime is revolutionary and expansionist. It is fundamentally opposed to Western, and especially American, culture and ideology – what else can you say about a country where “death to America” is chanted regularly at demonstrations and even sessions of its parliament? Like ISIS, it has a millenialist ideology that calls for regional and ultimately world domination.

The regime may not be as in-your-face-brutal as ISIS, but its objective is similar. And it is much more competent. It sees America as an enemy that must and will be overcome. A policy based on appeasement will only help it obtain its goals while projecting weakness and engendering contempt. Placing nuclear weapons in its hands is both suicidal and abetting murder.

A really good policy would be much more complicated and difficult. It would involve selectively supporting democratic and conservative forces, like the Iranian opposition and the al-Sisi regime, the Kurds, Israel, etc. It would mean intervention, maybe even military intervention, to prevent nuclear proliferation.

It might not succeed. But at least it isn’t guaranteed to fail.

This entry was posted in Iran, Islam, US-Israel Relations. Bookmark the permalink.

1 Response to Breakdown and betrayal