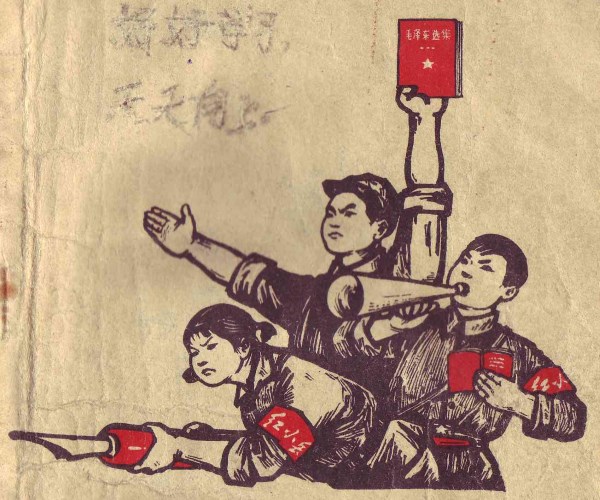 I was a college freshman in the US in 1960. Most students didn’t even have a stereo in their rooms, and female students had to be inside their (non-coed) dorms by 10:30 on weeknights. There were no personal computers, no Internet, no Hamas, no Islamic State, no Students for Justice in Palestine. I taught college for a year or so in 1971. Teaching wasn’t for me, and I am certain that generations of students benefited from my decision to do something, anything else.

Things were so different then that it’s hard for me to grasp what it must be like today to be a student or faculty member, in these days of safe spaces, trigger warnings, and privilege checkups (all of which sound like suppression of free speech to me). And I know well that it’s always difficult to understand a story like the one I will discuss without being there. But I am really distressed by what’s happening on US campuses.

The bare story is here. A professor of philosophy at Connecticut College, Andrew Pessin, wrote a Facebook post about Gaza in which he used the metaphor of a rabid dog: 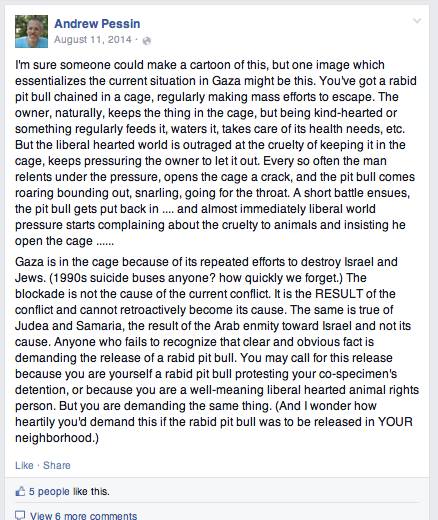 Student activists were livid, claiming that Pessin was a racist, comparing Arabs or Muslims to dogs. His response was that he was talking about Hamas:

In an interview with Inside Higher Ed, Pessin said he acknowledges that the post was ambiguous. He posted it after a series of 10 other comments written between July 23 and Aug. 11 about Hamas and the group’s tactics and goals. Reading those preceding posts would have made it clearer that he was using the metaphor of a pit bull to describe Hamas, he said.

“Let me say unequivocally, I am not a racist,” he said. “I am a passionate promoter of equal rights for all peoples. I’m a supporter of a two-state solution.”

Pessin deleted his post. That wasn’t enough for the modern-day Red Guards. His initial attacker, Lamiya Khandaker announced that she did not accept his explanation, was “infuriated, repulsed and depressed” and felt “unsafe.” Two other students wrote

On Wednesday February 25th, in the aftermath of an ironically timed event called the Jerusalem Food Tour celebrating shared humanity, we found our outrage.  We discovered information that put my apathy to rest; it made us sick.  It came to our knowledge that Andrew Pessin wrote on his Facebook page a rant on the nature of Palestinians.  Professor Pessin compared Gazan Palestinians to “rabid pit bulls” who need to be caged.  He described the Palestinian-Israeli conflict as a cycle of letting the “snarling dogs” out of their “cage” and then beating them back into it.  One person named Nicole commented on the post suggesting the “dogs” be put down.  Professor Pessin responded, “I agree.”  Professor Pessin directly condoned the extermination of a people.  A member of our community has called for the systematic abuse, killing, and hate of another people.

It turns out that the Facebook comments clearly and explicitly referred to terrorists, not Palestinians in general, but that apparently didn’t matter to the writers of the above.

Pessin became the subject of a massive barrage of criticism, insults, and threats because of his ‘racism’. It must have been too much for him to bear, because his response can only be called pathetic:

I am truly sorry for the hurt and offense that I have caused via my Facebook post of last summer, to individuals on this campus and now beyond.

It was written last August in the middle of the war between Israel and Hamas, and sat quietly (if publically) [sic] on my Facebook page until a Connecticut College student, displaying courage and integrity, emailed me about it on February 18 and described in no uncertain terms how she felt about it. I acknowledged how much I respected her speaking up, apologized for my language in the post, and removed it that very day. But my initial apology to her, and then to many others since the Voice articles appeared two weeks afterward, was rather defensive in tone. I see now—particularly after a moving conversation with a group of bright, brave, and sincerely wounded Conn students—just how damaging and hurtful the language of that post was. I made a great mistake in writing in the inflammatory manner that I did, and deeply regret the injury that I caused and have now directly witnessed.

It’s essential for me also to remark that I in no way hold and do not condone the terrible racist views that have been ascribed to me on the basis of the language of this post. I hope that my past actions and words already demonstrate that I am not the person some now think I am; I know that my future actions and words will. Let my first such action be the reiteration of my deepest apology for causing such wounds.

Even this wasn’t enough, as students published an online petition demanding that the college condemn his ‘racism’.

The image evoked in me is of China’s Cultural Revolution, when students hounded, beat, humiliated, and even murdered formerly respected teachers for ideological ‘errors’. Pessin has taken a medical leave from the campus.

You’ve seen the original Facebook post, one of the milder personal attacks, and his apologies. If you are like me, you are horrified. But I’ve saved the worst for last. In a letter to the Connecticut College community, president Katherine Bergeron wrote this:

By now, there have been many opinions expressed about the original Facebook post, as well as about subsequent comments on Yik Yak and elsewhere. But one thing has become extremely clear: the level of harm that incendiary language can have on a community. The post caused an outpouring of anger and pain among many different groups of students, faculty, and staff. The groundswell of reaction makes it clear that the issue goes far beyond the effects of a single post. It is about who we are as a community.

Earlier today, as I was writing this letter, I learned of another incident of racist graffiti in the restrooms of Crozier-Williams. We must take action immediately to expose and eradicate this ignorance and hatred. I have decided to cancel tomorrow’s classes to ensure these events receive the proper attention.

Connecticut College is a community that values the dignity of all people. As your president, I will not tolerate forms of racist or hateful speech designed to demean, denigrate, or dehumanize.

So a college president compared Pessin’s Facebook post to a bathroom-wall scrawl in which the word “niggers” appeared! And she leaves no doubt that in her mind, both are examples of speech that should be suppressed.

So much for American ‘higher’ education.

This entry was posted in Academia. Bookmark the permalink.