Should the Iranians trust Obama? 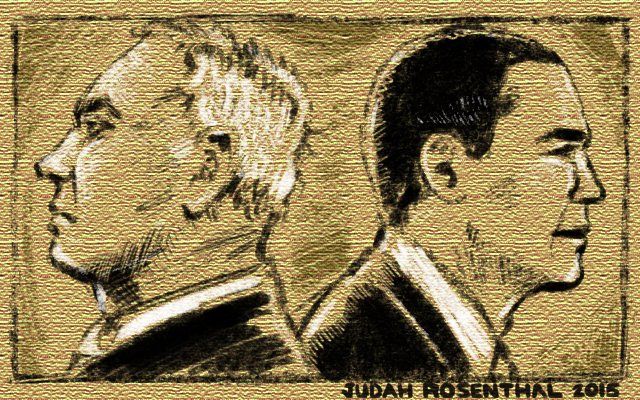 Some 47 Republican senators led by Tom Cotton of Arkansas have written an open letter to Iranian leaders which points out that according to the US Constitution,

Like the Iranian missile program, Democrats have gone absolutely ballistic. Fresh from groping the wife of the new Secretary of Defense on camera (see also here), dignified Joe Biden thundered that the act was “beneath the dignity” of the Senate. The New York Daily News’ headline screamed that the Republican senators were “traitors.”

But not only is the letter entirely correct from a constitutional point of view, there is a recent example of the US reneging on a similar executive agreement, in that case concerning commitments made to Israel.

In 2004, President Bush wrote a letter to Israeli Prime Minister Ariel Sharon in which he made two significant statements, which Israel interpreted as commitments:

It seems clear that an agreed, just, fair, and realistic framework for a solution to the Palestinian refugee issue as part of any final status agreement will need to be found through the establishment of a Palestinian state, and the settling of Palestinian refugees there, rather than in Israel.

As part of a final peace settlement, Israel must have secure and recognized borders, which should emerge from negotiations between the parties in accordance with UNSC Resolutions 242 and 338. In light of new realities on the ground, including already existing major Israeli populations centers, it is unrealistic to expect that the outcome of final status negotiations will be a full and complete return to the armistice lines of 1949, and all previous efforts to negotiate a two-state solution have reached the same conclusion. It is realistic to expect that any final status agreement will only be achieved on the basis of mutually agreed changes that reflect these realities.

But by 2008, even before Bush left office, the State Department was waffling on the latter commitment. National Security Advisor Stephen J. Hadley said in January 2008 that,

The president obviously still stands by that letter of April of 2004, but you need to look at it, obviously, in the context of which it was issued.

The “context,” of course, was that at the time the letter was written, the administration wanted Sharon to withdraw from Gaza and some of Samaria, and it would help support that move.

By the time Obama made his Cairo speech in June 2009, the Bush letter had been rendered completely inoperative. Obama insisted that any construction across the Green Line, even within settlements in those areas that were expected to remain in Israel’s hands, was unacceptable. “Settlements must stop,” said Obama, without qualification. Shortly thereafter, instead of “secure and recognized borders,” the concept of an agreement “based on” the 1949 armistice lines was introduced. And the refugee question was now considered a “final status issue” that would need to be negotiated.

On June 1, 2009, Deputy State Department Spokesperson Robert Wood was asked (copied here) by a reporter whether the Bush letter was binding on the Obama Administration. Wood simply would not give a straight answer, no matter how hard he was pressed.

Elliott Abrams, who was National Security Council Senior Director for Near East and North African Affairs at the time (the position recently given to anti-Israel activist Robert Malley), recalled that both sides considered that binding commitments were made, and these commitments were documented in writing. But

Secretary of State Hillary Clinton stated on June 17 [2009] that “in looking at the history of the Bush administration, there were no informal or oral enforceable agreements. That has been verified by the official record of the administration and by the personnel in the positions of responsibility.”

Abrams, who was certainly in a “position of responsibility” and should know, disagreed. Plenty of documentation exists that there were mutual agreements, he said. But how would Israel “enforce” an agreement that the US had reneged on, he wondered? I suppose you have us there, Ms. Clinton!

So, dear Iranians, here is an example of what a commitment from the President of the United States is worth: take it to Starbucks with three bucks and buy yourselves a latte.