How Herzog and Livni could win

Posted on February 23, 2015 by Victor Rosenthal 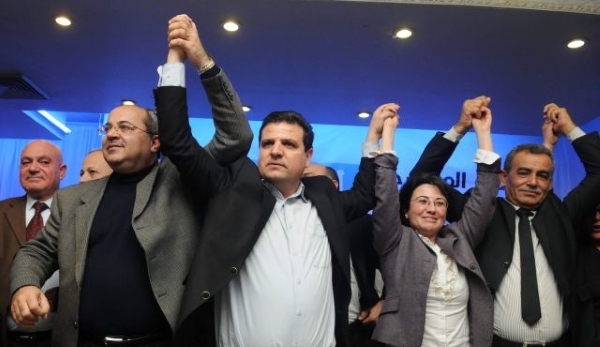 Some of the members of the Joint Arab List. Haneen Zouabi is second from right.

Last week I suggested that the aptly misnamed “Zionist Union” party would do anything to get into power, even — for the first time in Israel’s history —  invite an Arab party into their coalition, and yesterday Tzipi Livni made it clear that she did not rule this out.

The Joint Arab List is polling around 12 mandates now, and has the potential to go much higher. While voter participation among Israeli Arabs has always been low, some Arab leaders that supported a boycott in the past are now urging them to vote. And there is a well-funded (by foreign money, of course) get-out-the-vote effort aimed at them.

The race is still neck-and-neck with a “poll of polls” showing Netanyahu’s Likud and Herzog/Livni’s Zionist Union within one seat of each other. While the parties that would form a right-wing coalition still expect to get about 10 more seats than the Left (even including the Arabs), an opportunistic ‘center’ party could be tempted to flip leftward.

After the votes are counted, the President (Reuven Rivlin) will give some Knesset member the job of forming a government “after consultation with representatives of party groups in the Knesset.” This is usually understood to mean the one that is most likely to be able to form a coalition, but there is no legal requirement that this be so, at least in the first rounds. If that Knesset member doesn’t succeed, then the President can choose someone else.

In October 2008, Ehud Olmert resigned as Prime Minister due to criminal allegations (he has since been convicted). His deputy, Foreign Minister Tzipi Livni, was unable to maintain the coalition, so new elections were held in February of 2009. Livni’s party, Kadima, got the most votes with 28 seats to the Likud’s 27. But the President, Shimon Peres, gave Netanyahu the first shot at forming a coalition, because more of the other parties were prepared to join with Netanayahu than Livni.

The background was the mushrooming evidence of Olmert’s corruption, plus the negligence of the Olmert-Livni-Peretz government during the 2nd Lebanon War of 2006 (Labor’s Amir Peretz had been Defense Minister, one of the worst in Israel’s history). It was surprising and embarrassing that Olmert hung on as long as he did.

The left-leaning Peres did the right thing in this case even though he doubtless would have preferred Livni to his old enemy Netanyahu. But he had no choice; picking Livni would just have resulted in even more time without a government, and not only the party leaders but the nation had had more than enough of Kadima and Livni.

Nevertheless, if one party gets significantly more votes in the upcoming election than the others, I can see the President feeling that it would be ‘more democratic’ to give that party the first shot at forming a coalition, even if it is less likely to succeed based on initial consultations with party leaders. The pressure would be on everyone to get on board.

With a bit of luck, plenty of center-party cynicism, plus the Arab parties, it is imaginable that Herzog and Livni (they have a power-sharing agreement) could be the next Prime Ministers.

Of course it is by no means certain that the Arabs would agree to join a Zionist government, especially one led by a party called the “Zionist Union.” But I wonder what would happen if promises of pro-Arab legislation, ministerial jobs and other perks are dangled in front of them. You can be sure that Herzog and Livni will pull out all the stops.

The Zionist Union’s party list (without the Arab parties) has already been strongly criticized for being soft on anti-Zionism:

For example, they quote [Zuheir] Bahloul as saying “our Palestinian identity is stronger than the Israeli one.” MK Stav Shaffir’s quote is taken from a book on the 2011 social protests, of which she was a leader, which said she called Hatikvah a racist song. MK Merav Michaeli once said in an Army Radio interview that mothers should not send their sons to the army as long as the “occupation” continues. Bayit Yehudi used several quotes for candidate Yossi Yona, including “I don’t connect to this word, Zionism. It doesn’t express who I am” and “Yom Hashoa and Nakba Day should be on the same day.”

Shoval’s complaint was turned down of course, but there is no doubt about the anti-Zionism of  the Balad party, one of those that make up the joint list:

Balad is a political party whose stated purpose is the “struggle to transform the state of Israel into a democracy for all its citizens, irrespective of national or ethnic identity.” It opposes the idea of Israel as a solely Jewish state, and supports its recasting as a binational state.

Balad also advocates that the state of Israel recognize Palestinian Arabs as a national minority, entitled to all rights that come with that status including autonomy in education, culture and media. Since the party’s formation, it has objected to every proposed state budget on the grounds that they have discriminated against the Arab population.

The party supports creation of two states based on pre-1967 borders, with the West Bank, Gaza Strip, and East Jerusalem to constitute a Palestinian state and the implementation of UN Resolution 194 regarding the right of return to Palestinian refugees. [194 is interpreted by Arabs to mean that descendents of 1948 Arab refugees have a right of return to Israel — ed.].

It is unthinkable that representatives who agree with this platform can be part of the government of Israel. In fact, I believe that even the presence of a person like Balad member Haneen Zouabi in the Knesset is unacceptable. It simply stands in contradiction to Israel’s Declaration of Independence as a Jewish and democratic state. Unfortunately, the Supreme Court places its understanding of ‘democratic’ above that of ‘Jewish’. But that’s another issue.

1 Response to How Herzog and Livni could win