If coexistence is impossible, then what? 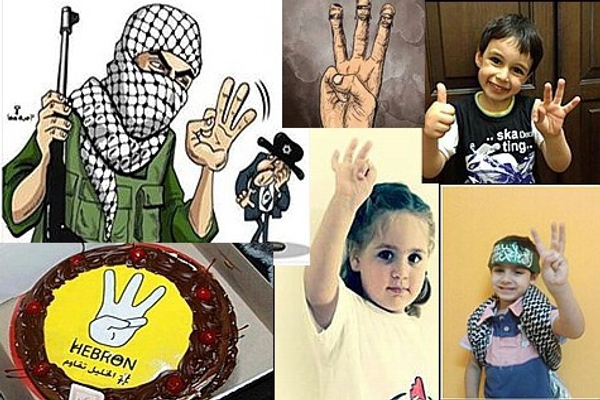 Palestinian society shows us what is truly in its heart

Today we found out that the three boys, Eyal, Gilad and Naftali, were murdered shortly after their abduction. I’m sure we’ll hear the full story, in horrifying detail, at some point.

I can’t imagine how the families must feel. Or rather, I can imagine it but I am certain that their actual experience must be far worse than what I can imagine.

There have been so many terrorist murders, so many murders of children. The Ma’alot massacre, The bus of blood, the Haran family, the Sbarro bombing, the Dolphinarium, the Fogel family. The Palestinians and their supporters tell you it is “resistance to occupation” but in fact it is pure evil, hate made substance. Hate made flesh.

The Left says that it is our fault that they are doing these things because we are not giving them what they want. But what if what they want is to kill us?

Societies protect themselves against murderous criminals by killing or imprisoning them in order to separate them from normal society.

“If a man comes to kill you, rise up and kill him first.” Good advice, but how do we follow it when a whole culture has been created out of the idea that they should kill us?

The Palestinian people have demonstrated by the whole-hearted support shown for the kidnappers, the murderers, that they are satisfied with the path they have taken, the path of hate.

The problem is not a few extremists or criminals or terrorists who need to be killed or captured. The problem is a culture whose essence is to negate ours. These acts will not stop until the culture changes or dies out, or we completely separate ourselves from it. I don’t think our society can tolerate living as a target of terrorism forever.

First we have to decide that yes, we want our society, the Jewish people, to survive, and to continue to do so in its historic homeland. It’s not such a forgone conclusion — many, especially the intellectual elite among us are not so sure. But let’s suppose that we do. Since the nature of the Palestinian Arab culture is not under our control, since we can’t educate them or change them, our survival depends on separation and deterrence.

Then we need to look at geography and military realities. What territories do we need to control as a necessary condition for our survival? Authorities agree that the Jordan Valley and the high ground of Judea and Samaria must remain under our control. This isn’t a political issue, and we don’t need to bring in the spiritual dimension to decide this. It is simply a fact that follows from the topography of the region.

But some of the area that is essential is heavily populated by Arabs, many of whom belong to terror organizations and most of whom wouldn’t accept Jewish sovereignty.

Caroline Glick is probably correct that annexation of all of Judea and Samaria wouldn’t create an Arab majority. She estimates that the Arab population of Israel would go from about 20% to about 30%. She believes that the same relationship that has been established with the Israeli Arabs could be extended to the Arabs of the territories.

The lesson I have drawn from these murders is that she is not correct. It won’t work. This marriage cannot be saved. The educational enterprise of Yasser Arafat and his followers, aided by the West, has succeeded — perhaps beyond expectations. There is no going back. The Palestinian Arabs will not, cannot, coexist with the Jewish people.

The logic is inexorable, unfortunately. We commit suicide as a society or we keep the territories — without the Arabs. The Arabs of Judea and Samaria must be encouraged to emigrate. Maybe it can be peaceful and even profitable for them, maybe not. That will depend on them and on the “international community.”

So if I am crazy, here is a suggestion: explain to me how you would deal with the situation. Do you want the Jewish people to survive? If so, do you agree that we can’t give up control of the territories? If so, do you think we can coexist with the Arabs? Can Israel become a 30% Arab state when most of those Arabs hate our Jewish guts?

If you want to refute my argument, show me where I’m wrong. Nothing would make me happier.

6 Responses to If coexistence is impossible, then what?