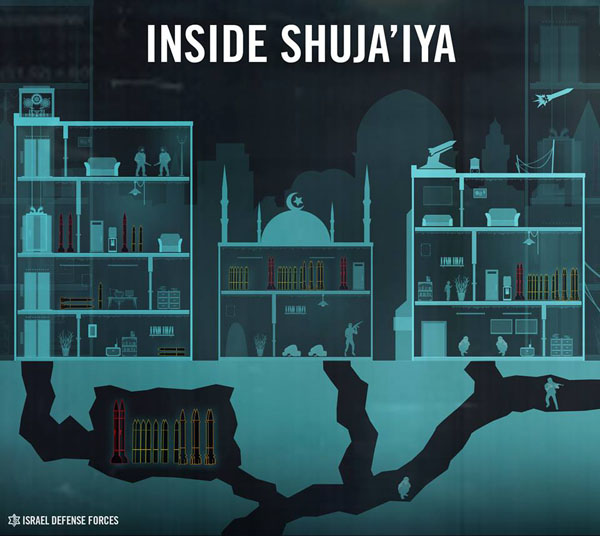 This morning I awoke to hear that at least 13, probably more, IDF soldiers were killed in battles with Hamas fighters in Gaza. Quite a few Hamasniks, and undoubtedly some civilians were killed as well. Now we are beginning to hear from the usual suspects that the IDF committed a horrible massacre, deliberately murdering women and children, etc.

They are also saying that Israel started this war, in order to commit a genocide on the population of Gaza. All Hamas wants is for Israel to lift its blockade, release prisoners, pay Hamas employees, and so forth. Then we can live at peace, at least until the hudna expires in 10 years (or sooner, if Hamas feels strong enough to move up its timetable). For some reason, Israel is not buying this idea!

Israel’s security cabinet was divided on the question of whether to OK the ground invasion, because everyone knew that it would unavoidably lead to deaths of IDF troops and Arab civilians. What tipped the balance was the opening of a tunnel and the infiltration of a group of heavily armed terrorists close to a small kibbutz near Gaza. Had they not been detected (by an all female IDF unit!) and intercepted, they would certainly have killed dozens of kibbutz residents and possibly taken hostages.

The IDF is aware of many such tunnels (I saw a report that some 20 or 30 have already been uncovered since the beginning of the ground action). Terrorists have been killed or captured in possession of heavy weapons and such things as handcuffs and anesthetics that would be used to take hostages. The amount of death and destruction that could be spread inside Israel if a group of gunmen succeed in infiltrating through these tunnels can only be imagined. Think of what 10 or 15 trained terrorists could do in a crowded city!

The tunnels take months to dig. They are lined with concrete — remember when the ‘international community’ was complaining about how the mean Israelis weren’t letting Hamas import cement and other construction materials? Apparently, between the smuggling tunnels under the Egyptian border that have just recently been destroyed by the al-Sisi regime and the materials Israel agreed to allow through its crossings in response to international pressure, Hamas got what it needed. Despite the fact that some 42,000 government workers did not receive their salaries for months, Hamas found the money to pay the tunnelers and the cement to build the tunnels.

What is clear is that it is not important whether this round of fighting was initiated by Israel or Hamas. Hamas has been preparing for it since the last one in November 2012, when it was only moderately wounded by operation Pillar of Defense. Since then it has been rebuilding its rocket forces, obtaining new weapons, expanding its underground bunker system and most important, digging terror tunnels. War was inevitable as soon as Hamas believed that it was capable of waging it. This is Hamas’ war, and Hamas is responsible for the consequences.

The Iron Dome system has saved countless lives. It has in effect neutralized Hamas’ rocket arsenal as a strategic weapon. On the other hand, it has made many people, inside and outside of Israel, think that it is possible to coexist with an armed Hamas by returning ‘quiet for quiet’.

It is not. Offensive and defensive technology and tactics move in lock step, with the advantage alternating to one side or the other. The threat of rockets may have been reduced (not eliminated) by Iron Dome, and the terror tunnels that today present such a great threat will also be dealt with, by a more brutal and lower-tech solution. But does anyone think Hamas will not come up with a new tactic?

Israel faces both a short-term and long-term challenge at this point. The short-term one is the need to hurt Hamas as much as possible while not giving in to the international pressure to stop fighting before Hamas is thoroughly disarmed. Hamas, of course, is doing its best to increase such pressure, crying victim and even encouraging its population to behave in ways that will create civilian casualties.

PM Netanyahu has been bragging about the degree of international support he is getting. Maybe he is, but in an unguarded open-mic moment, John Kerry let it slip that he personally — despite his official statements of support — does not think Israel is doing enough to reduce collateral damage, and that he wants to “get over there” and presumably rein in the IDF. Like other American officials, he appears to subscribe to the ‘cycle of violence’ theory in which both sides are morally equivalent.

Assuming that Kerry and other international players can be restrained for now, the longer-term issue is how to keep Hamas, or whoever rules the Gaza strip, harmless. That is a much, much more difficult question.