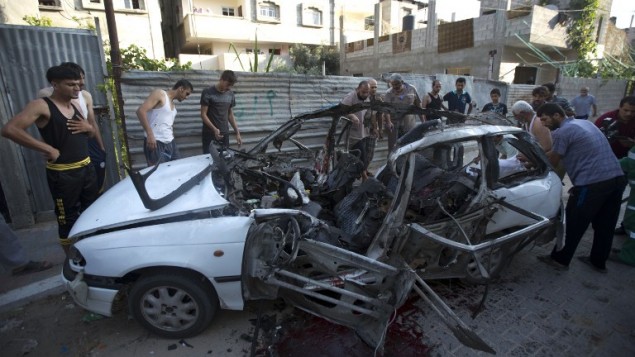 For years, the Israeli military has been using cellphone calls and small “warning rockets” — usually sent from drones — to tell people which buildings it is targeting and give them time to get out. It’s a time-tested strategy for the Israeli military, and it even has a name: “roof knocking.” Even if its intentions are good, however, it is a controversial tactic. …

Some critics say the tactic amounts to psychological warfare. There are reports of “warnings” that are given but no bombing following. There are also instances in which a bombing is not preceded by a warning, or, worse still, the attack may mistakenly destroy the wrong target or produce wider collateral damage – always a risk in cramped areas such as Khan Younis. Human rights groups have argued that targeting the homes of militia members violates international humanitarian law, whether warnings are made or not.

Let’s come back to earth. Has any other country done anything remotely like this in the course of fighting a war? Is it reasonable that Hamas should fire rockets at civilian targets in Israel with the intent to kill as many Jews as possible, but Israel should be criticized for its attempts to avoid hurting non-combatants?

Compare to the US in Iraq, or the Russians anywhere!

As PM Netanyahu said today, Hamas is committing a “double war crime” by storing weapons in schools and hospitals, and firing rockets at Israeli civilians from heavily populated areas. They don’t try to hide it, and indeed they encourage their people to become human shields. Speaking on Hamas TV, a spokesperson explained that

In parallel with the kinetic war we have the information war. Here Hamas and its supporters — including Palestinian Authority president Mahmoud Abbas — are trying to portray Israel’s relatively surgical operation as genocide. All kinds of bloody pictures, some from Syria, Libya, Lebanon, etc. are being posted on social media as ‘evidence’ of Israeli atrocities.

Abbas, who would be happier than a pig in mud to see Hamas wiped out, even went as far as to compare the murder of Mohammed Abu Khdeir by mentally disturbed football hooligans with “Auschwitz.” This isn’t really surprising from the guy who claimed in his doctoral dissertation that Zionists collaborated with Hitler to create a Holocaust — in order to get the survivors into Palestine!

Listening to Palestinian supporters, one would have no idea that the massive rocket barrage from Gaza began before Israel’s response, and that Israel held back for several days — while absorbing Palestinian rocket strikes — to see if Hamas would accept its offer of “quiet for quiet.”

They are also bringing back the accusation that Israel is using ‘disproportionate’ means to combat Hamas because this operation has seen (so far) 53 Palestinians killed and no Israelis. I will repeat again, as I did in 2008 and 2012, that this is nonsense. Proportionality has nothing to do with the relative number of casualties in a conflict. In international law, an army may use force proportionate to what is required to achieve its objective. The IDF’s objective here is to stop the rocket fire, and its restraint in avoiding collateral damage is far greater than customary among developed nations.

Palestinians think they have a ticket to ride called ‘resisting occupation’. Anything they do is legitimate, and anything the other side does is wrong. Reason, facts, logic and international law are all irrelevant for supporters of the Cause.

This entry was posted in Israel and Palestinian Arabs, War. Bookmark the permalink.