Hamas moves in, US shrugs 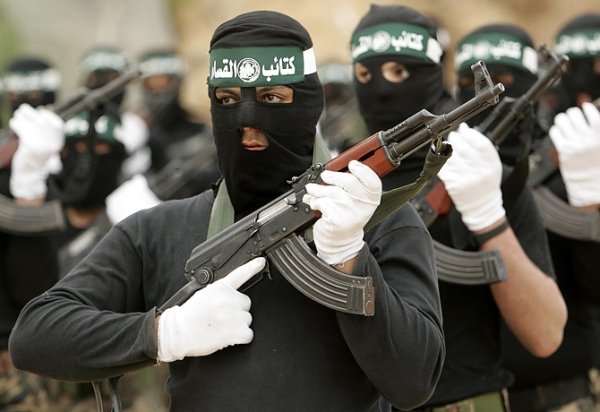 Hamas technocrats. “Based on what we know now, we intend to work with this government” — Jen Psaki, State Dept. spokesperson

QUESTION: What is the U.S. Government’s view of the so-called Palestinian unity government that was sworn in today by Palestinian President Abbas?

QUESTION: One follow-up on this.

MS. PSAKI: It does, but we will continue to evaluate the composition and policies of the new government and calibrate our approach accordingly.

Now, this is a “unity government,” and one of the partners is Hamas. All of the ministers were approved by Hamas, even if none of them comes to work wearing a Hamas headband, and it is unthinkable that Hamas will not have significant input into its decisions. The “technocratic government” is only a fig-leaf to allow the US and the rest of the ‘civilized’ world to ignore restrictions it placed on dealing with — and paying — murderous terrorists.

With a wink and a nod the restrictions passed by the US Congress disappear, as we knew they would, because the keystone of US policy in the Mideast is still, as it has been since the Arab oil boycott of the 1970s, to reverse the results of the Six Days War.

Considering that if Israel had lost that war it most likely wouldn’t exist today, the decision to fund Hamas is perversely logical.

Although US initiatives, presidential speeches, etc. always refer to a commitment to Israel’s security, in concrete terms this commitment has not extended past military aid — which is as much aid to US defense contractors as it is to Israel. Nothing is more important to Israel’s security than defensible borders, but the US has consistently pushed for territorial concessions to hostile entities like Syria and the PLO.

The sheer dishonesty of the present administration’s approach was made clear by John Kerry’s laughable proposal that the presence of the IDF in the Jordan Valley could be replaced by a “high-tech warning system.”

One of the arguments against allowing a Palestinian state to arise in Judea and Samaria has been that it might be taken over by Hamas, which would create a terror base next to Israel’s population centers, precisely as Gaza has become in the South. Now, with Hamas in the PA, there won’t even need to be a takeover! So if one believes that the US cares about Israel’s security, one would expect that the US would let up a little on the pressure against Israel for territorial concessions.

Ten days after Deputy Defense Minister Danny Danon told The Times of Israel that Benjamin Netanyahu had imposed a “silent freeze” on settlement building, the prime minister reportedly confirmed that he has suspended some construction in West Bank settlements, and cited American pressure.

Netanyahu told a group of settler leaders that the activity of the planning council of Israel’s Civil Administration, the body responsible for authorizing construction in the West Bank, had been partially suspended because the United States demanded it, the news site nrg.co.il reported Friday.

Netanyahu, who met Thursday night with mayors from 20 West Bank settlements, said the United States recently demanded that the Civil Administration not only refrain from issuing tenders for construction, but also freeze the activity of its planning committee altogether and not approve new projects that would later require tenders.

2 Responses to Hamas moves in, US shrugs