The Presbyterian assault on Israel 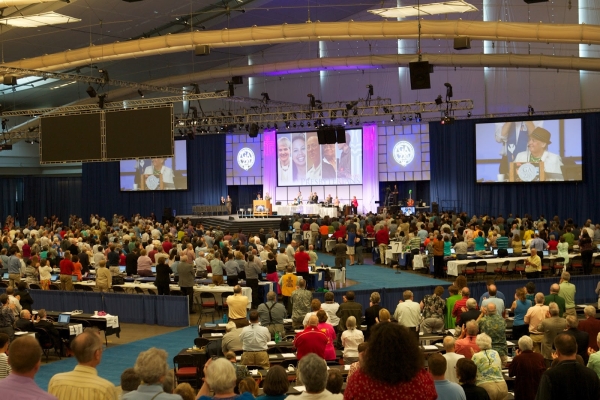 General Assembly of the Presbyterian Church (USA) in 2012, when a resolution to divest from companies doing business with Israel failed by 2 votes

The Presbyterian Church of the USA – PC(USA) – is one of the largest ‘mainline’ Protestant denominations in America with about 10,000 congregations and 1.8 million members. It has been steadily losing membership since the 1980s, and recently lost several hundred of its more conservative churches over the question of ordination of gays and lesbians.

Since 2004, the PC(USA) has passed resolutions calling for Israel’s withdrawal from all territory captured in 1967, right of return for Arab refugees, and suggesting that its board divest from companies doing business with Israel until ‘the occupation’ is ended. But the organization stopped short by two votes (333-331-2) of passing an actual divestment resolution in 2012.

Its resolutions have consistently followed the Arab line in full and placed all the blame for the conflict on Israel. The 2004 resolution is entirely devoted to condemning Israel with the exception of one line criticizing “Palestinian suicide bombings.” This was their response to the Second Intifada which by then had killed 1000 Israelis, almost all of them innocent civilians!

Just in time for its 221st annual General Assembly starting June 14, the PC(USA) has published and is heavily promoting a “congregational study guide” on the conflict (the document is for sale and copyrighted. A scan is here. I have a local copy if it disappears).

One would think that a “study guide” would at least hint at the possibility of different points of view about such a controversial subject. But this document is a 74-page polemic against Israel. It is a catechism in the Palestinian narrative, as one-sided as anything I’ve read since the Hamas Covenant.

The thesis of the document is that the Israel acts illegally and oppressively because of its adherence to Zionism, a philosophy which it explains as a form of “exceptionalism” in which Jews are privileged above other peoples.

This study explores the theological and ethical exceptionalism of Jewish and Christian Zionism, which have been sheltered from open debate despite the intolerable human rights abuses rooted in their core beliefs. [p. 9]

Zionism, it argues, is a racial-religious belief in Jewish privilege and superiority, not simply a movement for the realization of self-determination for the Jewish people in their historical homeland. Despite the almost complete lack of a ‘racial’ aspect to the Israeli understanding of the struggle with Arab rejectionism, it leans on the race button so effective with North Americans:

In spite of its thoroughly secular origin, Zionism flourished, especially after 1967, because of the inextricable blending of its political and religious agenda. This is one example of the similarities between Zionism, South African apartheid, and Jim Crow segregation in the Southern [sic] US: All three ideologies are a political-religious blend, providing religious justification for the politics of racial or ethnic discrimination.

Just to provide a flavor of the historical distortions throughout the paper:

In November 1947 the United Nations adopted a plan to partition Palestine into areas designated for a Jewish state and an Arab state. Each state would consist of both Jewish and Arab citizens, but tragically [!] no provision was made for an interim United Nations military force to protect the rights of minorities during the transition. As expected, war broke out between Jewish and Arab forces when Israel declared independence in May 1948. [my emphasis]

Why no mention of the fact that the Palestinian Arabs had been fighting to expel Jews from the region for at least 6 months prior to May 1948 (and had been perpetrating pogroms and terrorism against the Jewish population since the 1920’s)? War broke out? Is that the way to describe five Arab armies invading Palestine to once and for all wipe out the Jews and divide the land among themselves?

Every page provides new examples of the ugliness of this document (e.g., a paragraph headed “Binyamin Netanyahu: toward a single, Jewish, apartheid state”). There is a chapter about Israeli extremism (Baruch Goldstein, etc.), but no mention of the fact that the Israeli government and media severely condemn Jewish extremism while the Palestinian Authority celebrates the most vicious terrorists as heroes, and names schools after them.

There are chapters including stories about the ‘dispossession’ of Arabs in 1948 told without the slightest bit of context. There is one contrasting the “inclusive theology of the Qur’an with the exclusive theology of Zionism.” There is one arguing that Jews are happier and better off outside of Israel (tell that to Belgian and French Jews today). There are theological arguments refuting the view that Christians ought to be supportive of Zionism. There is the inevitable Beinartism about how American Jews are “cocooned” by the Jewish establishment to keep them from finding out about the oppression perpetrated by Israel against the Palestinians.

But this is a “study guide” which also includes notes for an instructor on how to present the material to what I assume will be a relatively naive audience. It is an 8-week course which includes the study guide, a book of essays and a supplementary DVD (which I haven’t seen). The authors recommend taking this long because

Your group will want to process what they experience during the sessions and to discern what God may be calling them to do after the series is completed.

The General Assembly next month will take up another resolution to divest from companies doing business with Israel. What do you think God will call on them to do?