The meanest bastards in history

So the Pope celebrates Mass in Bethlehem, but they can’t turn down the volume of the PA system at the nearby mosque? Listen:

Somebody was apparently trying to make a point, in case anyone wondered who’s in charge in Bethlehem.

And lots of Europeans were making the opposite point last weekend when they voted in surprising numbers (‘landslide’ is an exaggeration, but still) for parties that varied from radical Left to neo-Nazi — some of them moderate, others downright ugly — which shared one thing in common: an opposition to mass immigration of Muslims into Europe.

Yes, they were tired of EU regulations, unfair economic policies, etc. Some, like in almost-Jewless Hungary where the Jobbik party moved up to 3rd place with almost 15% of the vote, blamed the Jews. What else is new?

But above all they felt that immigration was out of control.

I was talking to a friend recently, saying that demographic trends pointed to an Islamic Europe sooner rather than later. “Don’t be so sure,” he said. “Europeans have a huge potential for violence. They’ve been the meanest bastards in history. Maybe they’ll rise up and fight.” 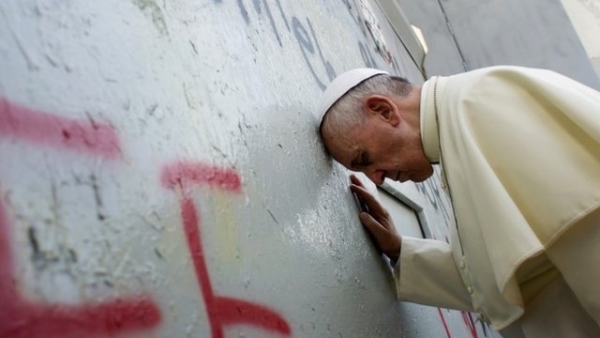 Pope Francis prays at security barrier, near Bethlehem, May 25, 2014

The Pope caused some excitement when he prayed at a concrete portion of the security barrier near Bethlehem. Palestinians claimed that he was praying that the barrier, which was built to prevent Arab terrorists from crossing into Israel and murdering people, would be removed. My thought is that he was praying for the Palestinians to stop promoting murder as a national goal so that it could be removed.

I mentioned this to another friend, who said something like “what do you expect from a saint? He can’t stop loving all humanity!”

That doesn’t seem to describe the feelings of most Europeans today, though.

This entry was posted in Europe and Israel, Islam. Bookmark the permalink.

2 Responses to The meanest bastards in history