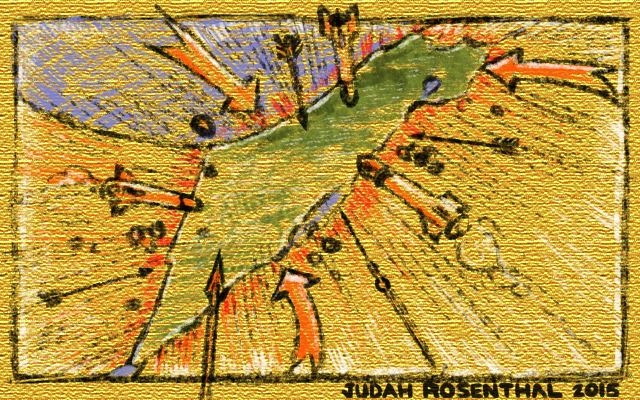 I just listened to an interview with Tuvia Tenenbom, author of Catch a Jew and I Sleep in Hitler’s Room. Although the interviewer talks far too much — I always wish they would just shut up and let the subject talk, especially when it’s someone as engaging as Tenenbom — I strongly recommend it. Be prepared to be upset, angry or depressed (depending on your personality) by what he reports.

Among the truths that Tenenbom discovered in his travels in Europe and Israel in the guise of a non-Jewish German journalist were a) many Europeans are really anti-Jewish and anti-Zionist, b) so are some Jewish Israelis, and c) they are getting together to work towards the replacement of Israel by some kind of non-Zionist state in which Jews will be a minority.

This isn’t news — NGO Monitor has been documenting the massive flow of Euros to anti-Zionist organizations run by left-wing Israeli Jews or Arabs for years — but Tenenbom emphasizes how pervasive the influence is, extending from large organizations like the Red Cross to small operations like the tour guide (a self-described ‘ex-Jew’) who brings groups of Europeans to Yad Vashem, where he explains that this is what the Jews are doing to the Palestinian Arabs.

It’s hard to see how a tiny country, which doesn’t threaten anyone and only wants to be left in peace deserves this. But the NGOs are only a tiny part of it. There is also the phenomenon of the worldwide academic onslaught on Israel, in which critical standards and honesty are thrown to the winds in the production of ‘scholarship’ that is no more than political polemics against Israel and the Jewish people; while, at the same time the professors replace teaching with indoctrination, and use university resources for political activity such as promoting boycott-divestment-sanctions against Israel. Jewish faculty are in the forefront of the effort.

Tenenbom also notes how many of the Jewish Israelis that gnaw away at the state that protects them — one of his interviewees is writer Gideon Levy of Ha’aretz — positively venerate Palestinian Arab Muslim culture. But, he points out, they don’t know a word of Arabic and haven’t read the Qur’an. What can they know about Arab culture or Islam?

Tenenbom uses the expression “self-hating Jews” to describe Jews like Gideon Levy, but I think that’s misleading. They don’t hate themselves — they see themselves as better than the others, the ones that have all the ‘Jewish’ characteristics that they hate (religious belief, for one). They identify with their enemies that want to kill them, even to the point of adopting their anti-Jewish beliefs, because they subconsciously think it will protect them.

Upset, angry or depressed yet? I haven’t even mentioned the United Nations, which spends millions of dollars each year on events, exhibits and production of materials that present the Arab narrative of the Israeli-Palestinian conflict (in which Israel is entirely at fault), or the Human Rights Commission which generates more resolutions condemning Israel than those for all other nations combined.

Then there is the multiplicity of smaller groups, trade unions, professional organizations, church groups (the Presbyterian Church USA comes to mind) which allow themselves to be used as vehicles for delegitimizing the Jewish state.

All this, despite the fact that there is no objective basis for it. Most anti-Israel arguments revolve around the alleged mistreatment — even ‘genocide’ — of Palestinian Arabs under Israel’s control. But the Arab population continues to increase, and its levels of health and nutrition are among the highest in the Arab world. More than 95% of the Arabs in Judea and Samaria live in areas controlled by the Palestinian Authority (and of course 100% of Gazans are ruled by Hamas). Even during wars, objective analysis has shown that Israel’s actions to reduce civilian casualties are unmatched by those of any other nation.

At any given time there are numerous wars, rebellions, insurgencies, occupations, massacres, etc. throughout the world which receive far less attention in the media and academia despite hundreds, thousands, or even hundreds of thousands of casualties (the Boko Haram uprising killed almost 11,000 in 2014 and almost 5,000 already this year). Did you know that the Second Congo War (1998-2003) caused more than 350,000 violent deaths, and 2.7-5.4 million excess deaths, with low-level violence still continuing to this day? The Israeli-Arab conflict is comparatively very small potatoes.

And then there are the positives: the remarkable number of scientific and technological advances by Israelis, the almost full-employment economy, the democratic political system, the high degree of personal freedom enjoyed by Jewish and Arab Israelis despite the pressure of wars and terrorism, the degree of equality for women and gay or otherwise unconventional people, the production of art, music and literature, and more.

It’s revealing that the haters object to pro-Israel people mentioning any of this. One is not allowed to say that Israel is the most (the only) LGBT-friendly country in the Middle East, because that is “pinkwashing,” using this undeniable truth to ‘cover up’ the oppression of Arabs. But if no empirical fact can count against the proposition that Israel is an oppressor, then that’s a clue that the proposition is itself not based on empirical facts.

So what is behind the irrational hatred for Israel and the amount of resources — Western, enlightened resources — devoted to an attempt to destroy it and to replace it with another unstable, undemocratic, racist Arab-majority state?

There are lots of reasons. American academic institutions have been infused with Arab oil money, and Arab countries have supplied many of them with activist foreign students. The UN is dominated by the non-aligned movement, which is controlled by the Organization of Islamic Cooperation, which in turn is led by the Arab League. ‘Progressive’ ideology includes a large serving of guilt for Western colonialism, and the Arab narrative that presents Israel as a Western colonialist resonates with the Left.

But I’m afraid that Tenenbom’s experiences in Europe and among Israel’s academic and media elite are the most important indicator. I said the hatred is ‘irrational’, and an irrational attitude has an irrational cause: in this case, pathological Jew-hatred, deeply implanted in so many Europeans, and paradoxically also in the best-educated Israelis.

This could be a lesson for those Jews who can’t decide to stay in Europe or leave. Don’t expect the Europeans to stick up for you if you stay. They don’t like you.

1 Response to The delegitimization industry