Posted on December 18, 2014 by Victor Rosenthal 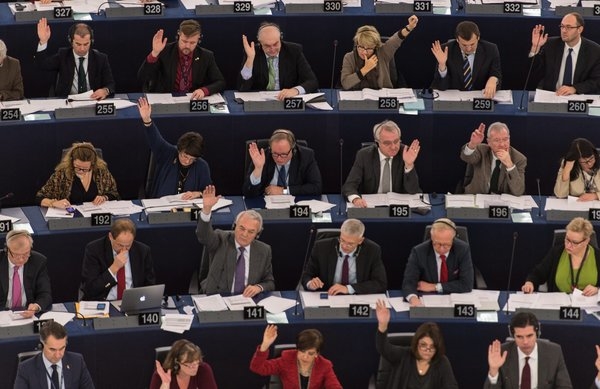 The EU Parliament votes yesterday that it “supports in principle recognition of Palestinian statehood and the two-state solution, and believes these should go hand in hand with the development of peace talks, which should be advanced.”

I admit it. I read Ha’aretz (but I don’t pay for it). How else would I know what Israel’s extreme Left is thinking? So I am used to reading that time is running out, we’d better “end the occupation” before the Europeans decide to make us a “pariah nation” and Obama forgets to veto something in the Security Council.

Netanyahu doesn’t understand Europe. His approach to the diplomatic crisis with France, Britain, Germany and others is simplistic. He believes the moves in Europe are motivated by European leaders’ eagerness to obtain the votes of the growing Muslim minority by advancing a pro-Palestinian agenda. In addition, he feels Europe’s attitude toward Israel is based on deep-seated anti-Semitic sentiments.

I had hoped Ravid would continue and explain what he thinks does motivate European anti-Zionism if not the things he mentions, but he didn’t. I suppose if asked he would talk about how “The Occupation” is immoral and building across the Green Line ‘frustrates’ the Europeans and the Obama Administration because it supposedly creates facts on the ground which prejudge the outcome of negotiations.

But assuming that the architects of colonialism and perpetrators of the Holocaust* have suddenly acquired a moral sensibility is a stretch.

The Arabs of Judea and Samaria are better off economically and more secure physically than those in neighboring countries. Objectively their biggest problem is the criminal and corrupt Palestinian Authority (PA). Surely someone motivated by moral concerns would be more interested in ending the depravity and horrific violence of Da’esh (ISIS) and Assad than in satisfying the desire of the Palestinian Arabs for statehood.

This would be the case even if the PLO’s demands were not transparently designed to create a platform to replace Israel with an Arab state, and if it weren’t 100% clear that an IDF withdrawal from Judea and Samaria would bring a base for terrorism (probably under Hamas control) within a couple of miles of Israel’s population centers and airport. This isn’t rocket science (pun intended). Do you think they don’t understand this?

It’s also obvious that the Europeans don’t care about facts on the ground unless it is Israel that is creating them. The EU funnels money to the PA which is used for (illegal) Arab building in Area C, the part of the territories under full Israeli control according to the Oslo agreements, while every time Israel plans to build a few apartments in Jerusalem, they go ballistic. Why is Arab construction acceptable, indeed encouraged? Doesn’t it prejudge negotiations as well?

They pretend to be concerned about international law, which they (incorrectly) insist Israel violated by building settlements. But somehow they are letting precisely the same issue slide by in Georgia, Ukraine, Azerbaijan, Western Sahara, and Cyprus. How inconsistent!

The EU also doesn’t seem to have a problem with terrorism, as long as it isn’t directed at them. You would think that the response to the repeated acts of aggression by Hamas against Israel which have provoked three major confrontations (2008-9, 2012 and 2014) would be to isolate Hamas and try to force it from power. Instead, they want to pump money into Gaza, which will strengthen Hamas’ hold and help it prepare for the next confrontation. They have even removed it from the EU’s list of terrorist organizations to facilitate this.

This is not the behavior of people driven by moral considerations. As Caroline Glick told the Danish Ambassador (video), it is evidence that Europe is in the grip of a pathological obsession with Israel. An obsession to crush the life out of a state that they are sorry they permitted to come into being in the first place.

There are lots of reasons for the obsession, including the repugnance felt by internationalists for a nation-state that belongs to a people, the Stockholm-syndrome fear of antagonizing the practitioners of terrorism, an attempt to assuage their own feelings of guilt for their colonialist past and the Holocaust, the Muslim votes, and — yes — “deep-seated anti-Semitic sentiments.”

Israel will not withdraw from Judea and Samaria, even if Tzipi Livni or Isaac Herzog were to become Prime Minister, because even they understand that it would be suicidal in today’s world. I venture to guess that the members of the European Parliament get this.

Which proves that they don’t care, that withdrawal isn’t the immediate goal. What Europe really wants is to weaken Israel, to damage its economy, security and ability to defend itself, so that at some point it will disappear. And so what is happening now is probably a step on the road to the ‘pariah’ status that Ravid is so worried about.

We can’t satisfy the PLO and this is now apparently true of the EU as well. So be it. It may be difficult, but Israel will survive.

I wonder if a non-Muslim Europe will?

—————————————————
* The idea that only Germans were guilty is a comfortable myth; large elements of the population of the continent were happy to cooperate with the Nazis in their project, and Britain and the US knowingly denied sanctuary to hundreds of thousands of Jews trying to flee.