The ideological disaster of Oslo

Posted on December 12, 2014 by Victor Rosenthal 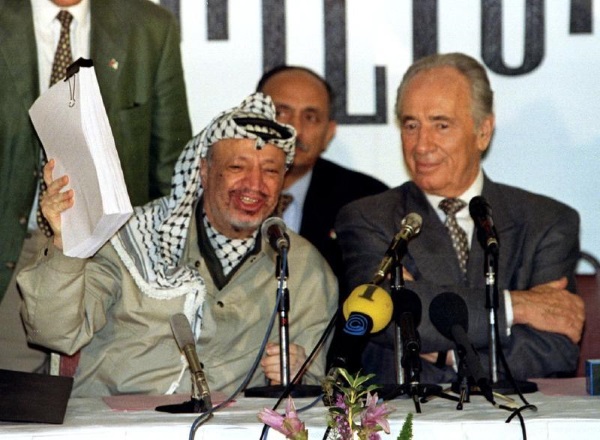 A lot of you liked yesterday’s post, probably because you have had more than enough of the dangerous nonsense that has become the conventional wisdom about Israel in the West. Western politicians and journalists have adopted the Arab narrative, which portrays Israel as the cause of its conflicts and its creation as a kind of original sin. Needless to say, the only acceptable ‘cure’ is to slice up and emasculate Israel so that it can more easily be gobbled up.

It’s easy to say that they are bribed and blackmailed by our enemies, afraid of or pandering to their Muslim populations, or indoctrinated by left-wing academics. All of these things are true, but there is another reason that so many in Europe and the US have adopted an ahistorical, counterfactual and immoral story as gospel.

To a great extent Israel is responsible for subverting its own narrative, and I think we can point to a specific event that marked a turning point.

On September 13, 1993, PM Rabin signed the “Declaration of Principles on Interim Self-Government Arrangements” along with Yasser Arafat and Bill Clinton, the so-called ‘Oslo I‘ agreement. I have argued that this was the single greatest mistake — rising to the level of criminal negligence —  ever made by any Israeli government.

From a strategic point of view, it elevated the moribund PLO from an irrelevant terrorist organization to a pseudo-government, with territory, an army, and the legitimacy to receive what turned out to be a massive subsidy (including weapons and training for its army) from the West. It enabled the exiled gunmen of the PLO who were sitting isolated in Tunis to move into the heart of the land of Israel, where they could, and did, strike at its Jewish residents.

The Oslo accord led directly to numerous terror attacks, culminating in the Second Intifada, during which more than a thousand Israeli Jews were murdered by Palestinian Arab terrorists. The wave of bloody murder happening right now can be blamed on the ‘educational system’ and incitement begun by Arafat and continued by his successor, Mahmoud Abbas.

Someone recently said to me “true, but we had to try.” I disagree: I called it ‘criminal negligence’ because by 1993 we knew precisely who and what Yasser Arafat and the PLO were. If ever there was a case of what lawyers call the “should have known standard,” this was it.

(Let me just note that I don’t place all, or even most, of the blame on Rabin. He was both blindsided by the ‘architects of Oslo’, Yossi Beilin and Shimon Peres, and pressured by Clinton. But this is another post).

What is also important and often ignored is the psychological and ideological damage done by Oslo. It comprised no less than the adoption of the false Arab narrative by Israel.

The preamble to the agreement reads as follows:

The Government of the State of Israel and the P.L.O. team (in the Jordanian-Palestinian delegation to the Middle East Peace Conference) (the “Palestinian Delegation”), representing the Palestinian people, agree that it is time to put an end to decades of confrontation and conflict, recognize their mutual legitimate and political rights, and strive to live in peaceful coexistence and mutual dignity and security and achieve a just, lasting and comprehensive peace settlement and historic reconciliation through the agreed political process…

In other words, there is a “Palestinian people” whose representative is the PLO and they have “legitimate and political rights.” They are a people who have been denied their rights (by Israel), and they deserve redress.

In one swoop, we have given up the principles of the Mandate, which held the land in trust for the national home of the Jewish people and no other. We have accepted the self-definition of the Palestinian Arabs as a people with a claim on the land, which needs to be resolved in a ‘just’ manner. They are no longer Arabs (many of whom were recent immigrants from Syria or Egypt) who happened to live in the area in 1948, but a distinct people with a right to self-determination equal to ours.

Of course their self-determination has been defined (by them) as being incompatible with ours, and therefore the argument is made that the creation of Israel was an unjust act.

The academic post-colonialists go further and define the Palestinians as a colonized people, which implies that they get to kill us in pursuit of their ‘legitimate rights’ and we don’t get to defend ourselves.

And since 1993 we have gone along with most of this! Even our Likud government holds that there should be a “two-state solution,” albeit with various caveats intended to keep it from destroying Israel.

All, however, is not lost. The PLO has violated the Oslo accords in multiple ways, including by terrorism, incitement, failure to educate for peace, and — in a fundamental way — by unilaterally seeking recognition from the UN without making an agreement with Israel. In this way they expect to get everything they want without giving anything in return.

This makes it possible for Israel to declare that the Oslo agreements are null and void. But at the same time, it should issue a declaration of principles which contradicts the ideological misconceptions of Oslo. It should re-enunciate the principles embodied in the Mandate, and make clear that we do not recognize a ‘Palestinian’ nationality with a right of self-determination in the land of Israel.

This doesn’t mean that Israel should annex all of Judea and Samaria. It doesn’t preclude ceding some land to Jordan, for example, or creating autonomous Arab regions.

But it does mean that Israel is not obligated to allow the establishment of a sovereign Palestinian terror state on its eastern border.

This entry was posted in 'Peace' Process, Information war, Israel and Palestinian Arabs. Bookmark the permalink.

1 Response to The ideological disaster of Oslo