Why They Attack Jews in New York

Posted on December 29, 2019 by Victor Rosenthal 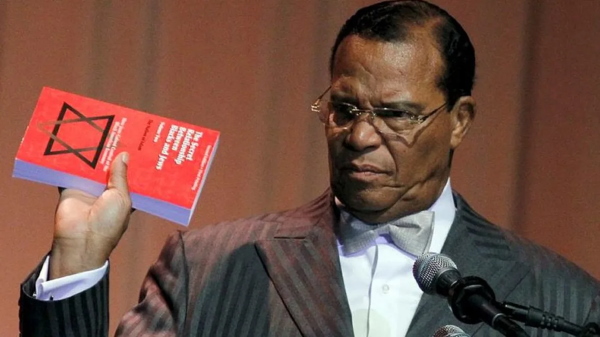 Louis Farrakhan holds a copy of his book, “The Secret Relationship Between Blacks and Jews”

Why are blacks and Hispanics attacking Jews?

I have been searching for a coherent statement by an assailant. Most of them don’t get past “f- you, Jews.” But it seems to me that they blame Jews for something, and feel justified in hurting them. The consequences of doing it are not great, so why not?

Blaming Jews is a subset of blaming others, and the feeling that others are responsible for one’s problems is popular today. There is a concept in psychology called locus of control, and individuals can be placed on a scale depending on the extent to which they believe that their success or failure is due to their own actions, or those of other people or “fate.”

On one end of the scale are those with an internal locus of control, people who believe that what happens to them is primarily dependent upon their actions (or lack thereof). On the external side are people who believe that the course of their lives is determined by external factors, and that their own agency has little effect. Here is a simple test you can take to see where you are on the scale.

Everyone knows somebody on the external extreme, the kind of person that always blames others for their problems. If he or she doesn’t get a job or a promotion it’s because somebody screwed them. Nothing bad that happens to them is ever their own fault. These people can be hard to live with. Their negativity is self-sustaining: nothing good happens to them because they do nothing to help improve their situation, because they believe that nothing they do matters; and this just reinforces their belief that “the system” is oppressing them.

Obviously, sometimes things happen because of external influences. Sometimes you get lucky or unlucky. Sometimes it helps to know someone. Sometimes the deck is stacked against you. But at least in modern Western societies, you usually get what you deserve. A person in the US with an extremely external locus of control is usually misperceiving reality – that is, their actions could influence the degree of satisfaction they derive from life, but they do not believe this, and therefore do not act in a way that maximizes their satisfaction.

But in recent years it has become an article of faith on the Left that the system is structurally biased against “people of color (POC),” a term which includes black people, people whose ancestors came from a place where Spanish is spoken (except Spain), and Muslims with white skin who were born in the US like Linda Sarsour, and excludes Jews of any color and Protestants or Catholics of European origin. It includes East Asians if they are discriminated against, but not if they are successful.

A key word is “structurally.” The idea is that the colorless people (non-POC) who benefit from the bias made the rules in such a way that the system will help them and hurt POC. This is called “structural racism,” because it has been built into the structure of society, and doesn’t require explicitly racist behavior to injure POC. POC who believe this can complain bitterly that their problems are due to “racism” even if they can’t cite instances of blatant racial discrimination.

POC who are convinced that the system is structurally racist will be less likely to believe that their actions can determine the course of their lives. For them, the deck is always stacked. This ideology therefore conditions them to adopt an external locus of control, with all its negative consequences.

But humans like to anthropomorphize their problems. A Devil is more comfortable to the mind than abstract evil. A conspiracy is more comfortable than a complicated historical process. If society is set up to benefit one group more than others, someone must have set it up that way. And who is at the top of the pile in wealth and influence (at least, so you are told)? Do I need to say it?

I don’t, because people like Louis Farrakhan are saying it over and over, day in and day out. And Louis Farrakhan, the “GOAT” (Greatest Of All Time) is one of the most popular personalities in the American black community. According to Farrakhan, the Jews dominated the slave trade, created the Jim Crow system, exploited black talent and creativity to make money while leaving performers in poverty, introduced drugs and sexual deviance into their community, own stores and real estate that exploit POC, and more.

Ironically, Farrakhan’s philosophy calls for blacks to adopt an internal locus of control, and change their condition through action. But at the same time he is telling them that all their problems are someone else’s fault: the Jews.

The idea that a Jewish conspiracy is responsible for the perceived problems of POC in the US is widely believed. The “information bubbles” that surround people today make it possible for what would have been considered extremism in the past to become conventional wisdom within each bubble. If everyone in your neighborhood “knows” the Jews are responsible for its poverty and crime, who are you to deny it?

Just as the Palestinian educational system has produced a generation of young people who will cut a Jew’s throat – even a Jewish child’s – as easily as looking at him, the ideology of powerlessness against a society designed to exploit you, combined with explicit anti-Jewish rhetoric from respected figures, has created an angry young generation.

They are punching, spitting at, robbing, or cursing Jews. They have (mostly) not become murderers like the young Palestinians (yet).

It isn’t enough to discredit explicit Jew-haters like Farrakhan, not that it would be easy to do so. It’s probably also necessary to fight against the epidemic of blame ideology, in which everything bad that happens is someone else’s fault. Those who believe that they are primarily responsible for their own success or failure – a distinctly right-wing belief, by the way – will use their energy to improve their own positions, rather than to strike out at others that they perceive as enemies.

Until Americans figure out how to do that, Jews there will have to study krav maga along with Talmud. Just like Israelis.

6 Responses to Why They Attack Jews in New York