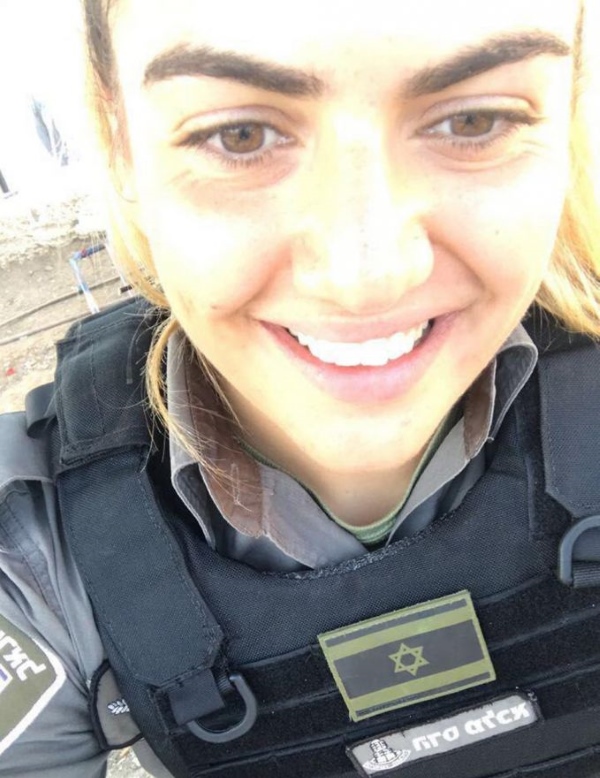 S/Sgt. Hadas Malka, z”l, who was murdered on Friday in Jerusalem. She took this selfie some 20 minutes before an Arab terrorist stabbed her to death. She was 23.

Every time a Palestinian Arab kills one or two or 30 of us, we take measures to increase security or to deter the next potential terrorist. We deploy police officers and soldiers, we demolish the houses of terrorists, we reduce the number of permits granted to Arabs to work in Israel or to visit the Temple Mount.

We are doing all of these things this time, too. The terrorists that murdered Hadas came in with Arabs from the territories who were allowed to enter Jerusalem to pray at the al-Aqsa mosque during Ramadan. So they’ll be checked more carefully next time. Numerous illegal residents of the capital were rounded up and deported.

But all of these measures are like aspirin to a cancer patient. They are aimed at the symptoms. We need to treat the disease. So first, the diagnosis:

Israel, or at least many Israelis, suffer from a severe case of what psychologists call imposter syndrome:

Despite external evidence of their competence, those exhibiting the syndrome remain convinced that they are frauds and do not deserve the success they have achieved. Proof of success is dismissed as luck, timing, or as a result of deceiving others into thinking they are more intelligent and competent than they believe themselves to be. …

If it is not addressed, victims can develop anxiety, stress, low self-confidence, depression, shame and self-doubt . People [and nations– vr] who suffer from impostor syndrome tend to reflect and dwell upon extreme failure, mistakes and negative feedback from others.

The Diaspora experience seems to have left some of us believing that we are unworthy of living in the land of Israel and of being sovereign in Jerusalem. They believe that our victory in the 1967 war was due to “luck,” and that the “negative feedback” – great expression! – we receive from Jew-hating Arabs and Europeans is in fact correct.

The syndrome is more than just a psychological quirk. It has had and continues to have disastrous real-life consequences.

It is bad enough that we are so neurotic, like unhappy little Woody Allens, but when we broadcast our doubts and insecurity to the world, including our deadly enemies, it becomes a direct cause of events like the murder of Hadas Malka.

Some like to say that the cause of terrorism is that the Palestinian Arabs have lost hope, that there is no “horizon” in view for them. But this is exactly the opposite of the truth. What the Arabs hope for is to finally get rid of us, and analysis shows that terrorism increases whenever the Palestinians become more hopeful. So our failure to act like the conquerors we are doesn’t make the Arabs like us any better; it actually encourages terrorism.

A prime example of this was the surrender of the Temple Mount to the Jordanian waqf in 1967. Perhaps Moshe Dayan and others thought this would help bring peace, but it had exactly the opposite effect, sending the message that we hadn’t conquered Jerusalem after all, and giving the Arabs hope that they could reverse the outcome of the war.

There’s no question of what the Arabs would do in a similar situation, because they already showed us. In 1948 they expelled every last Jew from the part of the land they controlled, made stables out of our synagogues and turned our gravestones into urinals. They probably expected that we would demolish al-Aqsa and put a synagogue, or even a new Temple, in its place. We had every right to do so, as the original owners of the land who had reasserted their control over it.

But we didn’t, and over the years we’ve behaved as though we lost the war rather than winning it in a rather spectacular fashion. We have little by little allowed pressure from the West and terror from the Arabs to justify concession after concession, with the worst one being the Oslo decision to reintroduce the poisonous PLO into the land that we had won at great cost.

The Arabs, who should long ago have lost hope in the possibility of dislodging us, were encouraged by our weakness, our apparent belief that we really didn’t belong here. So naturally, they continue to push against our weak spots.

It will be a long a difficult journey, but we can reverse the process. One good place to start is the place that our neurotic surrender started on the day of our victory in 1967, the Temple Mount. We should reverse the process whereby a “status quo” has been established in which the Muslims act like the owners of the property and Jews can visit only by their sufferance. It is not acceptable that Jewish visits to the Mount should be so sharply limited, while Muslims can come and go and even play football there if they wish. The absurd and humiliating regulation that Jews may not pray, lift their hands, or even cry on the Temple Mount should be revoked. Ultimately, a synagogue should be constructed on the site, as former IDF Rabbi Shlomo Goren wished.

The response to suggestions like the above is always that “it will inflame Muslim anger” and make the situation worse. The “status quo” is treated as untouchable (although it seems to inching closer and closer to excluding Jews altogether). But Muslims are quite capable of inflaming their own anger, and the more it is indulged the more inflamed it gets.

Another area in which our behavior needs to change is our perennial cooperation with failed attempts to negotiate a “two-state solution” with the PLO. Our Prime Minister and even Yitzhak Herzog have had moments of clarity in which they admitted that the idea is chimerical. And yet, we keep giving US Presidents and Secretaries of State hope that we can get them the Nobel Prizes they believe they deserve (and giving the PLO hope that it can weasel new advantages out of the process). Enough.

The struggle we are in is a struggle of wills as much as a military one. Terrorism can’t be stopped by force alone, because we share the same piece of land with Arabs and we are not going to wipe them out. It can’t be stopped by concessions, because they simply encourage the enemy to push harder. The only practical solution is to eliminate the terrorist’s will to fight, by proving to them that no matter what they do, we will not retreat, that continued violence will only make life for their people harder and move them farther from their goal.

The same policies that will preserve the country in the diplomatic and military arenas will ultimately end terrorism. Our actions should always be aimed in the direction of more sovereignty, not less. We must never give up territory, never release prisoners before the end of their sentences, and always respond to violence with disproportionate force.

No one who has not lost a child really knows what it is like, but every time someone’s child like Hadas is lost, it is painful for the whole society. It is every parent’s worst nightmare. Stopping the nightmares won’t be easy or quick, but no magic is required; just an understanding of what has to be done – and a will strong enough to do it.