A bug, not a feature 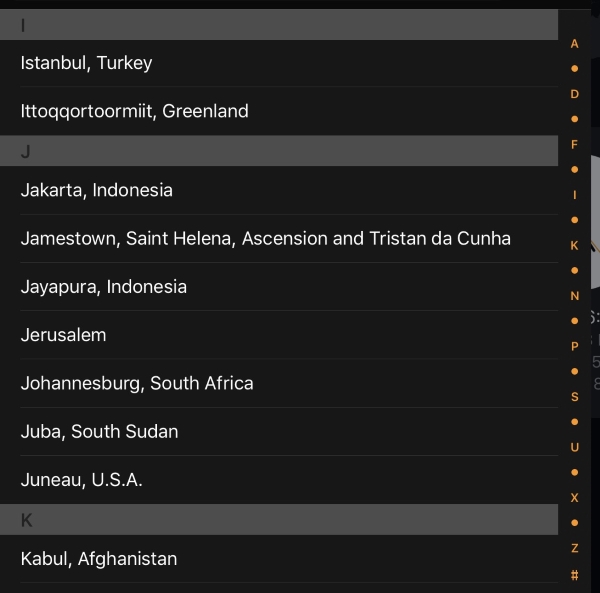 Can you guess what’s missing?

I am writing to report a bug in the Clock application of your iOS operating system (10.3.2), found on my new iPad.

Somehow the country associated with Jerusalem seems to be missing!

Almost every other city, even Ittoqqortoormiit, has a country. But Jerusalem does not (Taipei also lacks a country, but I will leave that to someone else to argue about).

I know this has to be a bug, because Jerusalem is in Israel! Not only is Jerusalem in Israel, it is the capital of Israel, and has been since the modern state was founded in 1948 (it was also the capital of David’s kingdom, back around 1000 BCE). Israel’s Knesset meets there, its Prime Minister’s office is there, and there are even several authorized Apple dealers there. So how can you not know?

I thought this was a new thing, but apparently the bug has been around since iOS version 7 in 2013! Surely it would be easy to fix.

I’m beginning to think that this isn’t a bug, but something that some of your people think is a feature. Believe me, it’s not. It’s a political statement that most Israelis take as offensive and insulting, whether it comes from the US State Department or Apple. If Jerusalem isn’t in Israel, where is it? On Mars?

The suggestion that Israel isn’t sovereign in its own capital is outrageous. It is really a way of saying that the legitimacy of the Jewish state is still tentative, after almost 70 years. Don’t pretend that it is anything less than that. Yes, we know that some people don’t think the Jewish people are a people, or that they should have a state. But is this the position you want your company to take?

I suspect you make a lot of money selling iPhones and other gear here. Israel came in third in the world for smartphone penetration in 2015 (74%, more than the US) and my guess is that it’s significantly higher today.

More importantly, Israel is one of the most advanced centers of technological development in the world, maybe the most advanced. Intel just bought an Israeli company for $15 billion. With a ‘b’.

Your competitor Microsoft has a big presence here, and so does Google. You don’t even have a company-owned store. Don’t you want us to use your stuff, write software for it and integrate it into our cutting edge developments in such things as medical technology and robotics?

We don’t have to, you know. We don’t even have to buy your products, and frankly, since you have been pretending at least since 2013 that our capital city is on another planet, I don’t see any reason to continue to do so.

So I am personally, in my small way, going to do my best to show you how we feel. I will start by explaining to as many Israelis as possible why they should choose an Android phone or tablet over an iOS device and a PC over a Mac. My next device will be an ABA (Anything But Apple).

Probably stockholders should dump their shares too. Your decision to take a side — the wrong one — in the conflict over our right to exist may have temporarily helped your sales in some markets, but in the long run will prove to be shortsighted.

Update [1526 IDT]: A reader has informed me that Apple has recently opened a development center in Israel. So they have apparently decided that they can benefit from the talent available here.

Possibly someone there knows what country Jerusalem is in and can fix the bug in iOS.

This entry was posted in Uncategorized. Bookmark the permalink.

8 Responses to A bug, not a feature