Being the nation-state of the Jewish people

In April of this year, the UN released the 2017 World Happiness Report. Using polling data collected by the Gallup organization, it ranked 156 countries in the world in order of how happy with their lives respondents said they were, on a scale of 1 to 10. For each country, they also measured 6 relatively objective factors: GDP per capita, social support, healthy life expectancy, freedom to make choices, generosity, and trust in business and government. By comparing the scores in these categories with a hypothetical “Dystopia,” to which they assigned the scores from lowest-scoring country in each category, they attempted to explain how much the objective factors contributed to the subjective perception of happiness.

Could this ranking possibly be meaningful? I have no idea, honestly, but Israel came in 12th out of the 156, beating the US which was in 15th place, the UK in 20th, and France which was a miserable 32nd. Norway, Denmark, Iceland, Switzerland, Finland, The Netherlands, Canada, New Zealand, Sweden and Australia were ahead of Israel. But not by much: Israelis give themselves 7.213 while the smug, top-ranked Norwegians claim 7.537. The most unhappy place in the world, the Central African Republic, rated themselves a 2.693. Trust in business and government contributed very little to Israel’s high score. Shocking! (not)

Although not the subject of this post, the score of the US has dropped very significantly since 2007. The report suggests that this is primarily due to social factors rather than economic ones.

The report’s writers do say that high perceived happiness is strongly correlated with the reelection of governments. Clearly, Israel has been a happy place lately.

But possibly more significantly, Israel leads the 36 OECD nations with a fertility rate of 3.1 children per woman (Mexico is a distant second with 2.2). And Israel’s rate is the only one of the 36 that is increasing. I can provide anecdotal evidence: one of the first things I noticed when I came here from the US was the number of pregnant women, people pushing baby strollers and walking with children. This despite the continuous terrorism, Iranian threat, periodic wars, compulsory conscription and reserve duty, ridiculous cost of housing, economic inequality and other quite serious problems. 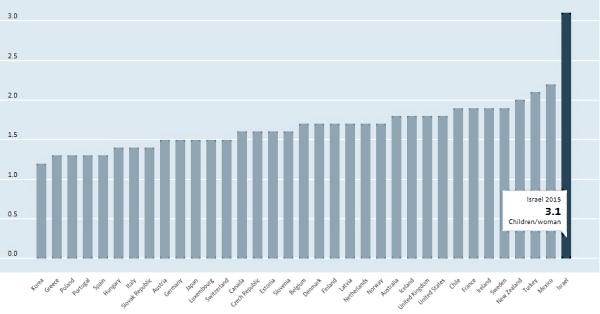 If you read Ha’aretz or listen to liberal American Jews like Peter Beinart, you will probably get the idea that the Jewish state is tearing itself apart. But it isn’t, and both Jewish and Arab citizens of Israel are relatively happy and thriving. The Left is prophesying doom, but meanwhile the number of Israelis that identify or vote with them – especially young ones – is dropping. Israelis think that they are happy, and they are optimistically bringing children into the world.

I am going to propose a radical explanation for this. I think Israel’s economic and social success is due to the existence of a collective purpose. If you ask them they will probably deny it, but – at least to a greater extent than in America or Europe – Israelis do identify with their state, and even those that dislike the state identify with the land and the people. Israeli culture today developed directly from the Zionist struggle to build a Jewish state, and the feeling of ownership this created isn’t all gone. Even the most secular Jews feel a tug in their heart when they consider that their ancestors walked here in biblical times. Israelis tend to help one another when they are in trouble because they see themselves as a people. They feel as though they are all in it together.

Even Arab citizens who oppose Zionism partake of and benefit from this culture, although they are more likely to identify with a family or clan than the state. But yes, Jews and Arabs sometimes help one another and some Arabs will even say they are proud to be Israeli!

Certainly the concept of a Jewish state, not just a democratic one, amplifies the collective purpose of Israel’s Jewish citizens. This is one reason I favor the Jewish nation-state bill that has just been re-introduced in the Knesset.

Such a law has been proposed several times in the past – the last time in 2014, when it was abandoned as the Knesset dissolved itself in preparation for elections. Now it has raised its head again. On Sunday the Ministerial Committee for Legislation approved it, and it will be submitted on Wednesday for a preliminary reading in the Knesset as a government-backed bill.

The various versions of the law have all been quite controversial, even in watered-down compromise form. Apparently, the idea of a new Basic Law – in essence, a piece of Israel’s “constitution” – that articulates the meaning of “Jewish” in the accepted formulation “a Jewish and democratic state” is considered both unnecessary and provocative by many.

Some opponents of a nation-state law, Arabs and the Left, believe that Israel ought not be, in any structural sense, a Jewish state. They would prefer a “state of its citizens,” a democratic state like the US or Australia. Such an Israel would be Jewish only by virtue of having a Jewish majority. Of course this position negates the Zionist principles on which the state was founded – both the practical idea that only the existence of a Jewish state can protect the Jewish people from antisemitism, and the spiritual one that ties the Jewish people to their historic homeland.

“So what?” many would say. But such a change would be very dangerous and might endanger the identification that Israel’s Jewish population feels for its country. It might damage the collective purpose that historically led Jewish Israelis to make so many sacrifices for the sake of the state, and which is in part responsible for its surprising success today. If Israel is just a small Australia, why not go live in the real Australia where you won’t have to do reserve duty? How long would there continue to be a Jewish majority?

Paradoxically, the coherence and national purpose of Israel’s Jewish citizens benefits Arab Israelis as well. If there can be coexistence between Jewish and Arab Israelis (I am not talking about the Arabs of the territories now, who present a much more complicated problem), then it will require a recognition by the Arabs that being Israeli means living as a national minority in a Jewish state.

The Jewish nation-state bill should therefore recognize the existence of such minorities and guarantee their rights, while at the same time assert the identity of the state as the state of the Jewish people.

We are walking a tightrope. One fifth of our population is Arab. After 69 years they are not going away and we can’t pretend not to see them. We must see them as equals in every respect, except that of national rights. But by the same token, they must understand that Israel is a Jewish, Zionist state with a national purpose defined by the Jewish people.

3 Responses to Being the nation-state of the Jewish people