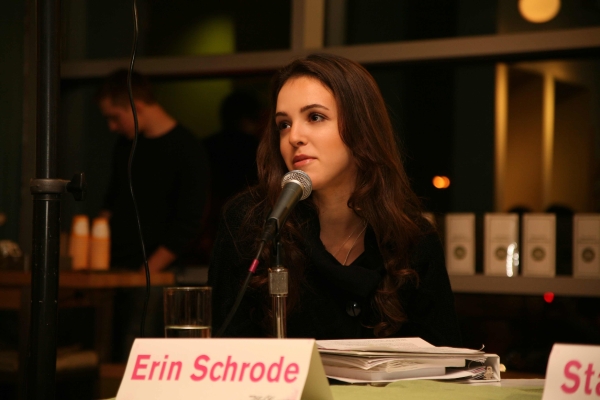 A 25-year old woman who is running for Congress in California has been the target of a remarkably ugly campaign of anti-Jewish abuse.

After Erin Schrode’s personal information was posted on a neo-Nazi website, she received hundreds of messages of anti-Jewish abuse, including death and rape threats.

It’s beyond horrible. Unfortunately, her response misses the point. She wrote on her Facebook page,

This unspeakable vitriol goes far beyond anti-Semitism. It is not merely an attack on me or on one people, but rather an attack on any individual or group who is targeted because of faith, race, nationality, gender, ability, orientation or other arbitrary classification.

No, it  is precisely an attack on you and your people. Saying that it is in some way a generalized expression of hatred deemphasizes the sharply focused nature of the attack. It blurs the fact that in recent times there has been an explosion of public expressions of Jew-hatred to a degree that has rarely been seen in the US since WWII.

Ethnic and racial hatreds are not all alike. They have their special flavors. There is nothing in the world quite like American anti-black racism. And there is nothing like the Jew-hatred that today is sweeping the world, even the supposedly immune USA.

It was a surprise for some. America was supposed to be different from depraved Europe, where something like Nazism could flourish, and where old fashioned Jew-hatred is growing by leaps and bounds today. That could never happen in America, they thought, where more or less since the 1960s Jews have been able to live wherever they wanted and work in whatever profession they chose. Today’s young Jews didn’t experience academic quotas, restricted subdivisions or jobs that were closed to them (who would believe today that a Jew would have had a hard time getting a position in banking?) And very rarely were they chased home from school for being “Christ killers.”

It was assumed that the America that was celebrated in Hollywood movies, where race or ethnicity were dealt with in a stereotypically non-threatening way, was the real America. There was continued discrimination against blacks, but most whites thought it was confined to the South and then eliminated by the 1960s civil rights movement. And Jew-hatred was ancient history. There were just a few crazy “bigots” running around and they would ultimately die out.

Well, folks, the golden age for American Jewry is over, and it is happening faster than almost anyone expected. There was a lot of wishful thinking in those movies (most of which were made by Jews, after all).

What happened is that back in the 1960s the Left eagerly adopted the KGB’s anti-Zionism, which it promulgated as part of its Cold War psychological warfare strategy in support of Soviet clients in the Middle East. As the facts of the Holocaust became generally known, many people were so horrified that they became immune to straight-up Jew hatred; but anti-Zionism was an acceptable surrogate.

Meanwhile the old Jew-hatred of the Right – the sort of people that appreciated Lindbergh and Father Coughlin in the 1930s – never went away. But the expression of Jew-hatred was socially unacceptable after the Holocaust, so they pretty much kept their ideas to themselves.

But little by little, the barriers broke down. The Holocaust retreated in history and people got tired of hearing about it. Some trivialized it by subsuming it under the general category of ‘bigotry’, and including all of Hitler’s victims, obscuring its central feature: it was an attempt to extirpate Jewish DNA from mankind. And there were those who said that it had been exaggerated, that Jews were using it to obtain special treatment, and so on.

The anti-Zionist Left became more and more open to the idea that maybe it was the Jewishness of Israel that was the problem. Anti-Israel Muslims in the West who did not live in the shadow of the Holocaust were more up front about seeing the Jews that supported Israel as the problem and saying so. The Occupy Wall Street movement pointed to the visibility of Jews in finance (they had finally been allowed to get those banking jobs) and media.

The Occupy movement and the growth of Muslim-led pro-Palestinian groups in universities marked a watershed moment for the Left, the point at which it began to believe that the Jews themselves were the problem, and to feel that it was acceptable to say that in public.

And what about the old-fashioned ‘paleo-’ Jew-haters? They saw that they were not alone anymore, that many intellectuals and left-wingers weren’t shy about expressing their opinions. Why should they repress their true feelings?

You would think that the blacks and the Jews would work together to oppose racial and ethnic hatred. But historically it has worked out differently.

The prevalence of black Jew-hatred is an ugly secret. It had multiple causes – the influence of the Nation of Islam, friction between Jewish merchants and residents of ghetto neighborhoods, historical conflicts over control of schools between Jewish teachers and black parents,  communist influence on radical black movements in the 1960s, demagogues like Farrakhan and Sharpton, and lately the success of the concept of ‘intersectionality’ which relates (with utter illogic!) the ‘oppression’ of American blacks and Palestinian Arabs. But however it began, today anti-Jewish attitudes are widespread among American blacks.

The Paleos hate blacks as much as Jews, so they find it convenient to blame the Black Lives Matter movement and other unrest on the Jews. The white middle-class Left is afraid of the blacks, but relates to them in a painfully obsequious way in order to defuse their fear and their guilt over white racism. So they buy into black Jew-hatred as well – especially if they themselves are Jewish.

All of this is mixed together and amplified by the social media. The so-called ‘echo chamber’ tends to drive expression in the direction of extremism. People live in information bubbles with those that agree with them, and when nobody pushes back, status in the bubble depends on who pushes the envelope the farthest.

Social media are used as a weapon, too. And Ms Schrode has become a target of that weapon, along with other public Jews.

I can’t conclude without a word about Donald Trump. Trump has been blamed for some of these social media attacks. A journalist named Julia Ioffe who wrote a relatively mild article about Trump’s wife Melania was an early victim like Ms Schrode. Other Jewish writers who have opposed Trump as well have been targeted.

It is 100% certain that some of the worst scum in America are supporting Trump. Like most things about Trump, it is not clear if he is encouraging them, failing to push back against their behavior, or is absolutely blameless and it is just a coincidence that these people see him as their savior.

For American Jews, it doesn’t really matter. The genie of Jew-hatred is out of the bottle in America, along with a lot of other unsavory creatures. It is not going back in.

I invite Ms Schrode to come to Israel and run for the Knesset (although she’s probably too leftish for me to vote for). But at least here she would have a future.

6 Responses to America crosses the line