Posted on December 13, 2015 by Victor Rosenthal 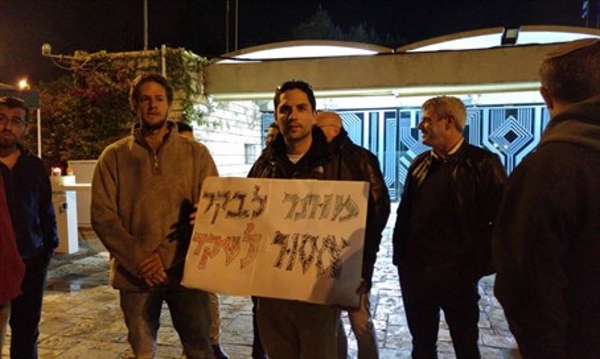 Reservists demonstrate at the President’s Residence. The sign reads “It’s permissible to criticize, forbidden to lie.”

Today, December 13, the extreme-left Ha’aretz newspaper and the BDS-supporting New Israel Fund will be holding a conference in New York. The President of Israel, Reuven Rivlin, will be one of the speakers.

The other speakers and panelists include politicians from the most farthest reaches of left-wing Israeli politics; anti-Israel propagandists like Gideon Levy and Amira Hass; representatives of J Street, the New Israel Fund, the Union for Reform Judaism and other US organizations that oppose Israeli policy and advocate American intervention in its affairs; Palestinian Authority negotiator and famous liar (“I am a descendent of Canaanite tribes”) Saeb Erekat; representatives of various foreign-funded anti-Israel NGOs; Rob Malley, Obama’s Mideast advisor, friend of Arafat, and partisan of the Palestinian Cause; Michael Sfard, distinguished practitioner of lawfare against the Jewish state; professional Israel bashers Lara Friedman, Peter Beinart, and numerous others – in particular, Avner Gvaryahu, of Breaking the Silence (BTS).

A word about BTS: the organization is massively funded by various foreign sources, including the EU, individual European countries and foundations associated with them, and the American New Israel Fund. BTS collects ‘testimonies’ of IDF “war crimes” or bad behavior of various types, and travels around the world preaching the gospel that the IDF is deliberately cruel and violates international law. When pressed by IDF investigators to document such behavior so violators can be prosecuted, they have been unwilling or unable to do so. Their reports have been called “propaganda, not journalism.”

IDF soldiers and reservists have accused BTS of spreading “lies and blood libels.” Journalist Amira Hass, they noted, had written that IDF soldiers and police have “executed” Palestinians and planted knives at the scene to justify their murders. They held a vigil outside Rivlin’s residence Saturday night calling on him to not attend the conference:

Amichai Shikli, one of the organizers of the protest, told Arutz Sheva that “at a place in which people like Amira Hass, Gideon Levy and ‘Breaking the Silence’ appear – you can’t give a speech there Mr. President.” …

“Tomorrow at the conference Amira Hass and Gideon Levy will speak. When we speak of the BDS movement, sometimes we think it’s all ghost stories. No; Amira Hass is BDS, Gideon Levy is BDS, there is no one else. They are the engine of the delegitimization of the state of Israel,” said Shikli.

“They are the people who tomorrow night will be quoted by the New York Times, by the Washington Post, and due to them students on campuses in the US will go out and say ‘the state of Israel is an apartheid state. The state of Israel commits war crimes.'”

Rivlin’s office responded with the remarkably lame excuse that since Gvaryahu would be on a different panel from Rivlin, there would be no connection between them, and that his appearance at the conference would be harmless.

Considering that at least 90% of the speakers at the conference will be attacking Israeli policy – and in many cases, are professionally engaged in the enterprise to demonize and delegitimize the Jewish state – Rivlin’s presence will lend legitimacy to their anti-Zionist project.

This is the second time within a few days that Rivlin has allowed himself to be exploited to further someone’s inappropriate agenda. Last Thursday night, he attended a ‘Hanukah party’ at the White House. While Rivlin stood beaming and intermittently nodding and applauding, a simpering Reform rabbi named Susan Talve made a fatuous statement (video) of ‘progressive’ principles that had little to do with Hanukah or Judaism.

In less than 4 minutes, she managed to call for “the gates of this nation [to be] open for all immigrants,” to praise the Black Lives Matter movement and groups working to “get guns off the streets” and to clean up “the fires of toxic nuclear wastes.” She identified with the Women of the Wall and then denounced “islamophobia, homophobia, transphobia, racism and anti-Semitism, and all the other ‘isms’ that dare to dim our hopes.”

Finally, she said that “we must do everything to ensure security for Israelis and justice for Palestinians, as allies committed to a lasting peace for all peoples.”

Islamophobia? Transphobia? “Justice for Palestinians,” while they are murdering Israelis on a daily basis? And how Christian of her to suggest turning the other cheek!

Throughout, Obama stood with a sardonic half-smile, as if he found the stupidity of these Jews amusing.

Rivlin should probably not have visited the US at all. Certainly he should have understood that Obama would try to sandbag him. And he should pointedly refuse to attend a bash-Israel-fest sponsored by Ha’aretz and the NIF.

Rivlin, I think, does not have the highly developed political sense he needs for his position. On the morning after the members of the Dawabshe family were horribly burned to death, Rivlin announced, before the investigation had gotten off the ground, that “Jewish terrorists” had set the fire. Today, four months later, four months during which the Shabak did its best to pin the murders on “Jewish terrorists,” they still do not have enough evidence to charge anyone with the crime. Perhaps that’s because the real arsonists weren’t Jews?

We are stuck with him for the time being, but couldn’t there be someone on his staff to keep an eye on him?