Duma and the ‘Wedding of Hate’

Posted on December 27, 2015 by Victor Rosenthal 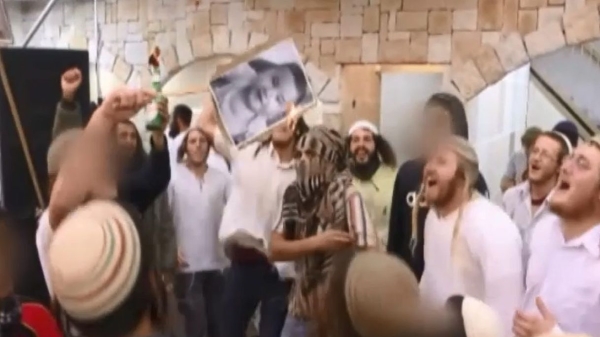 Yes, another post on the Duma murders (see all of them here).

I’ve argued all along that the hypothesis that the crime was committed by Arabs in conflict with the Dawabshes is at least worthy of consideration. Much about the “Jews did it” theory didn’t hang together, and the “Arabs did it” one was not followed up by investigators.

Although public figures and security officials said that they were on the verge of breaking the case, it did not appear that real progress had been made. In addition, there were claims that right-wing youths arrested in connection with the crime, some of them minors, were tortured – or at least subjected to exceptional pressure.

Although my public position has been simply to oppose the rush to judgment, in my heart I did not believe that Jews were responsible. I was convinced that the security services had ‘not allowed a crisis to go to waste’ and were using this crime to once and for all put an end to the “price-tag” phenomenon and to break the anti-Zionist right-wing extremist groups responsible for it. Vandals, I thought, dangerous political idiots, I thought, but not capable of deliberately burning a baby to death.

Then this week came the so-called “wedding of hate.” A video was shown on Israeli TV in which wedding guests danced with weapons, like our Arab neighbors do, and also waved a photograph of the murdered 18-month old Ali Dawabshe, with a knife stuck through it.

Correct – they celebrated the act of burning a baby to death. I saw it on video. One of the attorneys for the detained youths, Itamar ben-Gvir was present and he saw it with his eyes. It was real.

This was received by the country like a punch in the stomach. Suddenly, all doubts seemed to be erased. If they could celebrate it, they could have done it. Or at least they approved of it.

And yet, if there is one thing about this affair that has remained constant, it is that nothing about it seems to add up. The immediate pronouncements of “Jewish terrorism” on the morning after the murders, details about the fire itself, evidence of existing intra-Arab conflicts and other arsons in the village that was ignored, the apparent inability of the security services to get hard evidence – all of this and more was problematic.

Maybe I am simply incapable of accepting what should be self-evident, but there is something incongruent about the display of the photo of Ali Dawabshe at the wedding. Who would do such a thing? Even Arabs, who have murdered plenty of Jewish children, usually wave pictures of their martyrs, not their child victims.

Who brought the picture to the wedding? We don’t know. We do know that the extreme right-wing groups are thoroughly infiltrated by the Shabak. The owner of the hall where the wedding took place said that a number of ‘guests’ identified themselves to guards at the door as officials of the security services and showed IDs – apparently they didn’t have invitations. It is not unthinkable that the picture was introduced by someone associated with the security forces, in order to incriminate the people there.

I watched an interview with attorney ben-Gvir. He said that he couldn’t see at first who was in the photo, but that when it became clear to him that it was the child he rushed over and told the dancers to stop. “What if the media get hold of this?” he asked. Of course the interviewers immediately jumped on him to say “is that what you care about?” and of course he insisted that he was horrified, and only secondarily worried about the trouble it would make for his client. But there was absolutely no doubt that the media would get it, since the room was crawling with Shabak agents. And it had precisely the effect on the nation that he had feared.

The video that was shown on TV Channel 10 alternated between scenes of revelry, with guns, knives and the skewered photo of the child, and pictures of the Arab family that had lost three of its members (one other child remains in a hospital with serious burns). A horrible crime and a terrible celebration, but a professional and emotionally powerful video.

I am not in general a believer in conspiracies, frame-ups, and so on. But this would not be the first time that the Shabak mounted an operation to discredit the extreme (or even the not-so-extreme) right wing. Carmi Gillon, who was the head of the Shabak when Yitzhak Rabin was murdered, recently said that right-wing extremism was more dangerous now than at that time.

It’s ironic that Gillon was the one who was responsible for operating agent provocateur Avishai Raviv, who created a fake right-wing organization to discredit opposition to the Oslo process. In fact – in an action intended to create outrage not unlike the “wedding of hate” Raviv displayed a picture of Rabin in an SS uniform at a public rally.

Raviv has been accused of a lot more, such as knowing about Yigal Amir’s plan to murder Rabin and not taking action (he was tried and acquitted on this charge), and even worse things. But it’s a fact that the Shabak is no stranger to false-flag operations, and could have introduced the photo of Ali Dawabshe into the wedding and then ensured that everyone in Israel would see it.

I don’t know the whole truth. I don’t even know the very basic truth that is at the bottom of this affair, which is “who threw the firebomb that killed three members of the Dawabshe family?”

And I don’t think the Shabak does either.

This entry was posted in Duma arson-murder. Bookmark the permalink.

4 Responses to Duma and the ‘Wedding of Hate’