The story of a lie

Posted on September 28, 2015 by Victor Rosenthal

The Jewish people and their state are the target of an unending, worldwide hate offensive. Our reactions differ. Some of us get angry (that’s healthy). Others ignore it. And some become convinced that where there’s smoke, there must be fire. Maybe they hate us because we’re hate-worthy?

Nope. They hate us for a lot of reasons, including religion (that’s a big one for Muslims), envy, guilt, and greed – and sometimes it’s just a family tradition. But in fact we are pretty decent, as homo sapiens goes, and so is our country.

The facts don’t support the hate industry, so the folks who want us dead have also developed a lie industry to provide fuel for the haters. Today I want to look at one lie of the many excreted by that industry, a lie that is told over and over and has certainly been the cause of the deaths of numerous Jews and Arabs. 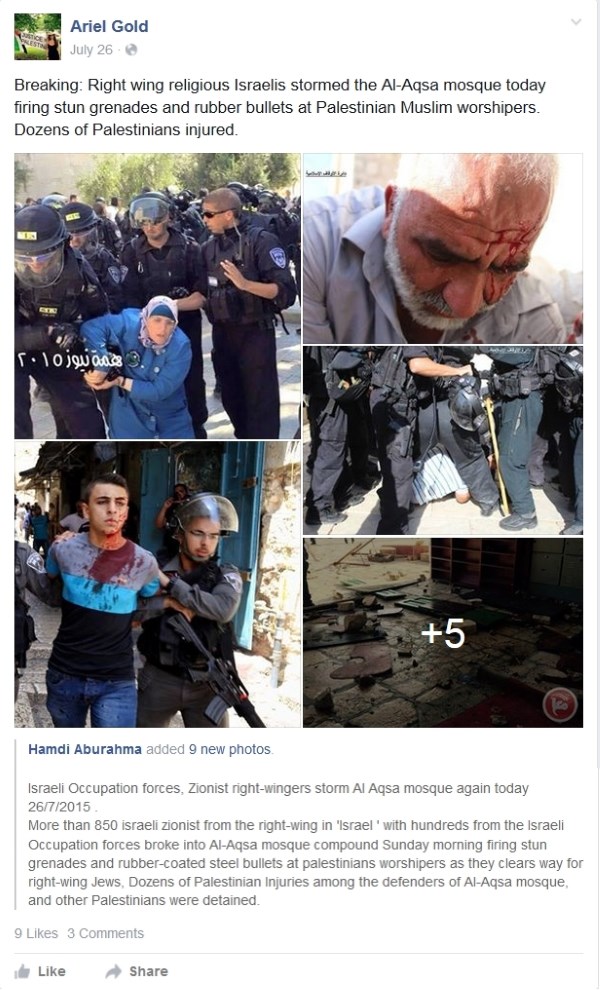 The woman who posted this, Ariel Gold of Ithaca, NY (h/t: Petra Marquardt Bigman), is a piece of work herself, a Jew who describes her occupation on her Facebook page as “delegitimizing Zionism at [sic] Community Activist.” If she does anything else for a living, it’s not evident from her posts, which display her as a one-person demonization machine.

But this isn’t about her (read Bigman’s article if your blood pressure is too low today), it’s about the lie above. So what actually happened at the Temple Mount on July 26th this year? Let’s look at the report in Ha’aretz, which nobody can accuse of being right-wing:

After a few months of relative calm at the Temple Mount compound, violence was reported at the Jerusalem site Sunday morning, with dozens of Palestinians youths barricading themselves at the Al Aqsa Mosque and clashing with Israel Police forces sent to the scene. …

During the altercation, police eventually stormed the mosque itself. An unknown number of officers were wounded, and three East Jerusalem residents were arrested for allegedly throwing rocks at Border Police.

Jerusalem police said they received information about Arab youths barricading themselves within the mosque overnight Saturday to confront police and prevent visits to the holy site on Tisha B’Av – the Jewish day of remembrance for the destruction of the First and Second Temples. …

According to the police, the clashes broke out after the Palestinians began throwing stones and shooting fireworks at Border Police and police forces that arrived at the mosque’s entrance. Afterwards, the youths fled into the mosque, throwing stones and bricks at the forces from within, and firing fireworks at them. An unidentified liquid was also thrown at the police.

So it was police, not “right-wing settlers” who “stormed” the mosque, and it was because the thugs (not “worshipers”) inside were planning to violently attack Jews who wanted to visit the site – not to enter the mosque and not to pray, because the status quo that Israel has accepted forbids it.

The “status quo” derives from the ill-considered decision made in 1967 by Moshe Dayan to give civil and religious control of the Muslim institutions on the Mount to the Jordanian waqf. Over the years, the Muslims have arrogated more and more power to themselves, at first forbidding Jews to pray, bring a prayer book, or even move their lips suggestively anywhere on the Mount. Recently they have begun to harass and try to intimidate Jews who try to visit by screaming at them from close quarters. Most of the time, the Israeli government has acquiesced in order to try to defuse Muslim agitation, but of course that is exactly the point of the agitation.

The “Al-Aqsa is in danger” meme has been used over the years to incite riots as well as terrorist violence against Jews, often by Hamas and its affiliates. Now the supposedly ‘moderate’ leader of the Palestinian Authority, Mahmoud Abbas, has joined in the anti-Jewish incitement. Speaking on official PA TV,

His honor [Abbas] saluted the Murabitin [the ones that scream in the faces of Jews on the Mount] and stated: ‘Every drop of blood that has been spilled in Jerusalem is holy blood as long as it was for Allah. Every Martyr (Shahid) will reach Paradise, and everyone wounded will be rewarded, Allah willing.’

Likewise, his honor [Abbas] emphasized that the State of Palestine will not exist without Jerusalem, and that the capital of the Palestinian State has to be East Jerusalem, which was occupied in 1967. He noted that we will not allow them to carry out their actions and divide the Al-Aqsa [Mosque], and stated: ‘The Al-Aqsa [Mosque] is ours, and they have no right to defile it with their filthy feet. We will not allow them to, and we will do everything in our power to protect Jerusalem.”

But who cares about the truth? Not Ariel Gold – and not her Facebook friends.

This entry was posted in Information war, Israel and Palestinian Arabs, Jew Hatred. Bookmark the permalink.