Accusations of Jewish terrorism are unfounded and dangerous

Posted on August 8, 2015 by Victor Rosenthal

The arson attack at the Arab village of Duma, near Shechem (Nablus) has so far taken two lives, including that of an 18-month old child. Two other members of the same family are in the hospital with severe burns.

The reaction in Israel has been one of horror, especially since it is generally thought that extremist Jewish ‘settlers’ were the perpetrators. Although usually words like ‘suspected’ are included, the clear implication is that it is just a question of finding the ‘settlers’ responsible for this shocking murder. Indeed, before an investigation even began, President Reuven Rivlin publically blamed “Jewish terrorists” for it. And he didn’t even say ‘suspected’.

The case has generated outrage in both the general public and politicians. The government immediately authorized the use of administrative detention – basically, imprisonment without trial – and more “aggressive interrogation methods” for Jewish extremists, and is already holding three of them.

But as yet, there has been no information released that there are any suspects in the Duma case, Arab or Jewish. And there is only one piece of evidence (that we know of) that points in the direction of Jewish extremists: Hebrew graffiti on one of the burned buildings.

It is important in a democratic state that we avoid rushing to judgment, especially in a case as emotionally charged as this one. Unfortunately, from what I read in the media and even hear in my own synagogue, we seem to have already done so.

In my last post, I wrote that there were good reasons for believing that extremist Jews might not be responsible. I think it’s important to explain them in detail.

So what do we know that points away from Jewish extremists? Much of the evidence comes from a young man, Yonadav Tapuchi, who visited Duma with a delegation from the Tag Meir organization, a group that opposes the ‘price tag’ (tag mechir) vandalism against Arabs perpetrated by Jewish extremists in Judea and Samaria. The residents showed the delegation the burned houses, and told their version of what had occurred. 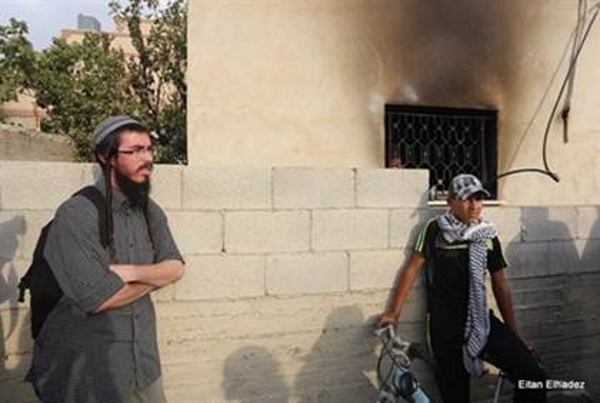 Tapuchi’s whole account is worth reading, but here are the forensically important points:

…the two houses … are located in the center of the village, and that in order to get there we had to travel a number of minutes from the entrance. Duma is spread out over a gigantic area, and the houses are situated at the end of a winding road, among fences and yards.

According to the Duma version, the attackers burnt one house, then saw that it was empty, and so they went to set fire to the next house. The second house is enclosed by a fence, and the windows are covered by a dense lattice; a firebomb cannot be hurled through the windows, and in any event it is very hard to reach the windows behind the fence. The arsonists had to go around the house, enter the yard, and place the firebombs through the lattice. According to the Duma version, the attackers entered the house, stood over the parents and did not let them leave until the flames engulfed the house. Only then did the arsonists run away from the village.

If the attack was done for nationalistic reasons, why pick these particular houses? Why would the attackers expose themselves both coming into the village and – after the houses had burst into flames – leaving it, on foot no less? And why weren’t they caught? One would expect terrorists to pick a house near the entrance to the village, one with easy access to windows.

What about the graffiti, the sum total of evidence that the perpetrators were Jewish extremists? There were apparently two of them on the walls. One was the single word נקמה, revenge, with a star of David: 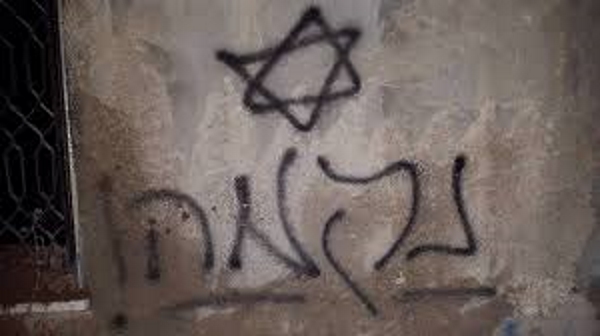 ‘Revenge’, on the burnt house in Duma

The other was a slogan that is associated with the Chabad movement, יחי המלך המשיח (the King Messiah lives) with a crown. 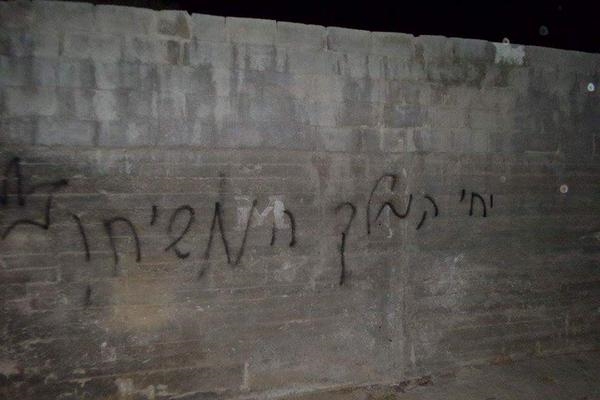 “The King Messiah lives” on a wall in Duma

Let’s start with this. First, the ideology is wrong. The extremist ‘settler youth’ that is suspected of the crime are far from Chabadniks, and Chabad itself is strongly opposed to violent terrorism or even nonviolent vandalism. But the slogan, often associated with a crown, can be found all over Israel, on billboards and posters, and even as graffiti. Someone who knew nothing about Jews and wanted to find something that suggested “Jewish extremist” might pick this. Here is an example of a t-shirt bearing the legend: 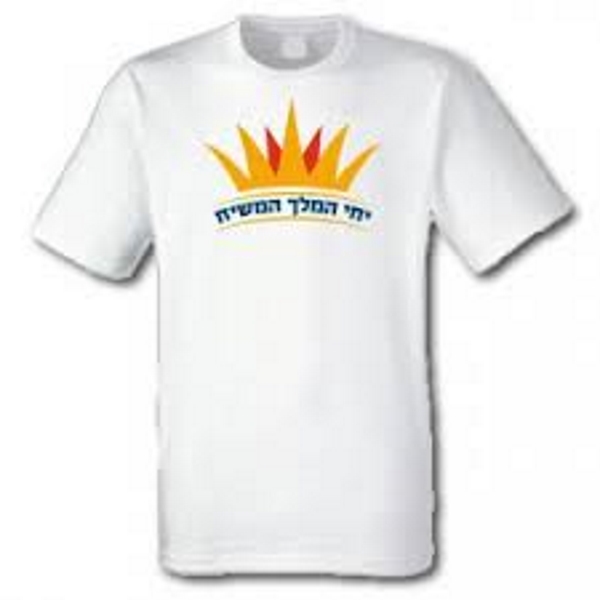 Chabad T-shirt with “The King Messiah Lives” slogan and crown

Now look at the single word, revenge. This has appeared in several cases of (non-violent) “price tag” vandalism. Here is an example: 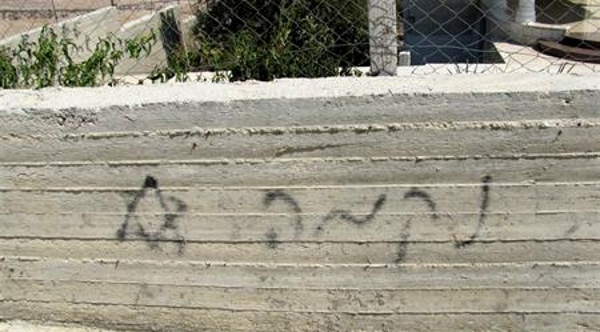 An example of “price tag” graffiti in another location

Note the way the letter koof, the second from right, appears in these images. I searched the web for images of Hebrew graffiti containing the letter, and none of them looked remotely like the example from Duma. Most looked like the second example. I don’t want to make too much of this, but combined with the other evidence, it is suggestive.

Another news article describes Arab media reports that the IDF “confiscated” security cameras from the village, implying that the village is not cooperating in the investigation. And it refers, unfortunately without giving a source, to “an ongoing 18-year feud between two clans in Duma.” Such feuds in Arab villages are not uncommon and are often quite violent.

I think the hypothesis that the arson and murders were committed by Arabs of a rival clan is no less likely – indeed probably more so – than that the perpetrators were Jewish extremists. In any case, based on what we know today, we can’t reasonably attribute the crime to anyone.

But I’ll go further: to say that “Jewish terrorists” or “settler extremists” committed the crime is an unwarranted accusation of murder, a case of sinat hinam, baseless hatred against right-wing Jews and residents of the territories. It is, in fact, an antisemitic blood libel. And using the unfounded accusation to justify the use of administrative detention or “aggressive interrogation methods” is reminiscent of the Reichstag fire.

I sincerely hope that very soon the investigation by the police and Internal Security Service will bear fruit. I know the culprits, no matter who they are, will be very severely punished. In the meantime, it would be best for our spiritual and political health to stop making accusations when all we have are hypotheses.

3 Responses to Accusations of Jewish terrorism are unfounded and dangerous