A message to American Jews on Yom Hashoah 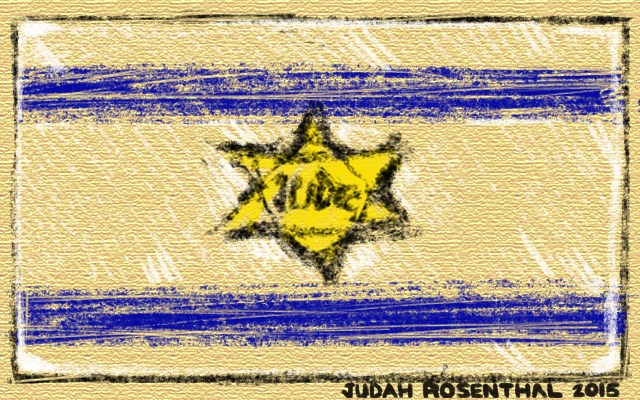 Today is Yom Hashoah, Holocaust remembrance day. It’s a day to honor the Jews who fought their murderers and those who were unable to, and to note the dishonor of those who, while in no danger themselves, failed to act to protect their people.

It’s not enough to have a big emotional catharsis on Yom Hashoah, to cry about the children, mothers, fathers, poets, Torah sages and others who were murdered because of their Jewish blood.

It’s not enough for well-meaning Jewish organizations to put on plays and presentations to bring a sense of the Holocaust to safe and well-fed Jews who otherwise would have little understanding of it.

It’s not enough to present programs about lost shtetl life, Yiddish culture, Jewish food and hazzanut (I guarantee that NPR will broadcast segments full of pathos that will tear out the hearts of their listeners — before they cut to the news program in which they will misrepresent the efforts of today’s Jewish state to keep bloody history from repeating itself).

These things are perhaps necessary, but they are not sufficient. Especially for American Jews, who while refreshing their memories of what happened 75 years ago, need to ask themselves hard questions about how they are responding to what’s happening today. Here are two lessons from the Holocaust and their modern-day applications.

1. You can’t depend on other nations not to endanger themselves for your sake, or even to lift a finger. With a few exceptions (Denmark, Bulgaria) any place that fell under Nazi influence became a furnace for its Jews. Roosevelt didn’t want to be bothered, perhaps, or maybe he thought a few less Jews in the world wouldn’t be a big disaster. The British government made the conscious decision to prioritize the maintenance of colonial control over its route to India over the lives of the Jews that could have been saved had they been allowed to go to Palestine.

2. Listen to your enemies and take them seriously. The Iranian regime talks daily about destroying Israel. It is ‘non-negotiable’, according to an Iranian militia leader. Hamas agrees and so do the supposedly ‘moderate’ elements in Ramallah. Don’t kid yourself. They mean it, just as Hitler meant it.

Today there is a Jewish state, in which about half of the world’s Jews live. It may be the last recourse for European Jews when Europe becomes Eurabia. A few years ago, many would have said that I was being overly dramatic, but not today. But Israel faces growing military threats on every one of its borders, while the modern manifestation of traditional Jew-hatred, anti-Zionism, is tearing at it economically, socially, legally and diplomatically — perhaps not as concrete a threat as the Iranian bomb, but potentially as dangerous.

Do you, American Jew, care about those Israeli and European Jews? If so, you should be fighting your administration’s initiative to ally itself with the Iranian regime and to remove the obstacles to its acquiring nuclear weapons. At the same time, you should be standing up aggressively against the delegitimization and demonization of Israel in your media and universities. Otherwise, you are morally equivalent to those American Jews — including Jewish leaders — who preferred not to rock the boat while the Holocaust was burning in Europe.

Jews in the US have their vision obscured by the thick fog that inundates thinking about Israel, a fog that is pumped out as if by huge machines powered by massive amounts of money, petrodollars from Arab countries, cash from George Soros and his affiliated fund-raising organs (e.g., MoveOn.org), and even money donated to organizations like the New Israel Fund and J Street by naive Jews. The fog is one part Arab narrative, one part vicious lies about Israel’s actions and one part pure Jew-hatred.

Blow away the fog and you find that there really is no hard moral question about whether to support the ‘oppressive, racist apartheid state’ of Israel because it is none of those things. The truth is exactly the opposite: Israel faces hateful, racist, genocidal enemies.

Blow away the fog and look at your president. Look at those he surrounds himself with.  Look at what he does, not what he says. You will see a man who is slandering Israel and its leaders, trying to weaken the state while empowering its enemies. America supports Israel, but the Obama Administration does not, and only the American people and its Congress can hold him back from doing even worse.

Let me close with one more point: don’t be smug in your safety, far from Hizballah’s missiles and the Iranian bomb, without a population of extremist Muslims to make your daily life hell, as is happening in Europe.

American Jews have had it very good since the end of WWII and especially since about 1960. That is unlikely to last. Antisemitic incidents are multiplying, and the university campuses are bubbling with Jew-hatred. Even your physical security is not guaranteed, with the infiltration of ISIS and Hizballah into your hemisphere.

There are signs of decay in your political institutions, your middle-class is under pressure, your family structure is cracking up, your government is becoming more authoritarian. All of these things are not good for the maintenance of a free, open, creative society that will also be tolerant of Jews.

Some day you, too may need a strong Israel to fight for your rights in the international arena. Don’t laugh — things change more rapidly than you may imagine. You may even need a refuge.