Terrorism in Europe, weakness in America

Posted on February 16, 2015 by Victor Rosenthal 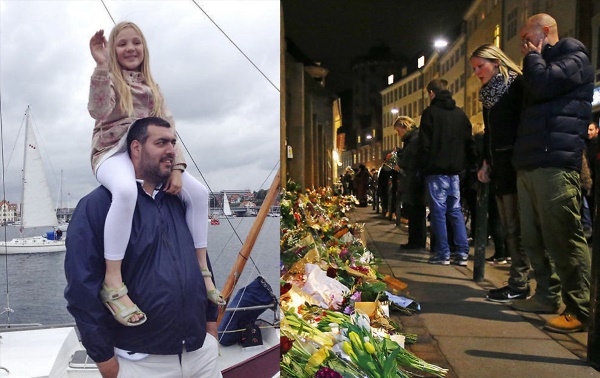 PM Netanyahu ruffled some feathers in the Jewish community of Denmark when he invited them to “come home” to Israel.

“We appreciate the invitation, but we are Danish citizens, this is our country,” Dan Rosenberg Asmussen, chairman of the Jewish Society in Denmark, told Reuters as he offered condolences to mourners at the synagogue.

This is understandable, especially in Denmark, whose population has historically been protective of its Jewish minority (unlike, for example, France, where authorities talk a good game today but have a poor record).

But European Jews have to be aware that demographic trends are against them. Much of the more and more frequent anti-Jewish behavior comes from the growing Muslim sector. That’s a fact, as is the fact that even without increased immigration from Muslim countries, the disparity in birthrates between ‘native’ Europeans and immigrants will guarantee that this growth will continue. And it’s unlikely that immigration will be cut back.

European governments are honestly horrified by the violence and promise to fight terrorism aggressively. But they mostly miss the point. In a very perceptive piece, Benjamin Weinthal explains,

To understand the continuation of violent anti-Semitism, the German philosopher Theodor W. Adorno said in post-Holocaust Europe, “We will not have come to terms with the past until the causes of what happened then are no longer active. Only because these causes live on does the spell of the past remain, to this very day, unbroken.”

What has filled the vacuum since Europe has relegated Nazism to a largely meaningless status, is the rise of Islamic-animated anti-Semitism enabled by an indifferent mainstream public coupled with an aggressive European Left. Anti-Jewish forces have turned Israel into a human punching bag.

Unfortunately, media and governments have bought into the anti-Israel conceptual scheme that inspires and is used to justify violence against Jews:

Prof. Gerald Steinberg, a political scientist at Bar-Ilan University, told The Jerusalem Post on Sunday, “The repeated and false allegations of Israeli ‘war crimes,’ ‘child killer’ and even ‘genocide’ from political groups under the facade of human rights and humanitarian assistance has certainly contributed to the lethal European anti-Semitism. And many European media platforms and government officials repeat these modern blood libels without bothering to verify the facts or the double standards that are employed.”

As a result, the problem will not get better. It will only get worse. In France, many Jews have decided that it is already intolerable.

This isn’t to say that there is the prospect of “another Holocaust” in Europe, and that Jews need to make plans for escape before it’s too late. It is not 1938 all over again. The changes that are overtaking the continent will be gradual, and little by little it will become clear that it is not a suitable home for us. Even the most self-deluded of European Jews will understand sooner or later.

American Jews are a different story. I doubt that they are in immediate danger from terrorism, at least not to a much greater degree than other Americans are. But their hubris and self-deception may be placing the Jewish community in Israel in danger. Several prominent American Jews, including Rabbi Rick Jacobs, head of the Reform movement and Abraham Foxman of the ADL have called on PM Netanyahu to back down from his planned speech to a joint session of Congress on the subject of Iran.

This is not surprising, really, since these Jewish leaders are close to the Obama Administration, which has pulled out all the stops to prevent Netanyahu from speaking and possibly torpedoing its planned deal with the Iranian regime. I can’t help but be reminded of the efforts of Peter Bergson (Hillel Kook), Ben Hecht and others to raise awareness of the ongoing Holocaust, and how they were viciously attacked by American Jewish leaders of the time.

In Israel the consensus of opinion is that the deal will leave Iran the ability to break out with deliverable nuclear weapons in a very short time frame. The very strident election campaign that is going on should not hide the fact that even those who will do anything to undermine Netanyahu understand that the deal is unacceptable, and while they are accusing him of damaging relations with the US, probably secretly hope he will speak persuasively before Congress.

From the point of view of Israel, it is 1938 again, in which the great powers sacrificed Czechoslovakia in a vain effort to appease Hitler. The difference, of course, was that Czechoslovakia did not have the power to act alone to protect itself, while Israel arguably does.

Chamberlain and Daladier gave in to the Nazis in the hope that they would obtain “peace in [their] time.” It’s hard to see what Obama thinks will come out of his surrender, but I can guarantee that it will not be peace.

This entry was posted in Iran, Terrorism, US-Israel Relations. Bookmark the permalink.

2 Responses to Terrorism in Europe, weakness in America