Posted on February 8, 2015 by Victor Rosenthal 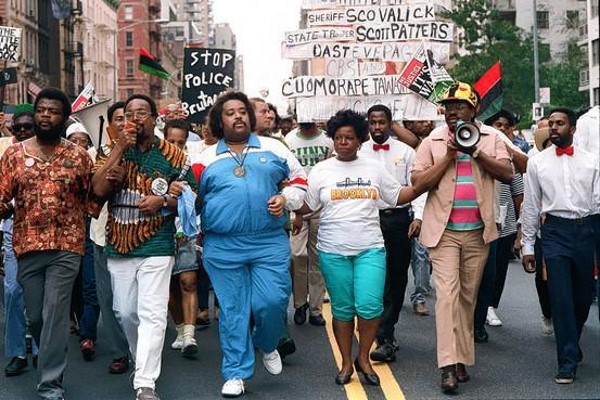 Relations between blacks and Jews in the US have been poor since 1968, when the New York teachers strike pitted the overwhelmingly Jewish United Federation of Teachers against a black community-controlled school board. The traditional flirtation of the black community with various forms of Islam, from the homegrown version of the original Nation of Islam to the increasing numbers of black converts to more normative Islam, has added an anti-Zionist flavor; and there seems to be no lack of outright anti-Jewish agitators like Louis Farrakhan, Al Sharpton, and of course Jeremiah Wright.

In this context, the appropriation by anti-Israel elements of the ‘Ferguson’ movement against police violence and putative racism makes sense. There is, they think, a fertile field in the black community to plant with comparisons between blacks and Palestinian Arabs, between the PLO and Hamas and the SCLC, SNCC, CORE, etc. groups that fought the battle against Jim Crow in the South in the 1950s and 1960s.

The complete absurdity of these comparisons is lost on those who don’t understand the racism, violence, and genocidal attitudes that characterize the real Palestinian movement, which is precisely a movement opposed to human rights. But who cares about reality?

Now it appears that US President Obama isn’t helping, by trying to make the US-Israel relationship not only a partisan affair, but a racial one.

As he ratchets up the pressure against Netanyahu, after falsely claiming to be ‘blindsided’ by his acceptance of an invitation from Speaker of the House John Boehner, it seems likely that Obama specifically asked members of the Congressional Black Caucus to boycott Netanyahu’s speech:

Two prominent black Democrats in the House of Representatives are vowing to skip Prime Minister Benjamin Netanyahu’s speech to Congress next month, a move that a White House insider says was put in motion by the Obama administration.

John Lewis of Georgia and G.K. Butterfield of North Carolina both said Friday that they disapproved when House Speaker John Boehner invited the Israeli leader to address a joint session of Congress on March 3 without consulting President Barack Obama first.

That disapproval apparently was orchestrated, or at least strongly encouraged, by the White House through communications with lawmakers connected to the Congressional Black Caucus.

‘But yeah, the White House sent a message to some at the CBC that they should suddenly be very upset about the speech.’

The president is worried that Netanyahu’s speech might prompt some members of the legislative branch — which he wishes would go away and leave him alone to make a potentially disastrous deal with Iran — to oppose said deal. He apparently doesn’t care what he has to do to discredit Netanyahu, and that seems to include dynamiting any vestiges of support for Israel among African-Americans by arranging a black boycott of his speech.

The Iran deal is of great importance, not just to Israel, but to the entire region and to the US as well. The Washington Post — which is considered a liberal newspaper and which supported Barack Obama in 2008 and 2012 — wrote in an editorial on February 5 that the proposed deal has three major failings:

● First, a process that began with the goal of eliminating Iran’s potential to produce nuclear weapons has evolved into a plan to tolerate and temporarily restrict that capability.

● Second, in the course of the negotiations, the Obama administration has declined to counter increasingly aggressive efforts by Iran to extend its influence across the Middle East and seems ready to concede Tehran a place as a regional power at the expense of Israel and other U.S. allies.

● Finally, the Obama administration is signaling that it will seek to implement any deal it strikes with Iran — including the suspension of sanctions that were originally imposed by Congress — without a vote by either chamber. Instead, an accord that would have far-reaching implications for nuclear proliferation and U.S. national security would be imposed unilaterally by a president with less than two years left in his term.

Rather than contest the Iranian bid for regional hegemony, as has every previous U.S. administration since the 1970s, Mr. Obama appears ready to concede Iran a place in Iraq, Syria, Lebanon and beyond — a policy that is viewed with alarm by Israel, Saudi Arabia, Jordan and Turkey, among other allies.

Whatever his motives, President Obama wants this deal. Many members of Congress, and not just Republicans, are very uneasy about it. PM Netanyahu is taking a great risk — both from possible retaliation by the US president and from the use his electoral opponents are making of this issue at home — by making this trip.

Obama’s use of the so-called ‘race card’ is contemptible and only emphasizes more strongly the lack of moral stature that characterizes this president.