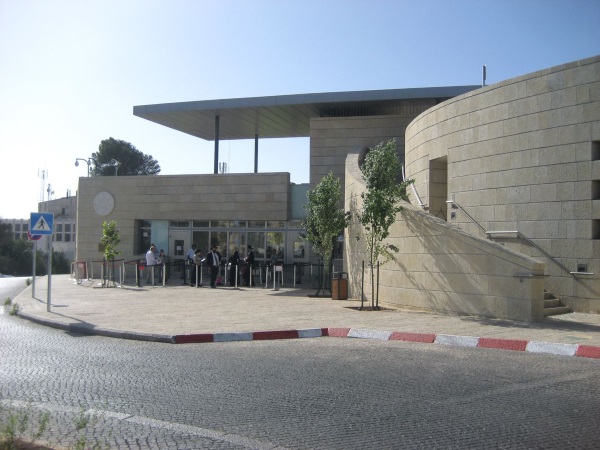 US Consulate, Jerusalem. The Embassy to ‘Palestine’

The US Consulate in Jerusalem has always been the “Embassy to Palestine,” even though its intended purpose is to provide services for US citizens in Jerusalem and the territories. Most of the staff are Palestinian Arabs, and it runs educational and cultural programs for Palestinian Arabs.

Now there are reports that the head of security there is hiring, training and arming Palestinian Arabs as guards (keep in mind when you read this that this consulate is located in the capital of the state of Israel):

A scandal has erupted in the American Consulate in Jerusalem, as three Israeli security guards have quit following a plan to hire 35 armed Palestinian guards from East Jerusalem. The Palestinians have been undergoing weapons training in Jericho in recent days.

The decision to hire and arm the Palestinian security personnel was made by the consulate’s chief security officer, Dan Cronin. The plan is to employ them mostly as escorts to American diplomats’ convoys in the West Bank. Their operating base will be at the consulate in the city’s west, as well as six other facilities around the city belonging to the consulate, of which five are in western Jerusalem.

The plan is a breach of a 2011 agreement between the consulate and the Israeli government, which determined that only former IDF combat soldiers hired by the consulate would be allowed to carry weapons. That year, Israel gave the consulate approval to keep about 100 guns for its security guards, but only if they’re American diplomats or Israelis who served in the army. While the consulate employs scores of guards from East Jerusalem, they have not been armed up until now. …

According to these sources, some of the Palestinian guards have been arrested in the past for throwing stones, or have relatives who were convicted of terrorist activity. “The consulate’s conduct is extremely biased towards the Palestinian side, and Cronin is actually raising an armed militia of Palestinians in the consulate. They’re trained in weapons use, Krav Maga, and tactical driving. This is irresponsible. Who is ensuring that putting this weaponry in Palestinian hands will not lead to terror?”

The most senior advisor to the consul general is a Palestinian who served time in Israeli prison because of membership in the PLO. Another employee is related to one of the leaders of Hamas in Jerusalem, Mohammed Hassan Abu Tir, who has served numerous sentences in Israel’s penal system.

The consulate responded that “there are many inaccuracies in the claims.” Let me translate: “they are essentially true but we found some details that were wrong.”

Recently there was an incident in which American security guards allegedly aimed guns at Israeli Jews while conducting an uncoordinated ‘investigation’ of Arab complaints against a nearby Jewish community.

The US has an arrogant attitude with respect to Israel, which is basically “if it weren’t for us you’d all be dead, so do what we tell you.” I am not sure that this is so, especially in the Age of Obama, and I’ve urged that Israel do its best to reduce every form of dependence on the US.

The creation by a Western power of a paramilitary force made up of Arabs in the land of Israel has a precedent: the British-armed, financed and led Arab legion, which was probably the most effective of the military forces facing the new state of Israel in 1948. I think we would prefer not to go there again.

There is no way that Israel should allow this violation of its law and its sovereignty in its capital. Can you imagine the Israeli consulate in Washington DC hiring local non-citizens, some of whom had been arrested for attempted murder (“throwing stones”) or were associated with street gangs (the PLO), giving them guns and training them in their use?

Israeli law about carrying weapons is actually quite strict today, and I guarantee that individuals with records as above would not be permitted to have guns.

If the US needs an “Embassy to Palestine” then I suggest that it be located in Ramallah or Gaza City.

4 Responses to Armed Palestinian Arabs to guard “Embassy to Palestine?”