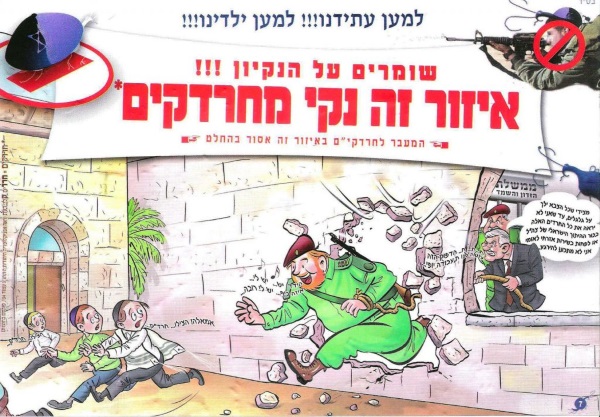 One of the interesting things about the State of Israel is that it is suffused with people that hate it and want to destroy it.

Some Jerusalem Arabs, for example, are doing their best to destroy the light rail system that services Jewish and Arab neighborhoods. Why? Because it serves Jewish and Arab neighborhoods. It represents coexistence or ‘normalization’. And these Arabs, who are permanent residents of Israel with all the benefits except the right to vote, could have full citizenship for the asking. But they are proving a Palestinian nationalist point by spurning it — and by attacking any manifestation of good relations between Arabs and Jews.

Not every anti-Zionist is an Arab. There are also those among the Haredim who hate the state. The illustration at the top of this post is a poster opposing efforts to draft Haredim that has appeared in Haredi neighborhoods:

“Keep this area clean!” one poster bellows in red ink, mimicking an oft-repeated slogan of kitchens and bathrooms across Israel. Above and below that line, however, it says, “For the sake of our future! For the sake of our children! … This area is free of Hardakim!”

“Hardakim” is a bastardized term for Haredim who join the army, coined from an acronym, Haredim kalei da’at, or “weak-minded Haredim.” It’s no coincidence that the term is strikingly close to the word “haydakim,” meaning bacteria or microbe – exactly the sorts of creepy crawlies that put cleanliness at stake.

This particular image shows a grinning buffoon of a soldier barreling through a stone wall in pursuit of a trio of terrified Haredi boys crying out for their mothers. In the top left corner, a knitted skullcap –- known across Israel as a symbol of the religious Zionist movement, or those Orthodox Israelis who integrate into modern society and willingly serve in the IDF -– morphs into a cockroach or some other ambiguous bug. …

With long hooked noses and clownish bodies on the IDF soldiers, angelic postures for Haredi children and themes of contamination versus cleanliness, the posters bear a disquieting resemblance to the Nazi propaganda that was plastered across the streets of Berlin and Munich in the years before World War II, critics say.

If this isn’t enough, we have the post-Zionist Left, the ones exemplified by Ha’aretz writer Gideon Levy and journalist Rogel Alpher. Their Oslo-syndrome guilt is so pathological that for them, Israel can do no right. Alpher urges enlightened Israelis to flee the country, and Levy grinds out the most vicious anti-Israel propaganda week after week.

Finally, among the immigrants to Israel from the former Soviet Union, there are, incredibly, old-fashioned Jew-haters, including neo-Nazis.

All of these anti-Zionists and Jew-haters benefit from the modern, developed, tolerant and democratic state of Israel in which they live, while at the same time they try to kill it.

Israel is a country of 8 million, not 316 million like the US, and it faces a great challenge from the organized opposition to its existence from Iran and other Muslim nations, the UN, and various Jew-haters throughout the world. It doesn’t need internal enemies.

My proposal is to resurrect the disreputable idea of a loyalty oath. Everyone — Jews, Arabs, other non-Jews — everyone living in and benefiting from this island of sanity in the crazy Middle East, should be asked to affirm their loyalty to the state if they want to live in it. They don’t have to agree not to criticize its policies, but they have to agree in principle to the idea that there ought to be a Jewish state, they will obey its laws, and that they will not try to subvert it.

Every minority — and that includes Haredim — will have to understand that there is one state and its laws apply to everyone. There are alternatives for the anti-Zionists: there are 22 Arab countries plus the Palestinian authority for Arabs to choose from; there are Haredi communities in the US and Europe where they will not have to serve in an army or do national service; there are ‘enlightened’ European countries for such as Levy and Alpher. And of course the Russian Jew-haters can go back to Russia.

The idea of a loyalty oath was very unpopular. It was called racist, anti-democratic, fascist, etc. I know the Arabs will cry bloody murder at such a proposal. They already have.

2 Responses to Reconsider the loyalty oath