Posted on October 5, 2014 by Victor Rosenthal 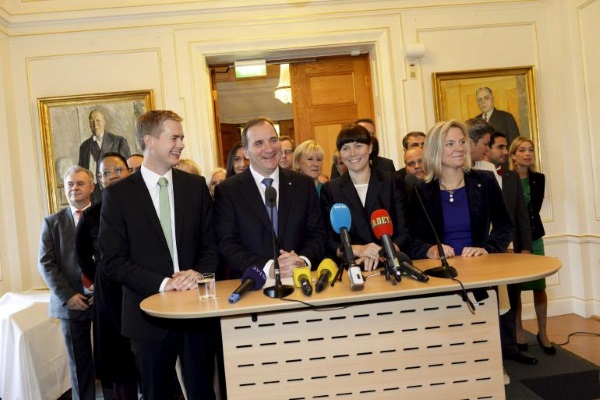 European governments, in part responding to pressure to appeal to Muslim residents, to appease oil-producing nations — who haven’t stopped wanting to weaken Israel despite their worries about Iran — or perhaps because of anti-Jewish feelings that are under the surface, are pressing harder than ever to give another piece of the land of Israel to the Arabs.

In a brilliant example of non-sequitur argument, Sweden’s new Prime Minister, Stefan Lofven announced in his inauguration speech that

The conflict between Israel and Palestine can only be solved by a two-state solution, negotiated in accordance with international law. It must guarantee both the Palestinians [sic] and Israelis’ legitimate demands for national sovereignty and security …

A two-state solution requires mutual recognition and a will to peaceful co-existence. Sweden will therefore recognise the state of Palestine.

This is the first time a sitting member of the EU has recognized ‘Palestine’, a non-state that has no borders, economy, control of its population, or legitimate government (elections are four years overdue in the Palestinian Authority). Nevertheless, international recognition is one of the most important prerequisites for statehood, and Sweden’s action will be significant.

It should be obvious that Lofven’s statement makes little sense. Palestinian demands for sovereignty do not come from a desire for peaceful coexistence — otherwise there would already be a Palestinian state — but to make Israeli security, and ultimately Jewish sovereignty, impossible.

The ‘legitimate demands for national sovereignty’ made by Palestinian Arabs are not equivalent to those of Israel, because they are disingenuous. They are part of a program to deny Jewish sovereignty and to possess the land and property of the Jews of Israel. A “two-state solution” as envisaged by the Arabs and doubtless by Lofven involves Israel ceding control over areas that are essential to its security.

The Arab position also includes a right of ‘return’ for the descendents of Arabs that fled the country in 1948, which would convert Israel into an Arab-majority state. The PLO (not to mention Hamas) doesn’t hide its intention to continue the struggle until “all of Palestine is liberated.”

The Europeans are able to rationalize their behavior — which just happens to be politically advantageous — by appealing to the historical and conceptual narrative sold by the Arabs and other enemies of Jewish sovereignty. The narrative portrays the establishment of the state of Israel as an act of colonialist expropriation of indigenous land.

As I’ve said before, this requires a massive distortion of historical fact – suddenly, Arabs from Syria or Egypt who had been in Palestine for one or two generations have to be presented as the remnants of a millennia-old ‘Palestinian’ civilization, and Jews who were hated and exterminated in Europe have to become ‘European colonialists’.

Nevertheless, this fits perfectly with the post-colonial worldview that is popular in academic and left-wing circles. The effect is to sanctify what is really a racist attempt to end Jewish self-determination in the only place it exists in the world and ultimately to ‘purify’ the Middle East by ridding it of Jews.

Unfortunately this point of view has become the conventional wisdom in much of Europe, which is suffering from dual guilt for its responsibility for several hundred years of real colonialist exploitation throughout the world, and of course the murder of millions of Jews by the Nazis (with a great deal of European cooperation, thank you).

If the new Swedish PM would like to improve the lot of the Palestinian Arabs, he should favor a form of less-than-sovereign autonomy for Arabs in parts of the territories, with overall Israeli security control over borders, airspace, etc.

But that will never happen, because according to the conjunction of post-colonialist doctrine and political correctness that has infected the dying European societies, every group that claims indigenous status (except for Jews) has a right to sovereignty. And the more violently that group behaves, the stronger their claim.

This entry was posted in Europe and Israel, Israel and Palestinian Arabs. Bookmark the permalink.