Bring this up at the iftar dinner 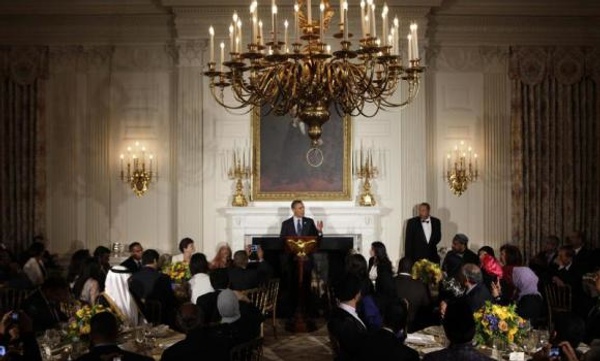 Every year since 1996, the US President has hosted an iftar dinner in observance of Ramadan. This one was in 2012.

Statement by President Obama on the Occasion of Ramadan, June 27, 2014

On behalf of the American people, Michelle and I extend our best wishes to Muslim communities here in the United States and around the world on the beginning of the blessed month of Ramadan.
…
Ramadan also reminds us of our shared responsibility to treat others as we wish to be treated ourselves and the basic principles that bind people of different faiths together:  a yearning for peace, justice, and equality.  At a moment when too many people around the world continue to suffer from senseless conflict and violence, this sacred time reminds us of our common obligations to pursue justice and peace and to uphold the dignity of every human being.

It’s been 15 days since the kidnapping of three Jewish boys on their way home from school. They are, if alive, being held by terrorists under conditions that one tries not to imagine. You, President Obama, who have said that there are “unbreakable bonds” between the US and Israel, have not seen fit to mention this in public, despite requests from Jewish organizations and individuals.

I suppose you want to remain above the fray. If you condemn the kidnapping, then Palestinian supporters will demand that you also condemn a whole litany of ‘crimes’ alleged to have been committed by Israel. Best just keep your mouth shut, say your advisers.

The problem with this policy is that it implies a) a moral equivalence between the terrorism that’s an integral part of the Palestinian/Arab/Muslim war against Israel, and Israel’s efforts to defend herself; and b) an assumption that accusations made by pro-Palestinian sources are equally reliable as statements of the government of Israel.

Both of these equivalences do not hold, and your acting as though they do is not an indication of fairness — rather, it demonstrates your bias in favor of the Arab side.

Further, it is both an insult to the Jewish people and their state, and contrary to the wishes of the majority of Americans who — despite the efforts of your administration and its media Pravdas — still support Israel.

You and your advisers are smart enough to make the distinction between terrorism and self-defense, truth and lies. When you don’t do so, the only conclusion left to draw is that your ‘support’ for Israel is only lip service.

If you believe that even Palestinians have “obligations to pursue justice and peace and to uphold the dignity of every human being,” as you said in your Ramadan message, then why don’t you demand of the Palestinian Authority that it nullify its agreement with the perpetrators of this ugly crime, Hamas, and ensure — as Congress clearly instructed you to do — that not one penny of US aid gets into the hands of Hamas or is paid to convicted terrorists, including murderers, in Israeli custody.

Bring it up at the iftar dinner. I’m sure all of the guests will agree that kidnapping teenagers is a despicable tactic.

This entry was posted in Terrorism, US-Israel Relations. Bookmark the permalink.