More on the nakba-day ‘massacre’ 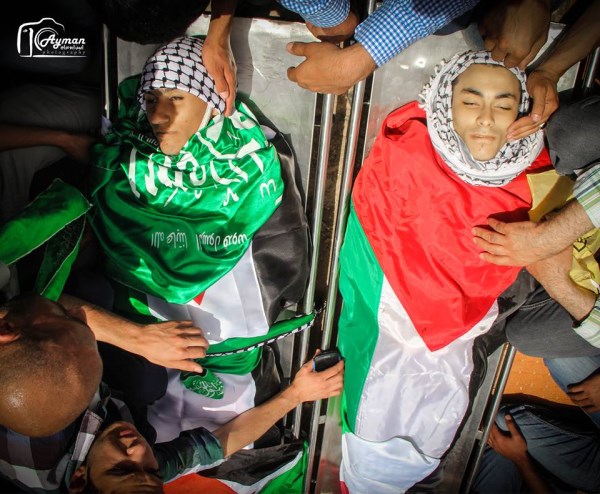 Bodies of two Palestinians killed on May 15, 2014, wrapped in Hamas and PLO flags

The nakba-day shooting of two Palestinian ‘children’ has grown legs and is galloping around the world.

Both the UN and the US are demanding “transparent” investigations by Israel. The US State department has even tweeted its “condolences” to the families (can you imagine Israel demanding that the US investigate its drone-killings of Pakistani noncombatants, or expressing its condolences to the families of al-Qaeda terrorists it does kill?)

Given the multitude of of ‘Pallywood’ productions — fake videos used to impeach the IDF created by the Palestinians and distributed by gullible (often deliberately so) media — it behooves us (and the US State Department as well) to be extremely suspicious of such ‘evidence’ of Israeli atrocities.

It appears to be true that two Palestinians (whether they were ‘teenagers’ is  unclear) were shot dead last Thursday. But it is not at all certain that the video that was distributed shows the actual shooting, or the actual individuals who were shot.

The video appears to show two Palestinian youths, apparently far from any action, suddenly falling down. There are many aspects of it that raise questions: the way they fell, the lack of blood, the relationship of the reported wounds to the direction the fire is supposed to have come from, the way bystanders immediately rush in (unafraid of further shooting) and call cameramen over, etc.

Before convicting the IDF of murder, let’s consider the very likely possibility that two young men (one of the accounts puts one’s age at 22, and Hamas has claimed one as a member) were killed in a direct confrontation with the IDF — and the video was faked by actors in order to give the impression that innocent children who posed no threat were shot down in cold blood.

Frankly, I don’t believe the vicious lie that the IDF deliberately targets children — a case of projection if I’ve ever seen one, by the folks who gave us the Ma’alot massacre (22 children), the Bus of Blood (13 children), the Dolphinarium bombing (21 children), and who fire anti-tank missiles at schoolbuses (1 child). So I am much more likely to believe that the video is a fake.

I agree, therefore, with the US that there should be a complete and transparent investigation. The dead Palestinians are probably already buried, but if necessary they should be dug up, identified and autopsied. Evidence must be collected from the scene(s) and witnesses interviewed by investigators (and not only by pro-Palestinian media).

Yes, it would cause pain to the families. But IDF soldiers have been accused of deliberate murder of innocent children. That causes pain too.

1 Response to More on the nakba-day ‘massacre’